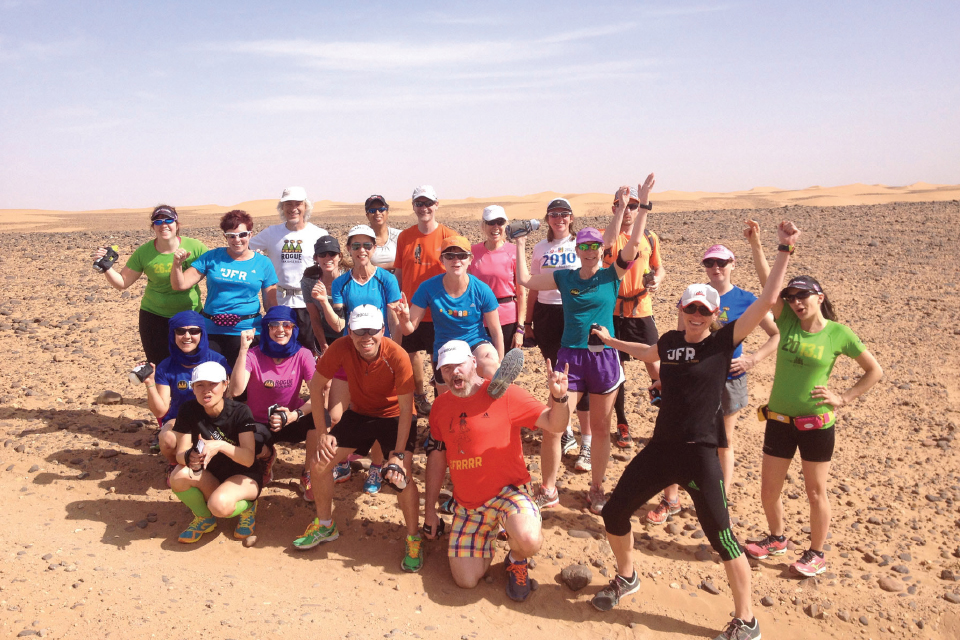 How did you come to be involved in this business?

Pure destiny, it seems. Running and travel are two things that have shaped my adult life. I was a competitive collegiate runner before graduating early to backpack Europe—my first real travel experience. I moved to Austin after that and lasted about two years in a “real” job before deciding to go teach English in Thailand, which led to a year of traveling around Southeast Asia with my then-new boyfriend, Gabe Steger. Upon returning to Austin in 2009 I began working for Rogue Running as a graphic designer and coach, and also competing for their professional team, Rogue Athletic Club (formerly Team Rogue Elite).

After a great race at the 2012 Olympic Marathon Trials, Gabe and I took a celebration trip to Morocco. Though we are die-hard independent travelers, we needed someone to take us into the Sahara and by chance met a very trustworthy guide, Hamid (also now a lifelong friend). During our stay at his family’s camp in the dunes, we sat under the stars and talked about other trips that he had led. He mentioned a small group of French runners who have him set up run support for a weekend trip each year.

Immediately, Gabe and I looked at each other, and we promised a skeptical Hamid that we were coming back with runners the next year. Over the course of that year, Gabe and I established the route, figured out the logistics, and advertised the trip through Rogue Running. We had no idea that it would be such a hit: 20 people signed up on Day One, and the trip was a huge success, far exceeding our expectations. Word of our trip spread fast, and we were approached by runners asking where we were going next; we quickly realized that this could—and should be—something big.

What are the goals for each trip? Do they vary depending on location, or do you approach each destination with the same focus?

The formats are a bit different for each trip. The domestic trips are shorter and have a home base; the group stays in a house or cabin, and we have runs set up each day on various area trails, with the rest of the time spent relaxing, eating, drinking, and exploring the “must-sees” of that particular region. These trips are a chance to seriously unwind while getting to run in gorgeous spots in an intimate group atmosphere.

The international trips are more expedition-style, as we travel a set route throughout the country, staying in a different location most nights. Each day, there is some amount of drive time with runs set up in amazing locales, always different from the day before. Each night, we stay at very comfortable accommodations ranging from guesthouses to hotels to luxury safari camps, depending upon the location. These trips offer a full-on travel experience: we see the sights, engage with locals, eat the food, and truly learn a lot. People have the chance to really dive into a culture and a place while we handle all of the details, so that all they have to do is fully enjoy the experience.

With both trip styles, the ultimate goal is the same—to get outside, put feet on the ground, and experience a place in a way that would never be possible from a tour bus. There are a million destination races out there, which are great, but so much time is spent preparing, resting, and dealing with pre-race nerves and logistics that people rarely get to enjoy the actual destination. Rogue Expeditions first and foremost offers a travel experience with running as a unique and rewarding way to go about it. Crossing the finish line at a race is, of course, a big and often memorable accomplishment, but the memory of running through a small village in the High Atlas Mountains of Morocco, high-fiving a group of local kids as they run alongside, will be etched into your memory forever.

What is included in the trip? What’s the price range?

All trip prices include everything except flight, alcohol, and tips. I offer a lot of guidance and suggestions when it comes to booking flights, but that is done individually. Once there, it’s worry-free: airport transfers, meals, hotels, guides, vehicles, drivers, running routes, and support are all taken care of. The price varies by trip, as costs and trip length differ from destination to destination. Morocco is an extremely affordable international option, whereas Kenya is a much higher price point (but is longer and includes lots of safari, an in-country flight, and luxury accommodation). Domestic trips, shorter in length, are under $1,000, while the international trips range from $2,050 to $4,650.

How big (or small) is a typical group? What’s the ratio of trip guide to attendee?

For domestic trips, we take five to ten people, with two or three guides present and handling everything. On international trips, we take 15–18 people and have a team of six to eight guides, drivers, and cooks managing the trip.

We initially worried about group dynamic problems, but that has completely been a non-issue. Every group that we’ve traveled with has bonded almost immediately, and the number of close friendships that have developed from our trips has been astounding. We’ve had plenty of couples and pairs of friends join us, but singles have dominated by far; it’s been so neat to see how quickly the family-like atmosphere develops, and how close the group remains after the trips end.

People might be concerned about pace. How do you handle big varieties in running pace?

One of our biggest focuses is to make these trips accessible to all levels. We’ve had a power walker and a marathon-a-day ultra runner on the same trip, and things were smooth. Point-to-point runs have vehicle support so that there is always water and a ride available (one vehicle stays in front, one in back, and the others monitor everything in between), and out-and-back runs are easily adjustable to all ability levels. Gabe, myself, and the rest of our team keep close tabs on everyone and make sure that everything possible is done to ensure no one ever feels alone or left behind…but also not hovered over.

Most people find someone near their ability level, and everyone is super supportive of each other; there’s always lots of cheering, encouragement, and photo taking. Walkers are welcome, and many people who aren’t accustomed to daily running choose to walk a few of the days. This is especially well suited for trail running trips, since terrain and altitude often require a fair amount of hiking for those who aren’t experienced trail runners. Anyone can choose to ride in the vehicle if they need a rest day, and we’ve also had a few non-runners go on our trips and have a great time.

How do people know if they have the appropriate level of fitness for a trip?

As I mentioned, we truly adapt the trips to all levels. There may be some requirements in the future; for example, there will be a mandatory 10-mile day in Patagonia with no vehicle option, but walking or hiking it is fine. We’ve found that most everyone wants to get out and run (or walk) every single day regardless of how prepared they may be, because each day is so different and no one wants to miss a thing. It’s amazing how much more people can do when they are excited.

The most important thing is to be adaptable, open-minded, and excited about some active adventure.

Who determines the trip location and what are the criteria for selection?

That’s been an interesting question as we’ve begun to grow. Morocco happened by chance, as did Kenya; we were introduced to the right partner through a Morocco participant. As we look ahead, we are trying to take a lot of input from the community through social media channels and in person. Patagonia was a hugely popular idea, so we utilized personal connections and research to find the right local partners and took a development trip back in January.

We aim to choose places that people wouldn’t perhaps think to travel to on their own (or at least not run through). A perfect balance of beautiful scenery, bucket list-worthy sights, safety, open places to run and cultural richness is the goal. Although all of the trips are comfortable and as stress-free as possible for clients, we encourage people to step outside of their comfort zone a bit; that’s where the real experiences and memories and personal growth happens.

Do you have a particularly memorable story from a trip?

It’s incredibly difficult to pick one story, but there was an incident on our first Morocco trip that comes up over and over again. The group had been traveling and running together for eight days, with Hamid and five drivers as our local support crew. The Moroccan guys were amazing with water support and cheers but were nowhere near runners themselves. As this was our first trip together, they were somewhat bemused by the whole concept of running for enjoyment, especially on holiday; they are accustomed to working with tourists who just want to be driven around for photo ops.

As we prepared to start the run on our final day, one of the drivers handed his keys to Hamid. He was an older man who had spent the entire trip quietly driving (he didn’t speak much English) and taking smoke breaks whenever he could. But on this day—without ceremony—he began the run with us. Despite the fact that he was dressed in slacks, a sweater, a beat-up pair of shoes and a turban, he continued to run. For ten miles. We were all blown away—ten miles, just like that. Once he finally stopped, there were high fives and cheers and laughs; he made it clear that he was destroyed, but the huge smile on his face said that it was totally worth it.

Over the course of our two trips in March 2014, every single one of those drivers joined in for at least one run, often wearing jeans, and Hamid joined us multiple times, constantly asking Gabe to take over the driving for a bit so that he could go running with the group.

We all know that runners have an instant connection with other runners, and it was amazing to see how that applies over cultural and language boundaries. We had inspired them to try, and in turn, they went from “the drivers” to “friends” almost instantly. Cheers and support went both ways and bonds were formed. Running truly is a powerful thing.