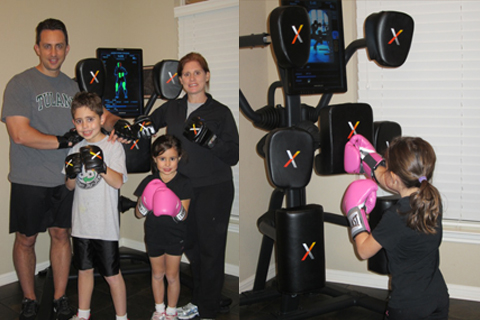 When asked to review the Nexersys iPower Trainer, I immediately thought of the scene from Rocky IV where Ivan Drago displayed his devastating punching power by striking a compression target that provided a digital readout of his superhuman strength (1,850 psi if memory serves me). As a high school athlete in the 80s, I was captivated by Rocky IV with the contrasting styles of Drago training in a state-of-the-art facility versus Rocky’s grit and iron will working with rusted equipment in an old dusty Siberian barn. As we know, Rocky’s raw determination won out over the superior physical and technological advantages possessed by the Russian. Interestingly, even today many athletes are choosing workouts that more closely resemble the “old school” style of Rocky Balboa – opting for full-body functional routines using kettle bells and flipping large tractor tires as opposed to highly specialized machines. That’s not to say that I’m not on the lookout for that rare new piece of equipment that offers the perfect blend of technology and functionality. However, such devices seem to be the exception rather than the rule. As such, I treat any new fitness machine with a healthy degree of skepticism. In short, is there a more effective and efficient way of replicating the same workout that doesn’t require a machine or specialized device? Additionally, is this a workout that I want to include in my regimen given all of the competing options?

Importantly, the Nexersys experience and associated review wasn’t mine to make alone as my wife, my nine-year-old son, and six-year-old daughter would be offering their input as well.

Prior to delivery, we had the all-important decision of where to put the unit. Thankfully, my daughter was more than happy to allow this “cool new toy” to temporarily displace her kitchen-set in her playroom (more on this later).

Not a DIYer, I opted for the “white-glove” option which included full assembly upon delivery. In retrospect, it doesn’t seem like the assembly would have been too difficult – though it seems like a job best suited for two. I was immediately impressed with how durable the unit’s frame appeared to be. Although the Nexersys unit that I tested was the home version, it has the appearance and structure of a commercial-quality fitness machine, not the common flimsy-looking home exercise equipment sold at the local sporting goods store. From my understanding there’s an even beefier commercial version that weighs 100 additional pounds. Aesthetically the home-version unit would look great in the nicest of home gyms, or in my case, the corner of my daughter’s playroom.

For our evaluation, we were provided with various sizes of Mixed Martial Arts (MMA) style gloves that allow for more hand mobility than standard boxing gloves. My son enthusiastically had the gloves unpackaged and on his hands well before the unit was plugged into the wall. For my daughter’s little hands we took a quick trip to Academy to purchase pink Everlast boxing gloves. She was giving up her playroom after all.

It was finally time to power up and test the Nexersys. In place of a human trainer, Nexersys comes standard with a CPU and 19” LCD Monitor to view countless hours of video rounds and training programs that focus on Core Strength, Cardio, and proper Striking. The program is adaptive and will create unique sessions based on one’s prior training history. Instead of punching mitts, the unit has seven strike pads located at key target zones (head, body, and legs).

There’s an eight-minute tutorial that provides a walk-through on the basic usability, including navigating from one program to the next. Navigation on the screen is done by pushing the various strike pads. The pads function as the system’s mouse. This is also how profiles are created. In total, Nexersys allows for five unique profiles that family members and friends can use to track their individual performance and goal attainment.

For our first test, we selected a seven-round workout on Beginner. Users can choose from Beginner, Intermediate, and Advanced (though the tutorial recommends starting at Beginner and progressing naturally based on performance). Within minutes, my heart rate was elevated as the onscreen trainer had me transitioning between running in place, punching combinations, high knees, and squats. Nexersys stresses proper technique, accuracy, and speed as opposed to brute strength. In fact, the unit will issue a warning for punching too hard and will make suggestions on stance and positioning. Admittedly I was issued a warning or two during my first few rounds but found that by adjusting my stance and focusing on the recommended technique I was able to avoid future warnings. After completing the seven-round workout, I was exhausted. It was truly a full body workout that incorporated a little bit of everything: coordination, speed, core strength, and cardio.

It was now time to pass the baton to my wife. The entire unit can be raised and lowered vertically so the pads are set to the proper height for the individual user. After a quick adjustment, she was ready for combat and determined to best my performance with quicker hand speed and better accuracy. It instantly became apparent that training on the Nexersys would become competitive within our household. My wife was a fan of the unit immediately; she loves attending various strength, kickboxing, and cardio classes at our health club. Yet her availability doesn’t always coincide with various class times. She sees Nexersys as offering everything that she enjoys from her classes and more. For one, the full-body workout is specifically tailored to her individual progress, and by stressing proper punching technique, she is developing good self-defense. Not to mention, a session of punching and kicking is one of the greatest forms of stress relief.

My son and daughter then took their turns on the unit. Rather than put them through the workout that I had completed, we set the system to an Avatar Strike Round. This is more of a freestyle mode where successful punches and kicks are registered on the screen by various body parts of the Avatar turning red. There’s also an Avatar Follow Me mode which is analogous to Simon Says. In the Follow Me mode the Avatar lights up blue telling you where to throw strikes or combos. The Avatar was no match for the tag team combo of a six- and nine-year-old. Though my daughter didn’t have the reach to land any head-shots, she did some serious damage to the Avatar’s legs and mid-section. My son, on the other hand, tagged the head of the Avatar with his version of the flying Superman punch. From my understanding, Nexersys is developing a program specifically for children that will solely utilize the lower strike pads. This will be a great addition and truly help differentiate Nexersys from other home exercise systems that tend to be exclusively designed for adults.

After having the Nexersys in our house for roughly one month, I can confidently say that this product has the potential to deliver a serious knock-out blow to other home fitness machines. First and foremost, Nexersys is well positioned to ride the meteoric MMA wave. With the Ultimate Fighting Championship’s (UFC) recent Fox television deal, I believe that MMA is only going to become more ubiquitous as mainstream audiences develop a better understanding and appreciation for the sport. This will likely increase the popularity of leading products that are complementary to martial arts. Nexersys definitely fits within this category. From my understanding the product received a great deal of attention at the latest UFC fan expo held in Houston. Beyond the MMA segment, this product has the potential to appeal to any fitness enthusiast (ranging from beginner to expert) who is looking for a fun yet comprehensive workout. Nexersys got it right when it comes to blending technology and functionality. Whereas other machines use technology to try and replicate or replace a lift or movement with an often inferior method, Nexersys uses technology as a surrogate trainer and preserves the superiority of the basic techniques and movements. And like a human trainer, the Nexersys Trainer will create a unique workout each time you train, ensuring that the workouts don’t become boring or too routine.

As it turns out, my daughter has become the biggest fan of the Nexersys in our household. Without any encouragement on my part, she regularly dons her pink gloves and methodically practices her jab cross combos. Her kitchen-set is now a distant memory.

Your Fit Fido Can Still be in the Magazine!