Austin Anthem is not your typical supporters group.

The official fan club for Austin FC, Austin’s Major League Soccer team (which will play its first match in March 2021), Anthem was founded in 2013 as an advocacy group called MLS in Austin.

Initially, the group’s mission was exactly as it sounds — to bring an MLS team to Austin. But by fall of 2018, when all signs pointing to that dream finally become a reality, the group pivoted to its new goal, supporting Austin FC, and to that end, changed its name to Austin Anthem.

Now that it finally had its team, Anthem had new items on the agenda. Namely, defining what kind of supporters group it would be. The founders knew from the very beginning they wanted Anthem to be welcoming to all, and that mission has pervaded every part of the process. From picking t-shirts to providing input on the design of the stadium, to writing chants and picking songs for Zanate Musical Collective, the house band, to play.

“Austin is such a diverse town, and soccer is one of those sports that just crosses every boundary,” founder Josh Babetski says.

Soccer holds the title of the world’s most popular sport, and its fan base only continues to grow. But soccer fandom, especially in the United States, has a history of exclusivity.

“Before the MLS there was no soccer in the U.S., with the exception of the men’s national team, which — whatever,” Natalie Czimskey, Austin Anthem’s director of women’s engagement and a professor of communication sciences and disorders at UT, says. “You had to find a bar or a location that was showing foreign games. Then you kind of had to maneuver your way in and prove yourself to these groups of people, these tiny groups of people that were just pocket-watching soccer.”

Things have changed, Czimskey continued, largely due to the shifting nature of the way we watch sports, but that air of exclusivity remains in many parts of American soccer culture.

For example, Czimskey had negative experiences in the past at supporters group events, where she felt like the other (male) attendees felt the need to quiz her to determine her level of soccer knowledge. But at her first Austin Anthem meeting, that didn’t happen.

Sure, at that time, in the fall of 2018, the group consisted of mostly white men and a few women, mostly girlfriends and wives of other members, but they were conscious of their lack of diversity and knew it was a problem — a fact which thoroughly shocked and impressed Czimskey when she first got involved.

“This is wild that y’all are having these discussions and have this awareness about the need for inclusivity when, again, it’s largely a bunch of white guys,” Czimskey remembered thinking after attending her first volunteer meeting. “This is really truly at the root and core of this group, trying to make it a group for everyone.”

No one said that was going to be easy, however, especially with a 100 percent volunteer staff, most of whom had zero prior experience in a similar organization.

“We’re trying to figure it out. Nobody left us an instruction manual,” said Babetski, who by day runs program management for the software company projekt202. “Our goal is to be super inclusive and have everybody involved. I don’t know how to answer that for the Latinx community in Austin. I am not that guy. [I’m a] White Polish dude from Philly. I am absolutely not going to have that answer.” 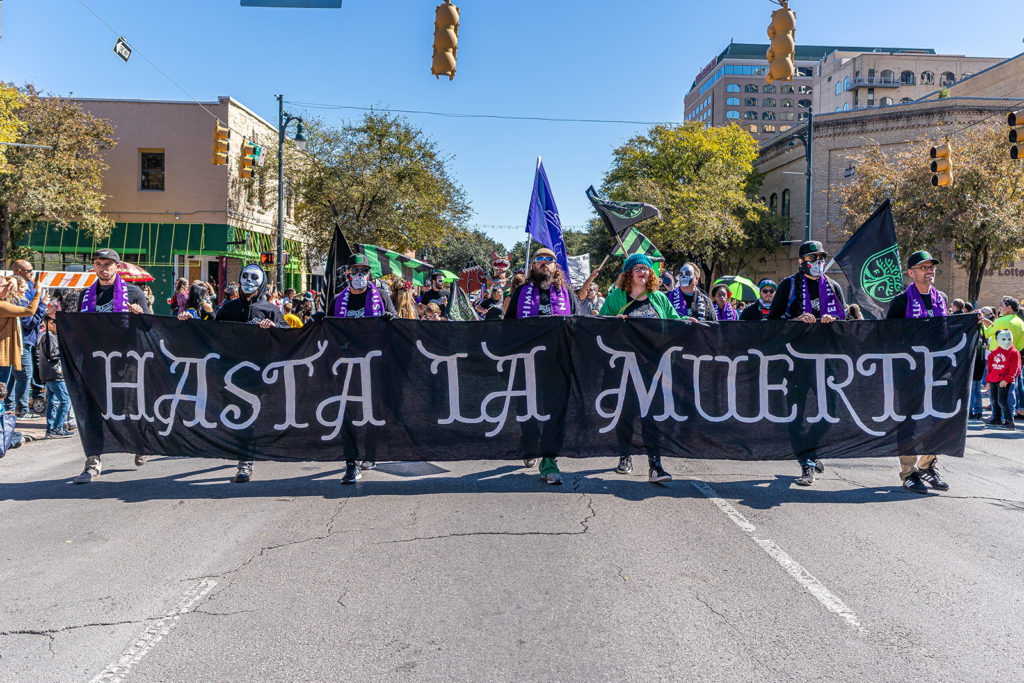 To find the answers, Anthem created special interest groups, which include, so far, accessibility, families, Lady Birds (aka the women’s group, headed by Czimskey), Latinx, LGBTQQ, philanthropy and community, and the band. Anthem’s leaders then soughtout subject-matter experts in the community who were willing to join the team and head up engagement for each group.

From the beginning, said Chavez, a civil designer for the city of Austin, he could tell Anthem genuinely wanted to engage the Hispanic community by the use of #LosZanates as its signature hashtag.

“Zanates is the Spanish name for grackle,” Chavez explains. “It’s kind of self-explanatory why we use grackles — they’re loud, they’re obnoxious, wherever they are, there’s a bunch of them — and so, what attracted me about that aspect is that they could have used as their mascot the grackle. But they didn’t. They used los zanates. That was important to me. They want to be seen as not just a supporters group with a little bit of Spanish people in there. No, they see us as equals.”

“We want to prove that we’re backing our words,” Babetski says. “We’re not paying lip service to, ‘Oh, we want to be inclusive because our website is in Spanish.’ No, it’s, ‘We have Latin culture woven into the things that we do because we have a Latinx team. We have members whose families hail from many different countries who are saying this is a way we can approach this.’”

Anthem’s intention with its special interest groups is not to create many niche supporters groups under one umbrella name, but rather to be a truly inclusive and diverse, big group, which promotes community and conversation across the city.

“It’s not really about making (the interest groups) special or different or even catering to them,” Czimskey says. “It’s not separate but equal or anything like that. It’s just, let’s make sure that our interests are thought of and provide a landing place if (the big group) is not where you want to start.”

Something about soccer makes it the perfect platform around which different groups can come together.

“You can go anywhere, be the most awkward person in the room, but if you bring up soccer, you have an immediate icebreaker,” Babetski says. “Now you go from wallflower to like we’re in the throes of ‘I hate that team,’ or ‘Your goalkeeper is…’ but you’re talking. You’re in an engaged conversation. Soccer will do that.”

“No matter what culture or background you have or language you speak just throw a soccer ball in a pitch and we have guys from all over the place playing with it,” Chavez echoed. “Someone from India has no problem watching a game from the German league or the Mexican league. They may not know the players, they may not know the teams, but they know this team is in black, this team is in red, there’s the ball. Simple.”

This unification, bonding and community building has already started happening, even though as Babetski pointed out, “we’ve got another year-plus before we kick a ball.”

“Now you see that diverse cross-section of people — people who wouldn’t talk to each other in line to get on an airplane — they’re hanging out, they’re friends, they’re starting relationships with each other,” Babetski says. “They’re getting each other to try different things or signing up for their clubs or their CrossFits or their volleyball teams.”

Anthem makes it clear that one particular group, however, will never be welcome in its ranks. Babetski calls them gatekeepers.

“People who are just like, ‘it should be this way and because you don’t do it that way, you’re somehow less validated in what you’re doing,’” Babetski explains.

Not only must Anthem battle to keep gatekeepers from infiltrating the group, but the org team also spends a lot of time figuring out how to avoid even the appearance of exclusivity.

“[Someone might think] I don’t know what the offsides rule is, I don’t want to ask because I don’t want to seem like a dumb newb, therefore I’m not going to ask and I’m not going to get involved,” Babetski says. He went on to list other thoughts that might make someone hesitant to come out to an event: “I’m different. I’m nonbinary, I don’t speak English well. I haven’t lived here in Austin long. I don’t know anybody. I know too many people. Whatever that is. What is the thing that is stopping you from just taking the step and just coming out and hanging out?” 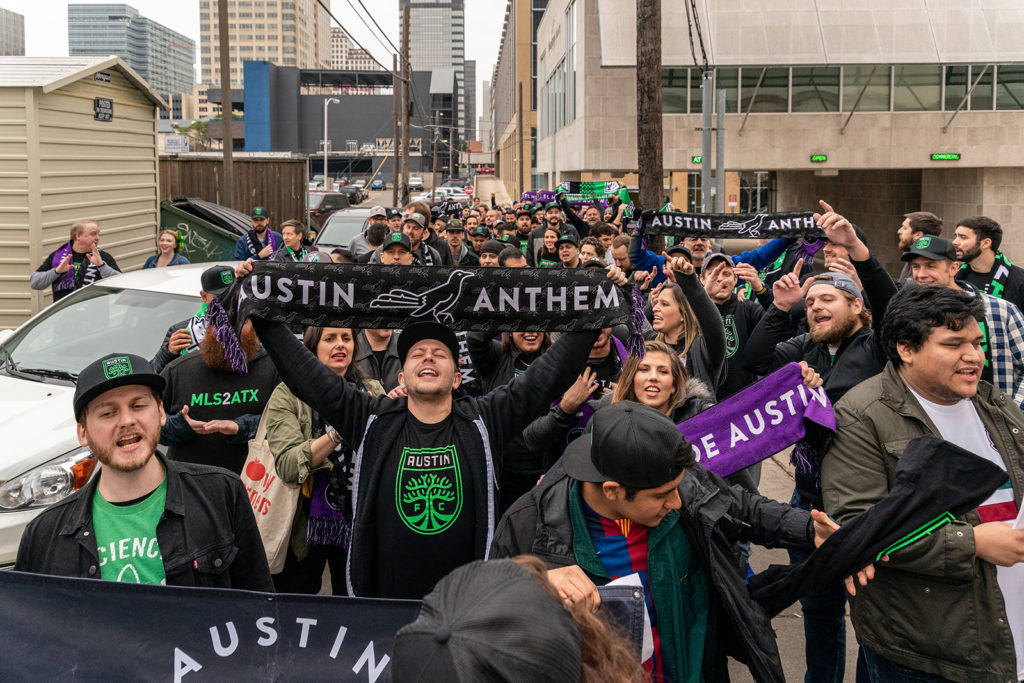 And just in case you were wondering, being an inclusive, welcoming supporters group will not equate to Austin Anthem being a bunch of polite, quiet and calm fans when March 2021 finally rolls around and they pack into the supporters section of Austin FC’s brand-new Domain-adjacent stadium.

“Nobody wants violence. Nobody wants to hear racial slurs getting yelled,” Babetski says, acknowledging that soccer fans — hooligans, if you will — have a bit of a negative reputation that doesn’t fit with Anthem’s established values. “But on the other hand, you do want our end of the stadium to be full of people screaming their brains out, yelling, cheering, taunting the opposition.”

“Inclusive” has evolved to mean a lot of different things in the past year since Anthem released its new name, branding and purpose. It has meant encouraging Austin FC to design a stadium that will accomodate all kinds of people, advocating for wheelchair accessibility, sensory inclusion rooms, nursing/childcare rooms, perhaps a family-friendly supporters section.

It has also meant planning a wide variety of events so that there will be something for everyone. Certainly breweries and bars and watch parties are popular, but Anthem knows that not everyone drinks or feels comfortable at a bar, so the group has made family friendly events and events at more food-focused or neutral locations a priority.

Over the summer, Anthem hosted watch parties for the Women’s World Cup, including one for the final match that absolutely packed Easy Tiger at The Linc. With the Latin-inspired horns and drums of the Zanate Musical Collective, also known as La Murga, leading the way, Anthem marched in the Pride parade and the Dia de los Muertos parade and has been on the sidelines at almost every home UT women’s soccer match this season. 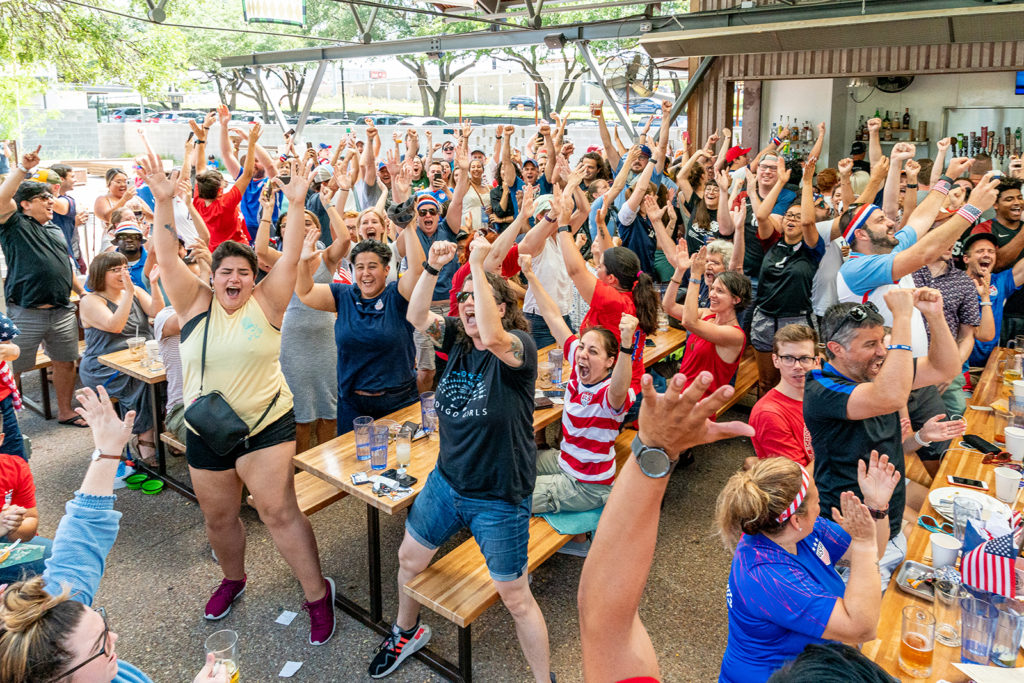 “We’re all trying to build something that speaks to the most people,” Babetski says. “It’s probably the weirdest social club you’ll ever get involved in.”

Which of course makes it the perfect supporters group for Austin’s very first professional sports team.