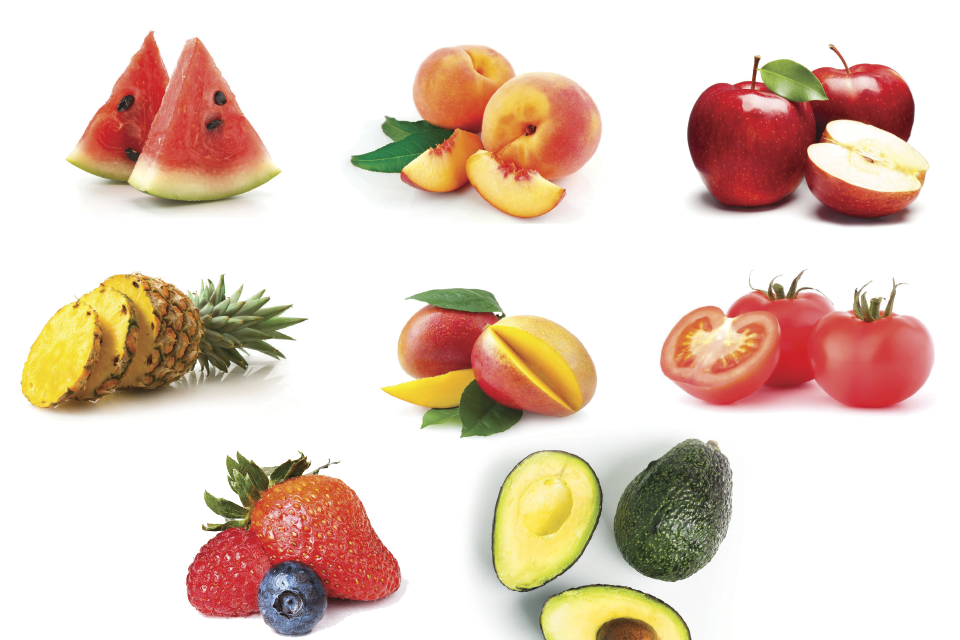 Produce sections are filled with treasures this time of year: bins piled high with juicy peaches, crates of berries, and massive melons. Rummaging around to find the freshest, most flavorful fruits and veggies often feels like a treasure hunt. But you’re never quite sure if you picked the right ones until they’re on the cutting board. How do you figure out which watermelon is the sweetest? Or which avocados are ready-to-eat? Elias Valerio, produce coordinator at Austin’s Wheatsville Co-op, shared with us his expert tips for picking the best produce.

WATERMELON
You may have heard the best way to select a watermelon is to find one that sounds hollow. But there’s a better way, Valerio says. Look for one that has a “nice big yellow spot on the belly — That means it’s been sitting for a while and was given a chance to mature in the fields.” He also looks for scars, marks made by bees as the watermelons were developing. “Bees know where the sweet stuff is,” he says. “I’ve never bought one with a bee sting on it that wasn’t nice and sweet.” The heavier the better—it will be full of juice.

PEACHES
The last thing you want to discover on your perfect peach is a bruise. If peaches are packed high in the store, you’re more likely to find bruises or scars. Local Texas peaches have a shorter journey to the store and will likely be in better condition. “I always look for a peach that’s nice and firm, not hard, no signs of scarring or mold on the outside,” Valerio says. A ripe peach will have a light peach smell, adds Raquel Dadomo, Wheatsville’s brand manager. For an extra sweet peach, she looks for sun-kissed marks and a deep rosy color.

APPLES
Apples can be tricky. “There have been times I cut open an apple that looked perfectly fine on the outside, but it was an older apple that was kind of mealy on the inside,” Valerio says. Since apples vary by season and region, he recommends asking a produce worker where they’re from. During the summer, you’ll want apples from the US crop, while winter is peak season for South American apples. Bruising is the telltale sign of a bad apple, so look for the most crisp of the crop. Many stores will let you taste-test the apples if you ask.

MANGOES
A ripe, ready-to eat mango should feel a bit soft to the touch. “A lot of folks see a mango that’s soft and they shy away from it,” Valerio says. “But usually those are the sweetest ones.” Hard mangoes can take 3–5 days to ripen and may not ripen properly. If you do need to ripen one, put it in a plastic or paper bag to accelerate the process.

TOMATOES
Selecting tomatoes primarily comes down to purpose and preference. Firm tomatoes are perfect for topping a burger. But if you’re looking to make a sauce or salsa, a softer tomato might be ideal. Either way, pick one that doesn’t have wounds and isn’t leaking. Bigger isn’t necessarily better—Valerio has tasted some smaller tomatoes that packed more flavor than their larger counterparts.

PINEAPPLE
When picking a pineapple, go for the gold. Inspect the sides: if they’re a golden hue, rather than green, they’ve been picked at the proper time. Then give it a sniff. Often pineapples will be bruised in transit, causing them to develop soft spots, then mold. If it smells like fresh pineapple, it will taste fresh too.

AVOCADOS
To find a ready-to-eat avocado, feel the skin around the stem. “If it has a good amount of give to it, not very hard but not too soft, that’s one that’s good to eat right away.” A hard one will take 2–3 days to ripen. To keep a ripe avocado longer, store it in the fridge for a week. Once it’s cut, you can also refrigerate it in a container with a red onion so it remains fresher longer.

BERRIES
All you need to do for berries is to look at them. But look closely. The top culprit is mold that develops from the condensation inside the containers, Valerio says. He doesn’t mind if you open up the container to get a good look from all sides, as long as you don’t touch them. Since berries break down quickly, he won’t buy berries unless he’ll eat them within two days. If you want them to last longer, transfer to a bag and freeze.

Flow Chart to Finding Your Way to Om