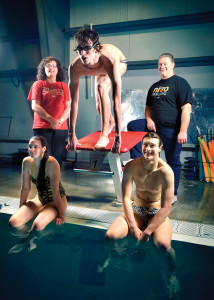 Purpose-driven training can enhance performance
Whether it is the start of a sprint or rapid changes of direction for simply moving at a rapid pace to increase your workload, acceleration contributes to success. As we look forward to improving performance at the AFM FITTEST event in June, you can work on training in the gym or on your own at home with acceleration exercises. While these movements may not exactly mimic the specific competition skills, they will enhance the quality and efficiency of movement so that you can perform your best on test day.

Here are four examples that can be applied for purpose-driven training movements.

There are different aspects of acceleration: sprinting straight ahead from a static start position, as in the 40-yard dash; performing an explosive movement, such as the broad jump; and quickly completing the turns for the pattern on the agility test. Here are examples of movements that can better prepare the body to perform these skills and, therefore, help you reach your personal best.

Power Step-Up on Box
Purpose: Focus on grooving the movement pattern of triple extension (ankle, knee, and hip extension) on each leg independently for dynamic motor control and force production.
Start with one foot on a box, with weight shifted forward and shoulders positioned directly over the edge of the box. The rear leg is in line with the torso and the ball of the foot is in contact with the ground.

Tweak Down: Lower the box height to a shorter step and keep box flat at all times for better balance and stability.
Tweak Up: Come up onto the ball of the foot while maintaining balance and control in order to increase the explosiveness of the step-up.
Advanced Tweak: Add a weighted vest that is 5-10 percent of your body weight to externally load (but not interfere with) the movement quality.

Power Squat to Press (Thruster)
Purpose: Focus on the lower body load and explode maneuver through to express power in full extension of the body.

Tweak Down: Use body weight only to perform the movement.
Tweak Up: Perform the exercise on a single leg.

Split Jump with an Arc
Purpose: Expressing power to accelerate and decelerate (land under control) in a split stance position while applying the challenge of a light load in the frontal plane, which forces resistance to any unwanted lateral motion that could take away from forward motion.

Tweak Down: Perform a split jump without the medicine ball.
Tweak Up: Increase the speed and height of the jump only as far as quality movement and landing with balance can be maintained.

Skaters with Reach
Purpose: Assisting power endurance and lateral motion, which can aid in changes in direction, by perform lateral bounding, loading more of your body weight over the single foot base of support and then quickly accelerating laterally onto the opposite foot.

Tweak Down: Perform the skaters without a reach, focusing on stable landings with a pause for balance and control.
Tweak Up: Increase the distance and speed of the skaters with reach while maintaining control of landings.

Using different movement patterns to improve your strength and conditioning as well as movement quality will translate to better athletic performances. Start working now in order to make the 2013 AFM FITTEST competition a better experience and a true measurement of your personal best.  These four exercises are just a few examples of movements that target different aspects of preparing the body to accelerate for certain skills.  Please seek a fitness professional or one of the many training groups preparing for the competition if you would like help with these and more training applications.  Move better!

Eating on the Road