Yogi may be 7-years-old, but he still has the energy of a puppy. He’s always up for getting down and dirty in the mud, fetching tennis balls and taking a dip in the lake. This is all after his daily 5-mile run.

Like most labs, he is a lover of the outdoors, enjoys fishing trout in the Guadalupe river and meeting friends on his hikes through the green belt. In his down time, he enjoys basking in the sun while chewing on a large stick from his mom’s firewood pile.

Once on death row at the San Marcos Animal Shelter, Indy was rescued two years ago by her now parents and quickly displayed her natural athletic abilities. She loves to run for miles at a time, all while conquering every boulder or hill she may face. She also has built herself a reputation around Auditorium Shores and Zilker Park for making circles looking for someone to run alongside. Indy uses her natural herding instincts to teach puppies not to stray from their parents.
She also knows the importance of stretching; Indy always makes sure to start her mornings and end her naps with a nice downward and upward dog stretch. 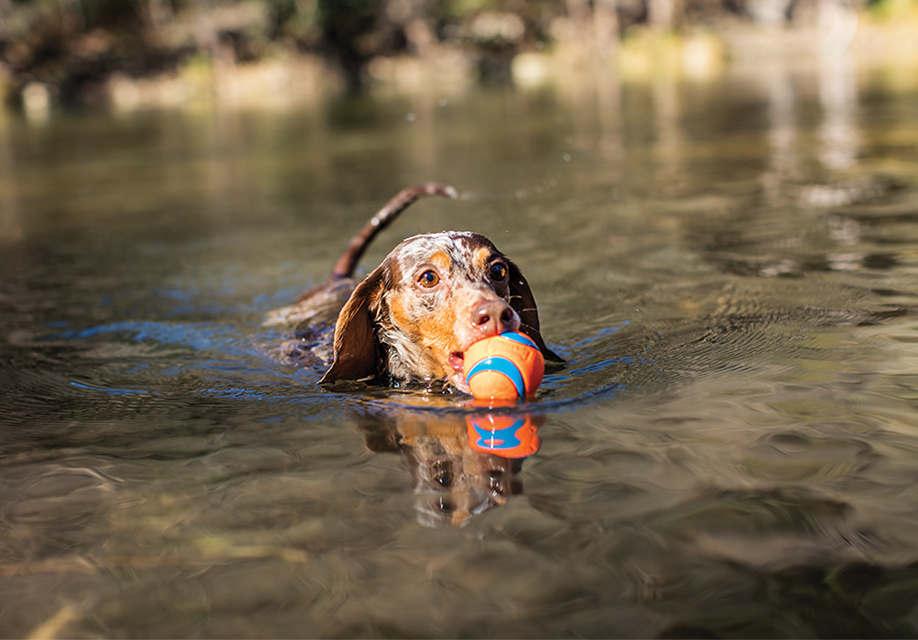 Jerry is a small, but mighty, little lady and is the epitome of an underdog story. Suffering from intervertebral disc disease twice, Jerry was rendered paralyzed in her back two legs. After having two corrective surgeries, Jerry is fully mobile and stronger than ever — and has even completed a 5K since her surgeries.

Her favorite activities include fetching and digging for hours. She also placed second in a dachshund swimming competition and regularly drops her favorite ball into creeks just so she can jump after it.

If she is not walking directly beside her owner, Di Borejsza, people question Goose’s whereabouts. She goes everywhere with her mom — backpacking and camping trips, hitting the greenbelt every weekend and tagging along with her to work at Knockout Kickboxing studio.
She can 360 jump, weave in and out of legs, chase deep Frisbee throws and swim. Goose may appear a bit “big boned” but this lady shows fitness comes in all shapes and sizes.

Zelly is the decathlete of dogs. She competes in nearly every sport — agility, barn hunt, obedience, bitework, dock diving and lure coursing. She’s even competed in three dock diving nationals, including her most recent in Orlando, Florida.
Zelly also loves to hike and explore central Texas with her parents. She’s always happy and playful. On top of all that, she is currently training to be a search and rescue dog. 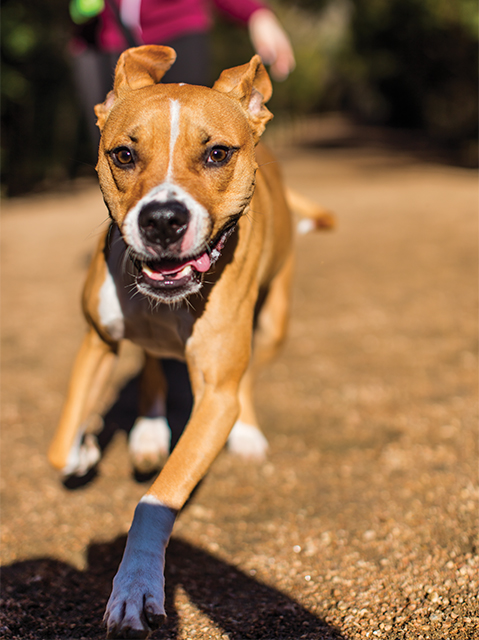 Harvey was dropped off at a local police station in a box with four of his brothers and sisters, all with Coccidia. After being administered an IV and taken into foster care, Harvey is now happy, healthy, energetic and playful.
Harvey loves healthy foods, especially bananas. He loves sprinting, Frisbee and knows how to sit pretty. If you want to know how he is thinking or feeling, just look to his gravity-defying ears —  which are always on a swivel.

A born and raised Austinite, Junior sticks to his inherited traits as a labrador — sweet and gentle, but full of energy and playful. He always has wide eyes and a smile on his face.

Junior is a trained hunting dog and loves to go out with his dad. He loves retrieving dove and duck, whether real or just a toy. He also loves swimming, hiking at Turkey Creek Trail, his twice daily walks and playing with his brother, Rusty.

Dixie Lou is not your average 80-pound puppy. Not only do her different colored eyes stand out, but she is a dog of many talents.

Dixie Lou loves to see how many treats she can catch in a row. She holds a current record of 49, but is working on breaking 50. When she’s not training or catching treats in her mouth, she loves to play fetch and practice her second language, English. She can say “I love you” and regularly lets her people and even strangers know.

Benson is a rescue dog who tore his ACL when he was hit by a car. Now fully recovered from his injuries, Benson is as sweet and soft as he is active.

He loves going to the dog park and running around his backyard at high speeds. Benson is also a great running companion. He loves to hunt and chase squirrels in his free time — especially the neighborhood squirrel, Carl.

Being an eight-time AKC title holder, Katie is always on the go. She competes nationally and is typically busy training for several of the many dog events she competes in. She is also a trained hunting dog.

Katie also might look familiar as she has been involved with many print and television ads. But despite the elite resume, Katie is still well-rounded. She is friendly and loves life, and her owners hope to use her as a therapy dog after she retires.

Nica is the Trail Roots running group mascot. She loves joining on their Saturday morning runs and knows who to run with in order to get in her 10 miles. When Nica is not running with the Trail Roots group, she runs with her mom and brother on the road two to three times a week.

She also likes to travel and explore new places. She has run in the mountains of Lake Tahoe, California; Santa Fe, New Mexico; Buena Vista, Colorado; and Boone, North Carolina — as well as other Trail Roots expedition trips. She also enjoys laying on the beach, river rafting and canoeing.

Stella was found running down Kingsbury road by Pease Park. After making sure she wasn’t chipped or didn’t belong to anyone, she was officially adopted by her new owners.

Since then, she has been paddleboarding, running and playing in every amazing place a dog would love in Austin. When she’s not moving around and playing, Stella loves to curl up and snuggle.

Yoga in the Age of the Alpha Male