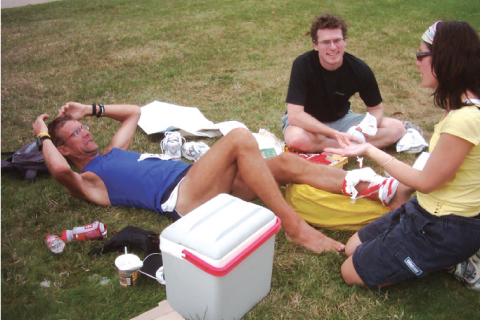 How runners find rewards (and risks) in stage racing

Austin is a great running city. I have lived and trained here for ten years, run all of the big races (and many of the smaller ones, too), and now share my time between here and London where I grew up. I have served as race director for the venerable Decker Challenge, worked for a while as a coach for Rogue Running, and spent a couple of years as Austin Runners Club president. But during my “Austin decade,” the races I enjoyed competing in most weren’t actually in Austin at all but took place five thousand miles away, in Europe. Starting in 2003, I ran in and completed seven big European stage races across France, Germany, Ireland, and—the granddaddy of them all—across the whole continent, nearly 3,000 miles, from Italy to Norway.

What are these races like? Well, just think Groundhog Day, the Bill Murray movie about a TV reporter who finds himself repeating the same wretched day over and over again. A monotonous daily cycle repeats itself for weeks on end, without interruption: wake at 4 a.m., breakfast at 5 a.m., start running at 6 a.m., run all day (anywhere from 30 to 60 miles), shower and nap, eat dinner at 7 p.m., then bed down again at 8 p.m. Sleep is a communal affair, with nearly one hundred of your newest “best friends” sharing a hard wooden floor in a noisy, grubby school gym or sports center. Hygiene generally ranges from Spartan to squalid. Food intake is high on calories but low on deliciousness.

So what’s the attraction, you ask, and how did you get started on this stuff? Well, for me, it all began when I read a newspaper article about the 1992 Trans American footrace, which happened to pass through the New Jersey town where we were living at the time. I made the fatal mistake of buying a book about that race. (Now might be a good time for a shameless plug for my book, Running Across Countries, available on amazon.com.) The more I read, the more I was inspired, intrigued—mesmerized, almost—by the physical, mental, and logistical feat of traversing a continent on foot. How is such a thing even possible? I was absolutely certain that I would never be able to achieve such an implausibly difficult undertaking. But when I found a “shorter” race (a mere 18 days and 800 miles across France), I thought, well, just maybe I could give this a try. How hard could it be?

Well, I soon discovered that running 300-mile weeks without rest days is very hard. No, that’s an understatement. It’s a long way beyond very hard; it’s brutally, soul-destroyingly hard. Everyone gets injured and everyone gets sick, without exception. The human body is not designed to run 40 miles a day for weeks on end. It quickly starts to break down, and minor issues can soon morph into really major, life-threatening ones.

Most runners (depending on their biomechanics) develop either Achilles tendon inflammation or shin splints early in these races, especially if (like me) they start out too fast during the first week. The traditional cure for athletic injury is rest, which is not possible during a stage race. The only option is to suck up the pain and keep on going. However, the miracle of the human body I discovered is what I now refer to as “dynamic healing.” After several days of running with pain and inflammation, injuries slowly recede and forward progress resumes. I have personally witnessed runners hobbling pathetically with major joint swelling one day and then seen them running again fluidly three days later. I’ve experienced this phenomenon myself twice, during my first French race and two years later, halfway across Germany. Not fun, for sure, but definitely miraculous.

Seemingly trivial conditions, such as blisters and chest infections, can become very serious during these long races. Take blisters, for example: There’s soreness and tenderness at first but, with continued maltreatment combined with an immune system weakened by fatigue, they can soon turn into active and nasty wound sites where staph infections like MRSA or bacterial infections (necrotizing fasciitis) can take hold. I know one Taiwanese runner who very nearly died at the end of a stage race across France. Her infected blisters and nonsteroidal anti-inflammatory drug (NSAID) intake nearly killed her. What started as blisters ended up as gangrene, and she ended up losing one leg and the other foot to life-threatening infection.

So what kind of crazy people take part in these races? Germans, Japanese, French, and Scandinavians form the majority of the competitors. About 20 percent are women. You can count the number of Americans who enter them on the fingers of one hand. The average age is about forty-five, but the winners are usually in their late-twenties or early-thirties. To take part, there are a few basic qualification criteria: Can you run further than a marathon on several consecutive days? Can you deal with pain, fatigue, traffic, endless stretches of road shoulder, and ill-health without complaining too much? Do you have lots of time and money to invest in an activity with absolutely no financial return? Do you enjoy mingling with runners whose languages you don’t understand in countries very unlike the good ol’ U.S. of A.? If you answer “yes” to each of those questions, then I say unreservedly —go for it! It will be a life experience I promise you will never forget.

The majority of ultra stage runners lie somewhere on the mental health continuum between normal and pretty odd, but you quickly find that there is an outlying ten percent of the population who are absolutely barking mad. During one race, a couple of friends who were crewing for me at the time played a fun dinnertime game, which involved ranking the five craziest competitors in the race. Choosing a winner was a tough call: Was it the French guy who talked to himself and recorded every statistic imaginable about the race (including kilometers run per shoe), the Czech guy who always peed while running down the middle of the street to save valuable seconds, the elderly German lady who completely undressed in the middle of the gym after each stage before hitting the showers, or the Brazilian who was constantly bandaging one part of his body or another? It was indeed a pretty strange bunch.

But while the crazies run along in the peleton or bring up the rear, the race leaders are focused on the task at hand and are tremendous athletes. My German friend Rainer Koch, now in his 30s and as delightful a person as you will ever know, has never been beaten in an ultra stage race, including Trans Europe 2009 and Trans America 2011. His average marathon pace is a modest 3:30. Not too impressive, you may say…until you remember that he’s doing that twice a day, back-to-back, and then repeating every day for more than nine weeks. And he’s not the only star. At least ten of the 40 finishers in my Trans Europe race had the potential to challenge Rainer for the win.

These races are definitely not for the faint-of-heart. And for most competitors, they are not, in fact, really races. They are very difficult journeys into the unknown, even for the finest runners who take part. It’s better to think of ultra stage racing as a series of problem-solving exercises in survival, with the odds stacked heavily against each runner. So if your idea of a good time is spending weeks on end sleeping on uncomfortable gym floors, dealing with questionable hygiene, blisters and injuries, and suffering through all the best and worst that the weather and traffic has to offer, then I definitely urge you to consider a European stage race. And if you do decide to take part, you will certainly regret your decision deeply as you suffer through day after Groundhog-like day, so don’t say I didn’t warn you. But I assure you that the lifelong memories, friendships, and sense of achievement you gather along the way make it all worthwhile in that rose-colored rearview mirror of your life.

My first recommendation is always the same: try the Tahoe Triple. It's a marathon a day for three days around the perimeter of Lake Tahoe on the California/Nevada border. It's low-key but very well organized, the scenery is superb, and the weather is usually great. As an added bonus, you get to achieve rock star status on Day 3 of the event, as you get to run the stage wearing a special "Tripler" shirt accompanied by two thousand other "mere mortal" Tahoe Marathon runners. Three days is a manageable proposition for anyone who has run a few (preferably hilly) marathons. It's a great test for a stage race novice to see whether further and longer is a realistic possibility.

Google is your friend, as is the Marathon & Beyond page on Facebook. In the US, there are still relatively few multi-day stage races, although I believe they will develop and be embraced by folks who tire of completing massive 50- and 100-milers. They are an adventure and a journey, not just a one-day “suffer fest.” Because they require such superhuman efforts from their race directors and crews, events come and go, so you can't assume that, should you decide to do a particular race the following year, that race will actually happen. Until now, Europe has been the richest pickings for stage races. A great event that takes place every year (but be warned: it’s always oversubscribed and does fill up quickly) is the Baltic Run, which covers the 200 miles from Berlin to the Baltic Sea coast in five days. This is a good step up before taking on more extreme (trans-country and then transcontinental) challenges. My advice is always to look for established races; first year events can often be difficult for their organizers, and runners become guinea pigs who serve to smooth out logistical kinks for their successors.

Most races in Europe cost about $100 per day, which covers food, accommodation, race fee, and other goodies like T-shirts and awards (in the US, races are much more expensive). This represents good value and helps offset the cost of your transatlantic round trip flight. Each day your luggage is transported to the finish of the stage, so all you need to think about are eating, sleeping, and running. Don't over pack, but do invest in the most expensive self-inflating air mattress you can afford. Don't worry about language issues in Europe; most Europeans know enough English to help you get by. Do, however, expect things to be a little different. Just be friendly and sociable, and you'll be warmly embraced.

If you do decide to go for it, prepare well but don't over train. Start the race very slowly—MUCH slower than you think you should—and have fun. Be a tortoise, and you will overtake many hares after the first few days of over-enthusiasm on the part of your competition. Keep telling yourself that you have a long distance to cover, and the most important thing to do is to avoid injury. A wiser and more experienced German runner once told me mid-race: "When you get home, no-one will ask you which place you finished; they will only want to know that you completed the distance." Sound advice.