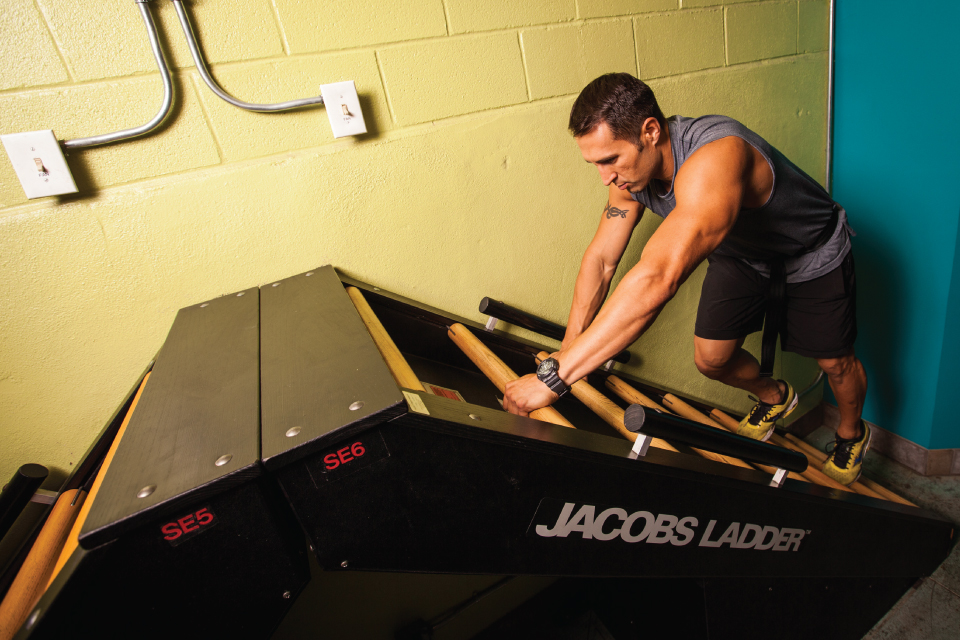 I ’m always on the lookout for new and creative workouts, so when AFM asked me to test out some equipment, I jumped (or in this case, climbed, lunged, and pushed) at the chance. After thoroughly testing Jacob’s Ladder, the PRX7, and the BodyJac, I hope these reviews will help readers in their own fitness programs.

Positioned at a 45-degree angle, this ladder offers a low-impact and intense cardio workout with a high return in cardiovascular improvement. With benefits similar to a climbing version of a Stepmill, climbers can expect little to no stress on the lower back and joints while also being in full control of the machine’s speed. Through the tension placed on the cable connected to the user’s waist belt and the bottom of the machine, climbers can pick up speed by moving to the top of the machine and can slow down by easing back to the lower end.

Even as a personal trainer, I found the machine’s size somewhat intimidating when I first approached it. Amid visions of Jillian Michaels yelling at me to “get out of my gym!” and warnings from friends about the intensity of this workout, I climbed on and buckled up anyway. To get a good understanding of the machine, I tried a couple of variations. On the first attempt, I wore a 30-pound vest for a higher level of challenge and, for another variation, I went vest free for an easier run—or so I thought. I found out quickly that no matter what approach I took with Jacob and his infamous ladder, I was going to come away feeling absolutely spent. And, sure enough, by the end of the test, both my lower and upper body were tired and fatigued.
If you’re looking for a challenging cardio workout without stress on your joints, this piece of equipment is definitely a viable option. Since the climber determines the speed, it is fairly safe for fitness novices while still being able to provide the elite athlete with quality interval and threshold training. Focus is imperative due to the hand–eye coordination required to climb and, because of this, I would recommend that people who haven’t begun a workout program first start with a stationary bike, elliptical, or treadmill before jumping on Jacob’s Ladder. 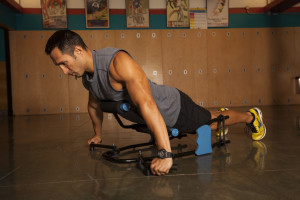 The BodyJac is an assistive push-up device that promises outstanding results with one core movement: “the push-up.” Although I do believe that the push-up is one of the better all-around upper body and core strengthening exercises, I went into this demo with a bit of apprehension as to how the creator “Cactus Jack,” who introduced his invention on the show Shark Tank, guarantees an all-around workout with this device.

Formatted to counter your body weight with the assistance of two resistance bands attached to the rear of the frame, the purpose seems to ride on how many extra push-ups you can squeeze out with that added help. It comes with a repetition tracker that keeps up with your push-up count during the workout, and it can time your sets or rest periods if you are going the interval-training route. I assembled the BodyJac in a little less than ten minutes, timing myself to validate my manliness (I will admit that the frame is already about 80 percent assembled before taking it out of the box…but I digress). I gave this contraption a go and must say I was not very impressed at the level of difficulty and did not feel very challenged. I did, however, quickly consider that this could be an effective tool for someone starting a workout program and looking to gradually progress his or her upper body strength. However, there are also other alternatives, which I'll get into shortly.

It was not a very comfortable position for me during my trial run because I felt as though my shoulder region was engaging more than my chest area. The handles do shift some; I tried to place them in the best position for my chest to take over as the primary muscle group, but had a bit of trouble with doing so. I am not sure that the machine was designed to accommodate a large variety of body types. I tried a few other exercises, such as crunches and tricep push-ups, and felt more discomfort with body positioning then I did from actual muscle activity.

In a nutshell, I would strongly recommend using other methods to assist in improving push-ups before shelling out cash for this Cactus Jack invention. Try starting out with push-ups on your knees until you develop enough strength to progress to your toes. After having worked in the fitness arena for nearly ten years now, I have established a couple of common threads for success when establishing a workout program: variety and combinations that suit your specific needs and limitations. These are something to keep in mind when looking for an easy fix, which is what infomercial devices such as the BodyJac like to bank on. Again, I feel the BodyJac is emphasizing a very important exercise, so I'll give it credit for that. However, I know as well as any other rationally thinking person that one exercise will not have you looking like a Greek god. My advice is to establish a well-rounded modified fitness program to progress you gradually and to stay away from the quick fix before you jack your body up and take up more space in your garage.

Cons:
Does not have a wide range of exercise capability
Not very comfortable
Promises unrealistic expectations 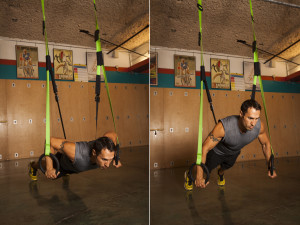 The Primal 7 Performance System, known as the PRX7, uses Olympic ring handles in a regressive assistance/suspension system and is based on seven foundational movements, including the squat, push-up, pull-up, great morning bend, twist, run, and the lunge. The PRX7 can be especially useful to those involved in weight loss programs or injury rehabilitation and is a great option for fitness enthusiasts of all levels. Developed by an Austin-based company, this system, when incorporated with a sturdy structure such as a parallel beam or pull-up bar, can more easily enable proper form and support than can other suspension systems.

Right off the bat, I had a tough time securing and adjusting the straps on the beam, which I haven’t experienced with other suspension training systems that use carabineers but, with a bit of help, I was able to figure it out and begin my workout. I performed the seven primal movements as advertised and found that the system offered an almost effortless start. The flat resistance belt helped me progress quickly, and, when I needed less help, I switched to the lighter resistance band and noticed an increased challenge immediately. I ran into some brief problems finding balance and stability during the more difficult plyometric and explosive movements, but I adjusted to a slower rate to get comfortable before increasing my speed again.

After working through the seven primal movements extensively, I believe the PRX7 can benefit a wide range of benefits for people looking to begin a new fitness program. In a time where form and movement patterns are often overlooked by gym enthusiasts, PRX7 users are able to gain a great understanding of both very quickly. Overall, I feel PRX7 is a high-quality fitness tool that emphasizes the importance of form for foundational exercises, allowing users the opportunity to heighten their fitness experience with less pain and injury over time.

AFM would like to thank Castle Hill Fitness (castlehillfitness.com) for the use of the Jacob's Ladder and PRX7 system and BodyJac (buybodyjac.com) for supplying their product.