After a hard day’s work, Nik Hubbert loads up his bike, loads up his cooler, says goodbye to his dog and heads down to Festival Beach Park in Austin.

Hubbert is one of many Austinites gathering at the park for the infamous Thursday Night Social Ride or, as regulars know it, the “TNSR,” hosted by Social Cycling ATX.

Social Cycling ATX is a cycling organization that hosts weekly events for cyclists of all skill levels to increase awareness and participation in and around the Austin cycling community.

The group prides itself on the diversity of its riders — everyone and every bike is welcome. 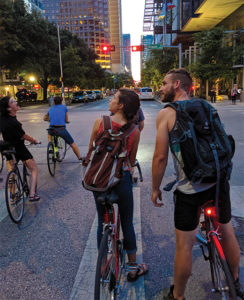 Hubbert has been participating in the rides since he first moved to central Texas for college back in 2012. He and his friends would commute to Austin from San Marcos every Thursday.

“It’s such a great atmosphere. It really embraces that ‘Keep Austin Weird’ vibe, and it’s a great way to meet people,” Hubbert says.

nt types of personalities, which are expressed through each of their bikes — from bike messengers, doctors, lawyers, college students, tourists and more.

On any given ride, you might see road bikes and mountain bikes outfitted with the latest innovations in cycling technology worth thousands of dollars, to unicycles, BMX bikes and Frankenstein garage builds.

Often, the weekday rides go into the night, and riders will outfit their bikes and themselves with colorful lights and bells. Some riders take it a step further and add speakers to their setup to jam throughout the ride.

Pedestrians are often taken back by the large amount of riders passing all at once and will stop to take pictures and videos.

The Thursday Night Social Ride usually has around 250 participants every week with its record attendance being around 350.

“I’ve been riding with the group for almost three years, and it’s gotten pretty huge since way back when,” says Donnis “Wheels” Hughes, a Social Cycling ATX rider.

The ride is a casually paced cruise and typically covers around 12-15 miles. Each of them is led by a designated ride leader. From South Congress to the streets of East Austin, the routes change on a weekly basis, simultaneously making it a great way to see different parts — especially for those who are new to the city.

The rides start at Festival Beach Park at 7:30 p.m., and cyclists of all different skill levels, riding styles and backgrounds meet up to socialize at the park before the ride actually starts. The rides stop at one of Austin’s many city parks as a halfway point, where riders catch their breath, grab a drink and socialize some more. Then, the ride will end at a local bar or restaurant where riders gather for drinks and food.

“The halfway point is where all the fun happens,” Hubbert says. “From races to tricks competitions — It’s like a party on wheels!”

Want to keep the fun going?

The group offers other rides as well.
Check out these other Social Cycling ATX gatherings.

Monday Partnering with the Texas School for the Blind and Visually Impaired, riders will take blind and visually impaired students on a social ride with a tandem bicycle, giving the students an experience many of us take for granted.

Tuesday Yoga ride. A bike ride that ends with a free, hour-long yoga class led by instructors who donate their time to build a healthier and happier cycling community through the transmission of yoga.

Wednesday Heavy Breather Ride, for those who enjoy a more fast-paced ride (average speed of 14mph). The route is always 25 miles. This ride tends to attract a smaller group and is a great opportunity to get to know other riders, and it’s great for those looking for a more intense cycling workout.

Saturday Caffeine Cruise. This ride meets and begins at a local coffee shop and stops at several places for food, drinks and swimming (in the summer, of course). The ride also stops along farmers’ markets, swap meets, parades and other Austin locations. The pace is social, and the group size is small. It’s a great ride for beginners and for meeting people.

Sunday Sunday Cruise. The second most popular ride, the Sunday Cruise is a great way to spend a Sunday afternoon in the warmer months. The ride holds a casual pace and stops frequently at parks, coffee shops and other events.

All Social Cycling ATX events are free to join. It’s a great way to see the city, make new friends and get some exercise on your bike. With the warmer months here to stay, why not gather some friends and family and check out a ride!

For more information on the rides, start times and other events that the group hosts, check them out on their
social media.