Feel the Rhythm of Movement 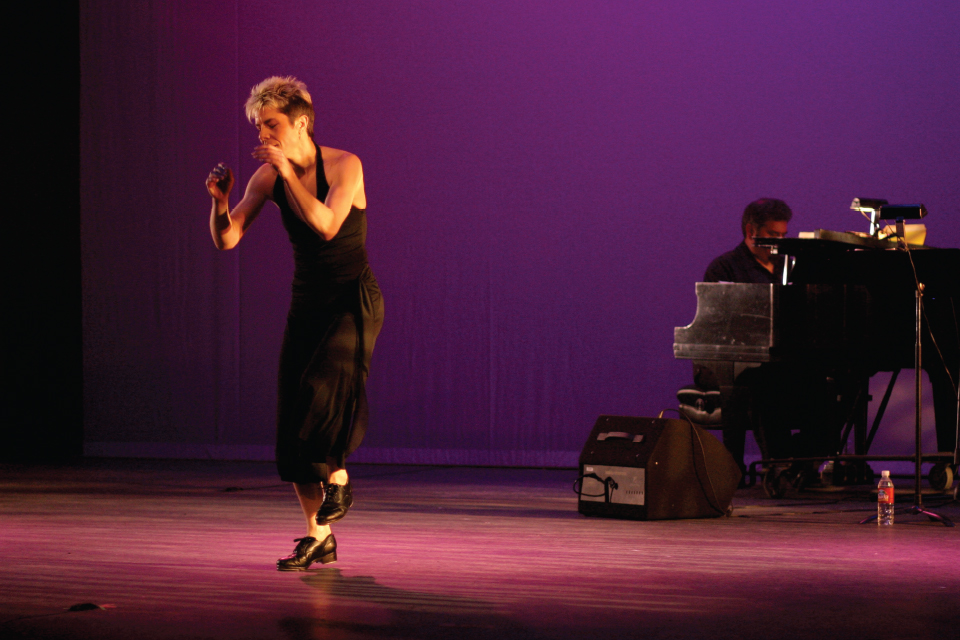 Acia Gray, the co-founder and producing artistic director of the Tapestry Dance Company, first showed talent when she was only 6 years old. She would go with her stepfather to his gigs around Houston. She said she was first the cute kid who could play the tambourine, then the cute kid who could sing. Then she became the kid who would constantly drum beats on the back seat of their Ford van. Her stepdad got the message.

“There was one evening when we were leaving the club, and I got in the back [of the van], and there was this big, red sparkle drumset, and I had just seen that drumset on stage. Evidently they bought the drumset for me,” said Gray.

After immersing herself in the world of drumming, Gray found tap dancing when she was in college. She graduated from the American Academy of Dramatic Arts in New York City with a degree in advanced acting technique. In 1983, she came to Austin for a vacation and was prompted to audition for a tap dance company called Austin on Tap.

“On a whim, for whatever reason, it sounded like something I wanted to get into for a while, because it was just calling me, for lack of a better explanation,” said Gray. She made the cut, and started with the company.

Gray toured the United States with Austin on Tap until 1989, when she was one of 15 individuals chosen for a creative residency for tap dance. During her residency, she learned that tap dance is both sound and movement, rather than just sound. When she came back to Austin, she co-founded Tapestry Dance Company with Deirdre Strand, a fellow tap dancer by way of ballet and jazz. Tapestry now has seven salaried dancers who come from all over the world, including Canada and the United Kingdom, and Gray also teaches classes for all levels of students. The lessons in tap can carry over to other parts of life.

“My whole philosophy of the actual dancing part of tap is that it’s your body that’s moving your feet around, making the sounds. So you don’t think about your ankles and your feet. You think about your body, and the feet are creating the music,” Gray said.

Gray said the hardest thing to teach in tap is to relax and listen. She explained that dancers have to trust their ear, their musicality, and learn how to fall. And those who think they might be musically challenged might be in for a surprise. To learn how to tap, all that is needed are ones body, tap shoes, and the willingness to listen.

“It’s not only good exercise. It’s good balance; it’s good for relaxation in many ways—trying to get out of your head and trust yourself,” said Gray. “I tease that it’s almost like therapy, because of the lessons in tap: know where your butt is, let go, stop thinking so much, get out of your head, and make a mistake.”

During her career, Gray has had all kinds of injuries. She’s torn her hamstring, and sprained her ankles. She has lingering knee pain, which she combats with acupuncture. But for a year and a half, Gray faced a new challenge that made her craft almost impossible. She was diagnosed with ulcerative colitis, an immune deficiency disorder. Her colon was removed, and she got sick from all the medication after the procedure. Gray only returned to full-time work in January 2013, but is excited for everything happening at Tapestry.

“To bring in hungry dancers who want to learn, who want to explore the craft and play, and they’re not in it to show off their speed or tricks, they really want to find their voice in the craft and the creativity of the artform, that excites me,” said Gray.

What Does it Take to Tap?

Per Gray's instructions, the author showed up with her body, tap shoes, and a willingness to listen. Here's what Gray taught her in a span of one hour.

Balance. In order to make the right sounds and land the right way, you have to keep good balance. Bringing your belly button into your spine helps and makes you more aware of just how much you slouch all day.

Use your legs. In fact, you might find your legs sore the next morning. Since you spend most of your time tapping on the balls of your feet, your calves might feel tight.

Know where your butt is, “because your butt might be in trouble,” according to Gray. Your glutes move your legs, which move your feet, which make the sounds. Remembering where your body is moving helps you land better, in turn making your steps a little easier to complete.

Trust your musicality. You might think you have the least rhythm in the world. But once you start tap, you might find that all those perfectly paced long runs have actually given you some rhythm. Trust your ear, and trust your body. You might find you’re way more musically inclined than you thought possible.

Make mistakes. Don’t be afraid to mess up a step. And don’t be a perfectionist. Sure, singles and doubles are easy to nail down, but triples and shuffles can be confusing. Keep practicing, and don’t worry if it’s not right the first time. Just like riding in clip shoes takes practice, so does dancing in tap shoes.