Austin Fit > Articles > AFM > Volleyball: Taking a Few Skills from the Sand to the Gym

Volleyball: Taking a Few Skills from the Sand to the Gym

With summer officially in the past and school back in session, it’s a safe assumption that for most kids, sand volleyball season is over. While these kids are probably missing the sand and casual atmosphere, they should notice an improvement in their indoor game after their sand volleyball season. Most of the time, it is very easy for kids to make the transition from the sand to the hard court. While the speed of the indoor game takes some adjusting to, the kids will notice that their overall skill level as well as fitness will be improved after a long grueling sand season in the Texas heat. If executed correctly, there are a few specific skills that kids can take from the sand to the gym that will lead to lots of success for the individual and help their team. 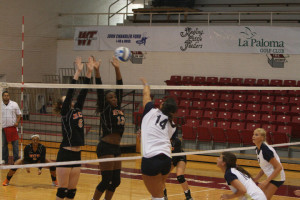 In sand volleyball, shot making is such a crucial element to the offense of a player. High line shots over a block into the corner, hitting short just over the blocker, or cutting the ball right across the net are all shots that can be used in the indoor game. While there is obviously a smaller area for each defender to cover, there are always holes in defensive patterns. Having the ability to hit shots and find those holes will earn players a few more kills a game. Defensive schemes often change throughout a match, so it is important to also have the ability to see the court and know when the holes in the defense are changing.

The next skill that can easily transfer from the sand to the hard court to help a kid’s indoor game is out of system transition setting. Out of system transition setting is when the pass is not put for the setter to run multiple hitters. At the middle school and high school level, very few kids have the ability to track the ball and put a good set up for an attacker. The sand volleyball game gives kids more opportunity to practice the skill, and, as a result, sand volleyball players are often better at it than those who only play indoor. The skill is more natural, since sand volleyball players are taught to move their feet behind the ball and bump set, facing exactly where they want the ball to go, leaving little room for error in the delivery of the set.

One of the most monotonous skills to work on—but one that has the highest return—is transitioning off the net from a blocker to an attacker. This skill correlates closely with pulling off the net in sand volleyball. The footwork is very similar, and, after doing it all summer in the sand, it is so much easier on the court. While it is not exactly the same, in my own personal experience, I was a better player when I thought of it as pulling off the net instead of transiting from a blocker to an attacker.

The last skill that will help a kid’s individual indoor game is reading what outcomes are possible given the situation. Essentially, after lots of sand volleyball experience, a player’s volleyball IQ goes up. Sand volleyball is so much about reading and recognition that players will often find they are more prepared mentally for indoor games and are aware of what decisions are best for themselves and what outcomes are possible from their opponents.

While it’s sad that summer has come to an end, there are attributes of sand volleyball that kids can work on and take with them to the indoor game to help their team be more successful. Some skills involve the ball, such as shot making and out of system transition setting; some do not; and some are just plain mental. One thing is for sure, they are both just a game with a ball and net, and anybody playing is lucky!