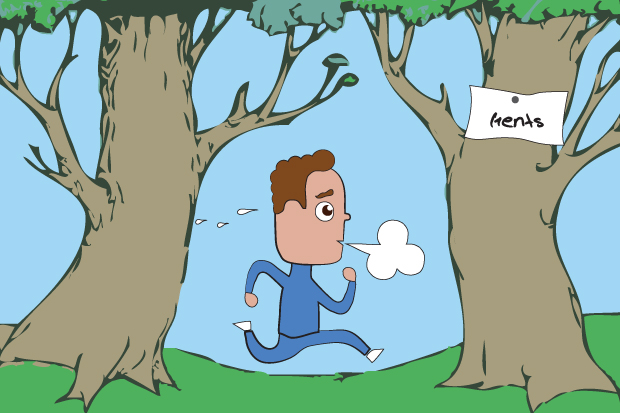 There's a news story that has recently gone viral about a female runner who was captured on film pooping in someone's yard…more than once! Like any normal suburban-dwelling, Whole Foods-eating fitness addict, my first reaction was, “That's freaking disgusting, lady! Show some dignity.” My second reaction was, “Oh bloody hell. I hope it wasn't me.” I was on a girl's trip in Aspen a while ago and decided to go out for a trail run by myself. When I returned to the condo, I sheepishly admitted to my friends that, “I guess a bear isn't the only thing that sh*ts in the woods.” Men like to think that girls have sweaty pillow fights when we're on our chick sabbaticals. Ha. Let's face it: Running, cycling, and practically any other aerobic activity really does get you moving. For better or worse. I hate going to the bathroom in public restrooms, but apparently public spaces aren't a problem in an emergency.

Public spaces definitely weren't a problem for my friend during this year's Memorial Hermann Ironman Texas. At mile 80 of the bike ride, she got a flat tire, which is pretty much every racer's worst nightmare—or so she thought. She also had to pee really bad. Lady Luck was sort of on her side because a race support vehicle pulled up and offered to help her change the tire. Graciously, she accepted and grabbed a PayDay bar to eat while she waited. You know what else she did? She peed her pants. On purpose. She did it right there on the side of the road while eating her PayDay, watching someone change her tire, and seeing cyclists whiz by (pun intended). Why would she do that? “Because I had to go,” she said. Well, rest assured, I won't be hitting House Wine with her anytime soon; Lord knows what may happen.

I had another girlfriend who sat on a curb and totally peed herself just minutes after setting a personal best of 3:18 at the 2006 Boston Marathon. She went from being on top of the world to completely losing it. “I didn't even realize it was happening,” she recalled. “I was just so tired and spent and I didn't care.” I'm pretty sure that this does not happen after a huge pitch to a new client at an advertising agency. (At least, I hope it doesn't.)

I absolutely love the raw spirit and nature that evolve on group training days and in races that makes conversations and situations like these totally acceptable. There's a line in the 2008 movie, Spirit of the Marathon, that goes something like this: “When you're out with your running friends, all you talk about is running. When you're actually running with them, you talk about everything BUT running.” So true. We talk about life, work, relationships, travel, and, of course, going to the bathroom. Can you imagine walking into Dell on a Monday morning and fist-bumping your cubicle partner because you just knocked out a great deuce followed by an awesome run? In the athletic world, that's totally what we do; in the real world, not so much. There was a time when the pace of my Saturday long runs was often dictated by whether my running buddy had his PRP…his Pre-Run Poop. If he hadn't, I knew there would be a mandatory five-minute break at some point during the run.

Sometimes you don't even need to make it an official break. During a race, you can't stop the clock. I paced another male friend during a nighttime trail run and graciously turned off my headlamp and flashlight when he told me he had to go right there. I didn't even blink an eye. I gave the man his privacy, even though “privacy” meant being out in the middle of a trail. By the way, this only works at 3 a.m. when you're 80 miles into a 100 miler. This does not work on a first date.

There are so many stories and visuals of things we have done or witnessed that would shock anyone's grandma straight to the ER. There's always the obligatory line of guys at Mile 1 of any marathon hovering around any tree or bush they can find. Usually, it's less discreet than that. It makes me mad and insanely jealous at the same time. In fact, I'm surprised my husband still married me after some of the things he has witnessed. I was actually talking to him about this article while my hands were halfway down my cycling shorts applying a product called Hoo Haa Ride Glide.

I actually feel bad for the female runner who was busted on camera taking care of her business. We've all been there at one desperate time or another. We've all stood at the start line of a crowded race or in the middle of the trail saying, “Please just let me make it home.” Clearly, she wasn't seeking attention or checking in on Facebook to brag about it. She's probably a loving wife, doting mother, and power investment banker in real life that makes million-dollar deposits all day. Unfortunately, though, this particular deposit was captured on film. 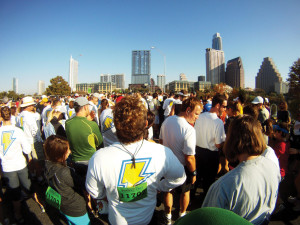 It's Time To Fluff Up Your Feathers!
This month, I'm kicking off a three-month training plan for the 23rd Annual ThunderCloud Subs Turkey Trot taking place on Thursday, November 28, 2013. This five-mile run through the streets of Austin is one of the largest in the state and a huge annual fundraiser for Caritas of Austin, a local charity that provides services and resources for the poor and needy of Central Texas. In fact, last year, over 21,000 runners participated, and ThunderCloud Subs donated over $325,000. In addition to the five-mile course, there's also a one-mile race as well as the Stepping Stone School Kid's K.

This "family friendly" plan is perfect for any beginner or family who wants to build mileage slowly for the five miler and enjoy all of the sights and sounds this race offers. You may even want to dress in costume like so many others to show off your festive mood! It's a three-month plan, so you'll be more than prepared for the race AND your post-run Thanksgiving Day meal!