Meet a few Austinites who have found their rhythm not only in the music industry, but also in fitness. It can be a tough set of passions to balance, but these musicians have found their callings.

Drew Davis made her way to Austin after college to start her career in marketing. Although she had always been drawn to music, it had never seemed like a plausible career path — that is, until she arrived in Austin.

“Because there are so many places that want live music, Austin creates this welcoming, collaborative atmosphere for musicians instead of a competitive one,” Davis says. “It’s something really unique to Austin.”

Davis started picking up gigs all over town. In 2014, she took a year off from work to tour around the country, living out of her Toyota Corolla. Once back in Austin and working in marketing again, she started to find her nine-to-five work days a little dull.

Luckily, that’s when a yoga studio asked her to take over their marketing. The job would give her the freedom to continue her music while paying the bills. There, Davis had to take all of their classes and figure out the studio’s marketing strategy and what other classes to offer.

Having spent every day at the studio, either in class or listening from outside, it was a no-brainer to get certified to lead classes herself. Within four days of completing her certification, she was leading a class — and rocking it.

“My experience with music made a lot of aspects easier for me than for the other instructors,” Davis says. “Things like setting the right music, counting beats and keeping the flow of the experience full of energy.”

As for music, she has all sorts of things going on. Pre-COVID-19, she was playing every night of the week all over town, either playing her own, original music or playing with the cover bands Matchmaker Band and PDA Band. She’s had songs featured in all kinds of TV shows, and she even writes and stars in some of Toyota’s digital commercials.

Ormide Armstrong started playing the trumpet when he was 11 years old. His older cousin would give him lessons every Saturday morning.

“I chose the trumpet because I thought it was cool that someone famous — Louis Armstrong — played the trumpet,” Armstrong says.

From then on, he continued to hone his skills as a jazz musician throughout middle and high school. He has since performed at Cancun Jazz Festival, Urban Music Festival, Austin Area Jazz Festival and even Super Bowl XLVII festivities in New Orleans, LA.

“My favorite thing about playing music is creating and recreating,” Armstrong says. “Knowing and feeling that I’m actually producing sounds that affect my emotions and those of others is invigorating.”

Teaching has always come natural to him. Even when he was 8 years old on the soccer field, he could be found helping his teammates with their footwork. So, it made sense that he found his way to Reagan High School to be its director of bands. Now, he’s the leader of the Boss Street Brass Band, The Empire and OB2 while also finding time to be the director of bands at Decker Middle School Fine Arts Academy in Manor, Texas.

For a long time, he had been inspired by local legend Desiree Ficker to compete in triathlons, testing himself physically and mentally. But when he moved schools and his schedule became cluttered, fitness began to fall through the cracks. It wasn’t until 2016 that he decided it was time for a lasting change.

It was then that Armstrong took up Bikram yoga, inspired by Austin’s own Monica LeBansky’s story. He has since ended Bikram but continues to practice on his own each day. Last year, while he was performing on a cruise ship, he could be found leading the crew members through sun salutations by the pool. Armstrong says he’s even seen the benefits change his stage presence. 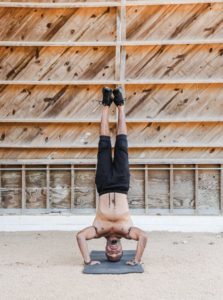 “When Boss Street performs, it’s a very high energy group, so it’s good to have the lungs to put on a show,” Armstrong says. “With my yoga background now, working out definitely helps with my lung capacity and to blow more and control my air flow while playing the trumpet.”

Now that he’s back in Central Texas, he’s been setting up a meditation room and home gym to use during the pandemic. As his gigs come back with Austin slowly re-opening, Armstrong says he’s excited to see what lies ahead.

Russell Warren Mayes may have started his careers of music and climbing in Nashville, Tennessee, but it didn’t take long for him to find his way back to his home state and favorite city: Austin, Texas.

He moved to Tennessee when he was 22 with hopes of his music career finally taking off. Instead, what he found was a love for rock climbing and more reasons he belonged in Austin rather than Nashville. When his climbing mentor moved to Austin, it took only about a year before he followed.

“That long-haired, wild kid did not fit into the marketable stereotypes of Nashville,” Mayes says.

Once in Austin, he was surprised to find that there was an abundance of not only music opportunities but climbing routes as well. Since he had instructed in Nashville, he started working with Austin Rock Gym to earn some money and keep climbing. He used his experiences on the stage to create his own engaging style of instructing.

“I learned to teach in an entertaining way,” Mayes explains. “One that relinquishes anxiety yet carries the messages and skills in ways that are effective and, importantly, unforgettable.”

In 2009, he quit instructing to focus on his growing family and music. He continued climbing with some of the most prolific climbers, even being featured on the cover of Jim Hogge’s Austin Climbing Book in 2012 but was injured shortly after.

Then, in 2015, a friend gave him a call. Adam Mitchell had bought Rock-About Climbing Adventures and wanted Mayes to work for him. Having grown out of shape and focused on his event band, Tone, he was reluctant.

“That one gig, that one dude lit the fire again,” Mayes says. “I’ve been guiding and instructing for him, passionately, ever since.”

Katerina Papacostas, a Broadway star, moved to Austin to start a new home. After years of living in New York City, she found that the cut-throat environment was weighing on her ability to explore her own art.

“I was most excited for the food, the music and the people,” Papacostas says. “Austin is a great place to be able to approach my art from another perspective and really learn new things about my own artistic style.”

Papacostas grew up performing and even studied music at NYU. She has since been in productions like Broadway’s “Tootsie,“ held lead understudies and lead roles and even worked alongside Julie Andrews. It was during the production of “Evita” that a fellow cast member mentioned barre class instruction. Papacostas quickly felt drawn to barre and its ability to tone without bulking — the kind of fitness most performers prefer.

“Theater and fitness just go so hand in hand,” Papacostas says. “No matter if you’re a dancer or performer — it’s a big part of it all.”

Since almost every artist needs some kind of supplemental income between shows, Papacostas decided that working as a barre instructor would be the perfect complement to theatre.

“Having a background in theatre really drew me to the group classes,” Papacostas says. “Everyone in sync and letting the music move them, it’s a lot like a show.”

Fitness instruction made its way into each aspect of her life. Even when she was in engineering school, she led mid-day movements for those stuck at their desks. Now, she’s excited for more opportunities once Austin fully opens back up.

Until then, she’ll stick to her plan of slow integration into the community while continuing to write a musical with her husband and teaching engineering classes and free group workouts.

Workout of the Month with Austin Rowing Club