For an athlete, one injury can completely change the trajectory of his or her life. Jeremy Hills is a prime example of that.

During his senior year, Hills broke his leg while playing football for the University of Texas. He saw his plans of playing football professionally begin to fade. But thankfully, Hills’ connection with football didn’t end there.

Fast forward to 2019 — with a few twists along the way and a lot of hard work. Rather than playing professionally, Hills trains some of the top NFL athletes each summer at his NFL Elite Training Camps in Austin. These camps have hosted many notable names in the NFL, including Earl Thomas, Quandre Diggs and Kenny Vaccaro — all former Texas Longhorns. 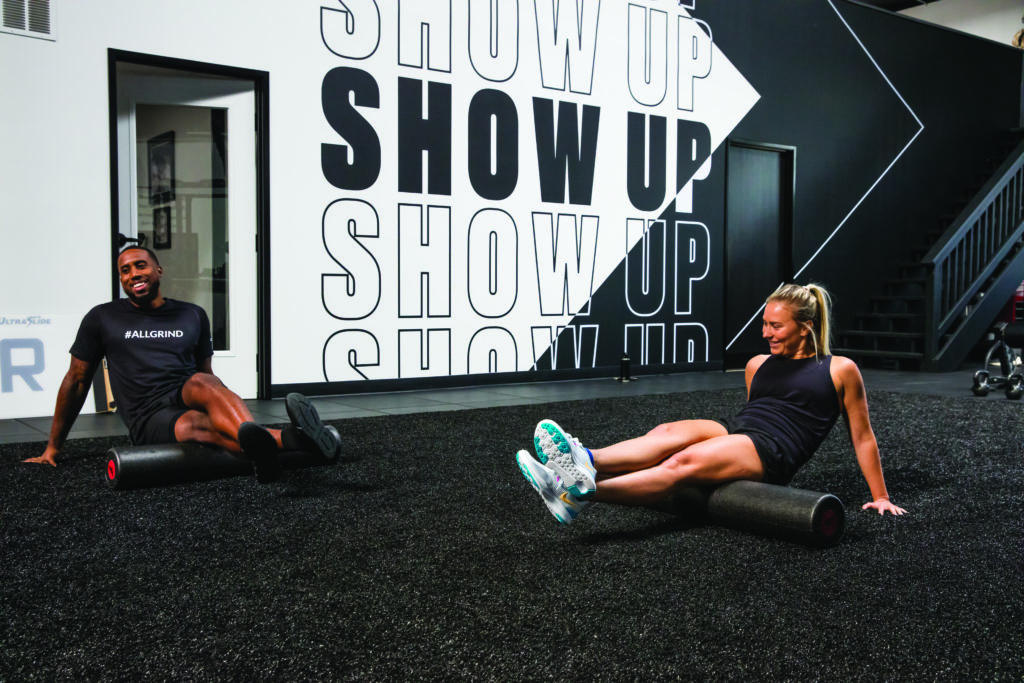 I caught up with Hills at Ladder headquarters in Austin this August to chat about his training camps. As we continued our conversation and I tried to better understand what training for pro athletes looks like, I realized the only way I could fully understand would be to experience an NFL-catered workout for myself.

The Workout
About a week after our conversation, I joined Hills again at Ladder for our mock NFL training session. The first thing he said was, “Friends don’t let friends skip leg day.”

I told him I was nervous, but Hills reassured me I had nothing to be nervous about. And so we began.

Just as he has his athletes do before every session, we started with foam rolling, focusing on the posterior chain. This helps get the muscles warm and helps relieve any tightness. Hills instructed me through each foam rolling move, starting with the calves, then working all the way around the legs and hips and up to the shoulders. He says with foam rolling, as soon as you find the spot where it hurts, start digging into that.

After foam rolling, Hills had me do a mix of static stretching and dynamic stretching. Again, these movements focused on the posterior chain. We started with more static movements, stretching out the hamstrings and back, then moved into more dynamic movements like leg swings, moving butt kickers and high knees up and down the turf. At this point, I was starting to sweat and could feel my heart rate speeding up.

Now it was time for the real work.

Round one started on the runner treadmill. I began at a jog and increased my speed up to a sprint every five seconds for 25 seconds. Then, I went straight into the next two exercises: eight ball slams and then 10 box jumps. We did this twice through.

Round two was sled pulls down the turf with sled pushes on the way back. Next, it was 10 alternating high knees while suspended on the TRX straps. I had three sets of each.

For round three, I had 10 hex bar squats with 50 pounds and then one leg lunges, 10 on each side. Twice through each.

For the final part of the workout, abs — or as Hills says, “core and you’re out the door.” After being given a couple options, I opted for doing 20 toe touches, 20 alternating leg v-ups and then 20 russian twists with alternating legs, all with no rest in between. All of these also included a 10-pound med ball.

Takeaways
Obviously, this workout was shorter than what a typical workout would be for his NFL athletes, and I didn’t move through the exercises as quickly as he would expect from them.

But all in all, even a shorter, slower-paced version was not easy. This workout was tough.

By the end, I was out of breath and sweating. I was sore for several days after and my quads burned while trying to walk up and down the stairs. My entire back was also feeling it.

Workout of the Month: Athletic Outcomes