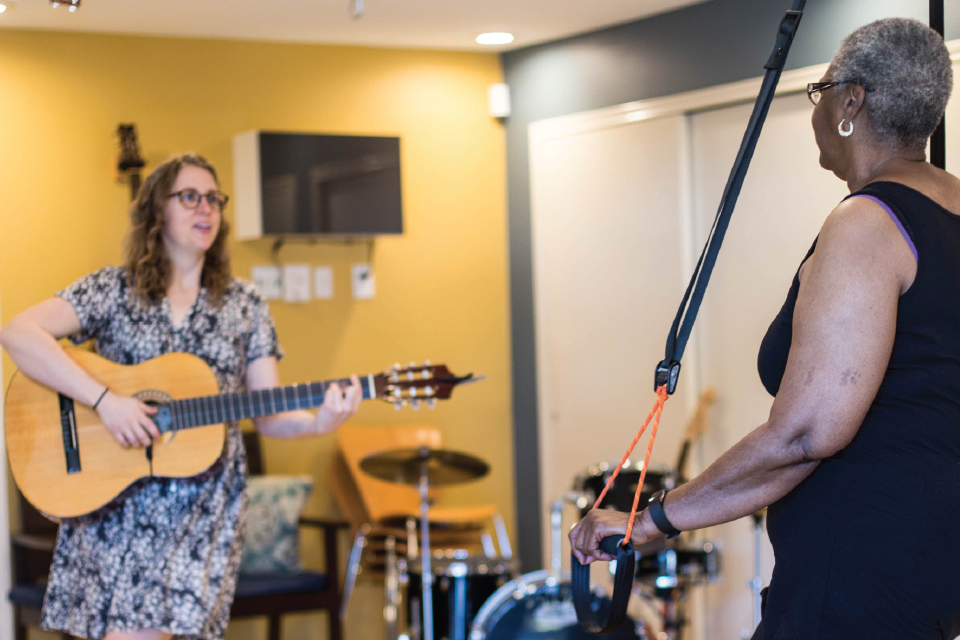 Hope Young didn’t have a lot of stability around her growing up. Her mom, while loving and dedicated, struggled with bipolar disorder and depression. With few services available to aid mental illnesses at the time, they were left at the mercy of the disorder’s erratic peaks and valleys throughout the years.

By the time she was a teenager, Young had lived in 16 places—most of them spread across Indiana. But amidst the chaos and uncertainty of her childhood, she had one steadying force by her side. “When you grow up and your mom’s asking you for help—the kind you can’t give as a child—you need something to stabilize you. For me, that was music,” she says, her long salt-and-pepper hair bobbing as she speaks. “It helped me reach and connect with my mom even at her lowest points.”

We’re sitting in a small, square room that was probably a high school band practice room in another life. There’s a guitar in the corner and a piano along the wall across from me. As someone whose musical career ended after a brief, squeaky stint with the viola in the 6th grade, I’d typically feel a little out of place. But with Young, there’s no time to feel self-conscious or uncomfortable. Her enthusiasm is infectious.

At 18, Young enrolled in classes at Ball State University in Muncie, Indiana. She planned to double major in music and education, determined to build on the love of both her mother had instilled in her. It didn’t take that long for her mettle to be tested. As a freshman, she beat out thousands of her peers in an audition for the big homecoming musical. Immediately after, she was pressured by professors and advisors to focus solely on her performance career. It was her first exposure to the rigidity of the musical world, but it wouldn’t be the last. “I had no interest in pursuing a conventional music career or casting my goals aside,” she says, a tinge of frustration in her voice. “I started with a vision and a dream—and that vision came out of a need. I wasn’t backing down.”

This is the theme of Young’s life: She’s always had to break through the silos society’s forced her into. But whether it was breaking the barriers of communication as a child, rejecting the social stigmas associated with her mother’s mental illness, or rebuffing the thought of high art as the sole purpose of music, she never gave into adversity. She brought that tenacity to Austin in the late 1980s when she started a music therapy internship. She was enamored by the potential to use melody and singing to treat neurological maladies like developmental delays and Parkinson’s disease. Soon after completing her program, Young fulfilled her dream of starting her own center. Finally, after years of fighting for respect, she could put her life experience to use.

“Through neural rehabilitation, we’re addressing a lot of things that were once considered irreversible and untreatable. We’re giving people hope.”

Over the years, Young has made a name for herself in the international music therapy community for her passion and innovative practices. She’s treated clients with every neurological ailment imaginable, from adults recovering from strokes to children with autism, cerebral palsy, and other developmental disabilities. As she grew, so did her profession. “More than ever before, the medical community realizes how powerful music can be in activating the brain,” she says. “Through neural rehabilitation, we’re addressing a lot of things that were once considered irreversible and untreatable. We’re giving people hope.”

Even in its most elementary forms, music plays a key role in our daily mental abilities. It can dictate our moods, enable self-expression, and even impact our energy levels. That’s why we listen to it when we workout, after all: It sends a desired signal to our brain, which in turn sends a signal to our body. The medical community recognized this years ago, which is why every major hospital—Dell Children’s and St. David’s in Austin, for example—has a music therapist on-staff. Unfortunately, they are rare commodities, which can limit patient accessibility to services, Young says. That’s why she’s looking to shake things up. “We’re working hard on developing a solution where, using IT and technology, we can provide our services and treatments remotely,” she says. “We’re especially excited about the potential wearable technologies we have. The the demand is out there—it’s just a matter of consistently reaching those larger audiences in need.”

Think about it. So many people wear Fitbits and have apps on their phones to track their movements, measure their heart rate, and evaluate their sleep quality. Diabetes services have also made serious progress over the past several years in measuring and accounting for blood sugar spikes and changes in heart rate. This proves Young’s point: The capability to monitor health remotely is there. It’s just a matter of putting it into practice.

That’s where the Movement Tracks Program comes in. The heart of Young’s plans, this program’s sole purpose is to create original musical pieces to help people walk again. It works like this: subjects walk across a runway with sensors measuring their muscle activation, gait, response time, and other movement indicators. As they move, the Movement Tracks team plays music to gauge how each person’s body reacts to different rhythms, beats, and sounds while collecting heaps of data. As the project’s Lead Composer, Cassie Shankman is responsible for coming up with each original piece—a process she’s no stranger to after years of classical training, performances, and deejaying. “The children’s piece is a lot slower and a lot of the instruments mimic animal sounds. You’ve got the trombone to sound like an elephant, but it also stimulates the kids to move and swing their arms,” she illustrates. “But for our adult subjects, these are people who once could walk and are trying to regain that ability. So I wrote up a jazz piece with a faster, up-tempo feel that makes you want to dance.”

The program’s only in its second round of trials, but the results have been impressive so far. And thanks to Young’s leadership and its team of composers, engineers, and therapists, the Movement Tracks Program is on the fast track to becoming a reality. “We’re getting closer and closer to achieving the capability to jump in and send someone a corrective sensory signal to help them stabilize if they’re issues,” Young exclaims.

“So if you’re walking around and your sensor detects a notable change in your gait or balance, it’ll open your phone’s Movement Tracks app to a prescribed playlist to stabilize you.”

This could have the power to shape daily healthy and performance athletics, too. In fact, Young is already exploring how this technology could be used to enhance workouts, improve recovery, and foster better sleep habits. If that happens, it’ll be a hit with professional athletes and everyday people alike. We all could use a boost in our exercise regimen or sleep schedule, after all. But Young and Shankman aren’t concerned with commercial glamour or marketing potential right now. They’ve got deeper motives driving them.

“So many musicians think studying music therapy is a waste of your career and your talent,” Shankman says. “But it’s anything but. This is the best project I’ve ever gotten to work on—it’s directly impacting people’s lives for the better.”

As we walk to the door, we exchange thank yous and goodbyes. I smile at Young, marveling at how far she’s come since she was an Indiana kid hell-bent on changing the world with music. “Through this center’s 28 years and a life of needing music, I know just how powerful it can be,” she says. “It saved me, it saved my mom. I’m alive because of it, and it’s time to pay it forward.”

Mission accomplished, Hope. We can’t wait to see where your next steps lead to.