A Challenge for Change 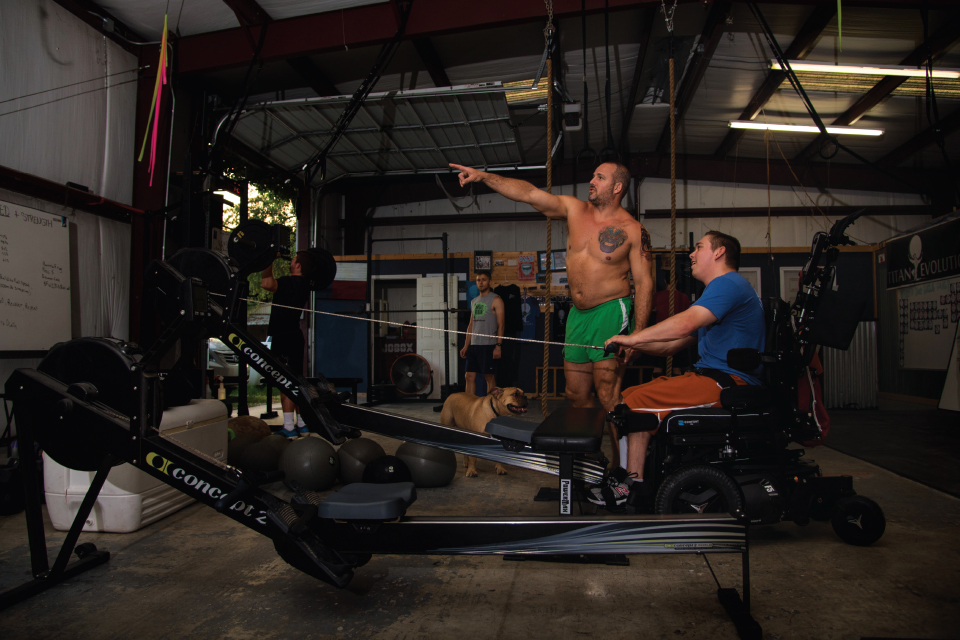 Archer Hadley is finding a way to grow stronger with unconventional methods and the support of the Austin fitness community.

The relationship between a trainer and trainee can be many things. For some, it’s a love-hate relationship. For others, a dreaded encounter. But for Archer Hadley and his trainer, Kevin Edwards, it’s a friendship that inspires.

Archer Hadley is a freshman at The University of Texas at Austin, and just like his peers, he’s adjusting to life away from home, making friends, and juggling the workload of a hectic class schedule. For Hadley, though, there’s an added challenge; he maneuvers his way around campus in a wheelchair, the result of a childhood diagnosis of cerebral palsy.

During his senior year at Austin High School, Hadley had trouble opening manual doors, and was often stuck outside. To make a change, Archer set out on a mission to raise money for three handicap-accessible doors at his school. Surpassing all expectations, Hadley and his classmates raised $87,000—enough money for five door installations.

For a small donation, school members challenged others to spend the day in a wheelchair and experience the challenges Hadley faced. The challenge not only raised awareness but also “put people in awkward situations, and took them out of their comfort zone,” a feeling Hadley says is essential for making a change.

Hadley’s determination led to the challenge’s success, and almost one year later, he brings that drive to Titan Evolution Fitness.

“I don’t believe when people say, ‘I can’t do that [workout]’ because they can.” – Kevin Edwards

Hadley’s mother, Barbara, began training at Titan Evolution Fitness at the start of summer, sometimes bringing Archer along. At first, he cheered on other workout-goers. Now, he is the recipient of their cheers.

“Archer was so excited [when Kevin invited him to workout],” Barbara said. “We had visited countless gyms, but no one felt they could train him.” Kevin Edwards didn’t see it that way.

As the owner of Titan Evolution, Edwards urges gym-goers to try something new every day. He reminds them, “everyone is equal when starting a new workout,” and that everyone starts from somewhere—including Hadley.

“I don’t believe when people say, ‘I can’t do that [workout]’ because they can,” Kevin said. “They just have to figure out to what degree they can—that’s how I approach things with Archer.”

Edwards’s method trains Hadley for everyday life, making adjustments to meet him at his physical abilities.

The rowing machine—an exercise Hadley enjoys—is a prime example of Edwards’s creativity. By lifting the front of the machine and setting it on an elevated surface, Edwards eliminates the challenge the moving seat creates. The new angle allows Hadley to remain in his wheelchair while working his upper body strength.

A weighted pull exercise is another reliable workout. With one end of the rope in Hadley’s hand, the other end tied to a weighted plate, Edwards sets the plate a few feet away. Pulling a weight towards your body may seem simple, but it’s also helped Hadley build strength and improve his posture.

“I feel very encouraged [by Kevin],” Hadley said. “He’s someone that pushes me to do better and be physically stronger. He inspires me to work harder.”

“We had visited countless gyms, but no one felt they could train him.” – Barbara Hadley

The Titan Wheelchair Challenge was born from the pair’s successes in the gym. The duo is organizing a special workout to show participants that anyone can do anything. Last year’s inaugural event put people in an awkward position. This event hopes to task participants in a similar way, as they will have to complete a series of workouts in a wheelchair, just as Hadley does on a daily basis.

Now that Hadley has graduated from high school, his namesake event is also making a transition of its own. Oct. 10 through the 15 will kick off a city-wide Archer’s Challenge to raise proceeds that will benefit the Rosedale School, enabling a new addition of accessible doors and a wheelchair-accessible playground.

Through his workouts, Hadley’s agility, mobility, and overall well-being have improved. It’s also boosted his confidence.

“I’m all about inspiring people and prompting them to do better in the community,” Hadley said. And according to the people who know him, he is doing just that.

Whether he’s raising awareness about Archer’s Challenge or crushing previous times on the rowing machine, Hadley’s enthusiasm for life continues to motivate everyone around him—especially his trainer.

For this duo, though, it’s clear the inspiration flows both ways.