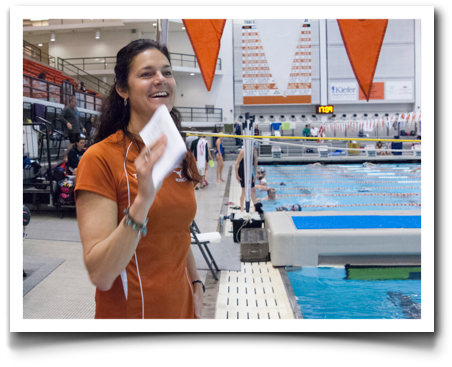 Ask any masters swimmer from Longhorn Aquatics to name the single best aspect of our program, and the first thing they will tell you is how lucky we are to be coached by Whitney Hedgepeth.

Hedgepath is a two-time Olympic swimmer (Seoul ’88 and Atlanta ’96—where she won gold and silver medals) and, since 2005, she has been the head U.S. Masters Swimming (USMS) coach at Longhorn Aquatics (TXLA).  Under her leadership, TXLA has become the largest and most successful USMS program in central Texas. The team trains on the U.T. Austin campus at the Jamail Texas Swimming Center and has over 200 members whose ages range from 18 to over 70!

This September, USMS recognized Hedgepeth as the 2013 U.S. Masters Swimming Coach of the Year. The award recognizes her achievements as a coach not only by the success of her swimmers in the water, but also by the depth and breadth of her other contributions to the sport of swimming, including publications in magazines (such as Swimmer and Austin Fit).

A partial team photo from a typical Saturday practice

In her past eight years at the helm, her TXLA swimmers have collectively achieved 66 USMS All-American honors and ten USMS All-Star honors (versus only ten All-American honors in the prior 16 years).  TXLA relay teams also hold over 20 USMS national relay records and over ten FINA world records! This past summer in Mission Viejo at the U.S. Masters National Championships, TXLA members won seven national titles and one relay. While fielding only ten swimmers, TXLA placed 15th out of 137 teams.

Professional triathletes Kelly Williamson, Pat Evoe, and Chris McDonald train with the TXLA team. Why? Hedgepath’s challenging and demanding workouts prepare these triathletes for the intense competition, with the goal of coming out of the water in top position. Pat Evoe has said that training with Whitney has taken 12 minutes off his 2.1-mile swim time.

This past summer, Katy Dooley was only the 69th person in the world to complete the Triple Crown of Open Water Swimming (successfully swimming the English Channel, Catalina Channel, and Manhattan Island Marathon swim).  Katy credits Whitney for preparing her to swim these demanding events.

Whitney possesses the unique ability to relate with every member of her team.  Whether you are a fitness swimmer, competitive swimmer, pro- or amateur triathlete, or an open water long distance swimmer, the practices and workouts are tailored to accommodate all levels of participants. Team member Beth Plevich recently commented on what makes Whitney unique: “Whitney cares for each team member on a personal level.  She is always asking about our lives, careers, and family. She goes out of her way to make each team member feel appreciated.”

Whitney is a highly sought-after speaker and writer in Austin, as well as nationally.  In addition to writing articles, Whitney has spoken at numerous schools, churches, USA Swimming events, and other organizations.  Her talks weave a message of goal setting, overcoming failure, how to lead a balanced life, and what swimming has brought to her life as a wife, mother, and coach.

If you are interested in trying out a masters swim team to improve your health, fitness, and swimming ability, Longhorn Aquatics offers 11 weekly workouts on various times and days.

Editor’s note: Be sure to read Whitney Hedgepath’s contributions to AFM by clicking here.