Doubling Your Distance the Safe Way 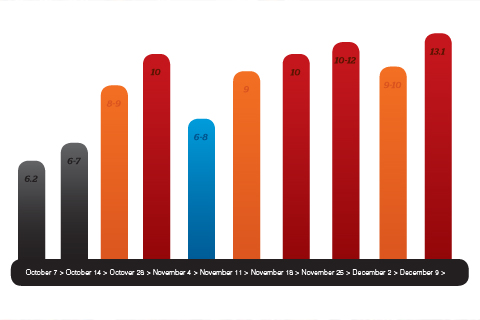 If you’re participating in the Austin Fit Magazine Distance Challenge (AFMDC), you’re already geared up for the first race on October 7, the IBM Uptown Classic 10K. New AFMDC runners have prepared by doing some distance, perhaps by running a 5K or 10K here and there in advance; for many, that 10K distance may be their longest run to date. Looking ahead, those same new runners will need to up their distance by another four miles to get ready for the October 28 Run for the Water 10 Miler. And they must then continue to increase that distance in order to complete the Decker Challenge Half Marathon on December 9. That means that, over the course of nine weeks, new runners will be doubling their distance…while racing.

Perhaps you’ve heard the old axiom that runners should not increase their distance by more than ten percent a week. But where does that rule come from? It seems that this is one of those “facts” that has been passed along without any particular research to back its claim. It’s a lot like that “drink eight to ten glasses of water a day” guideline that people seem to accept but it’s unclear where the idea originated, as there are no studies which specifically support the claim.

Supposedly, runners who increase their distance each week by only ten percent can safely avoid injury. If we follow that guideline, then our new 10K runner who starts out with that 6.2 maximum distance on October 7 (week one) won’t get to 13.1 by race day on week nine.

It always helps to consult the greats, and coach Jack Daniels, Ph.D., is a running great (no relation to the Jack Daniels you may be sipping in celebration of your AFMDC finish). In Daniels’ Running Formula, the coach talks about determining weekly mileage. Now, it’s important to look at ALL your running, not just what you’re doing for your long run—so those who roll off the couch and bust out a long run on the weekend without doing any other weekday runs are setting themselves up for real trouble. Runners should have at least two weekly runs to go along with that long run. Daniels advises sticking with a set amount of total mileage (that’s all runs for the week, added together) for three weeks before bumping up to a new distance. If we follow that advice, then our new runner would need to hold the weekly distance s/he ran for week one for two more weeks. So there would be an increase in week four and again in week seven. This makes for an interesting progression, in that the Run for the Water 10 Miler falls on the next mileage increase. Perfect!

That progression allows our new runner to work his/her schedule so that the 10 miler is the next natural step. However, there’s something else to consider—this is a new distance in a long series of races designed to test the runner’s ability to finish the entire sequence. It’s important, therefore, to approach that 10-mile race as a new long run distance and part of the training schedule as opposed to a goal race for a fast time (note: runners who are experienced and have more mileage under their belts will approach events differently than someone who is covering these distances for the first time).

Much of the good work that goes on in a runner’s body occurs during rest; that’s when muscles repair and strengthen. Running wears the body down so, in order to see improvements, it’s necessary to get enough sleep and allow for rest and recovery in workouts. Many runners like to use a “down” week in their schedules, which often translates to a build for two weeks with a fallback to a lesser distance in the third week. However, the race calendar for the AFMDC forces modifications to even the best thought-out schedules. It’s important to look at the time between races and optimize schedules, as runners must build enough distance to get comfortably to the start line of the next race while not piling on too much distance too fast so that injuries occur in the process.

With those factors in mind, here’s what a weekly long run schedule might look like for a new runner taking on the AFMDC:

*A range allows you to pick the mileage that works best for your body and how you’re feeling that week—just keep within the range.

Both the Run for the Water and the Decker Challenge are hilly, challenging courses at a significant distance. It’s so important that new runners hit those two events healthy and prepared, as these races can make—or break—the rest of the AFMDC season.