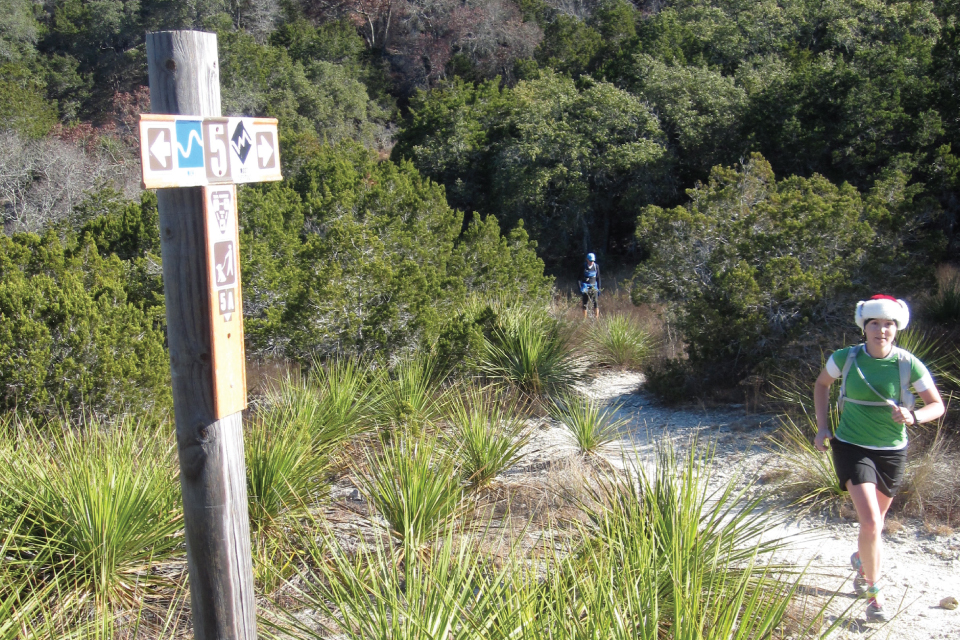 Cactus Rose 100-mile trail race was created because more than a few Bandera 100K (62 miles) veterans started pushing me to add the 100-mile distance to that January event. Because Bandera is such a successful trail race, I was reluctant to add a longer distance and diminish the status of the 100K. Montrail had come in as a sponsor and promoter for the Montrail Ultra Cup and then the USA 100K Trail National Championships joined in, so I felt it would be foolish to minimize either competition with another distance. Still, people kept pushing me, so I knew the interest was high for a 100-mile race in the beautiful and rugged Hill Country State Natural Area (HCSNA).

There were many issues to resolve, so I started going through the mental processes to see how a 100 miler would happen. I knew it would have to be a completely new and separate event in the same park that did not piggyback on top of Bandera, and it would have to stand on its own merits.

My company, Tejas Trails, was already stressing our volunteers to their limits with the all-night format at the Bandera 100K, so I knew that getting them out again for another all-nighter would be asking a lot. I gave some thought to a “self-serve” race aimed at veteran runners, a race with almost no volunteers and a format not much different than a couple of buddies out doing a long run. This would be a supported race with every amenity—except people to hand out food and water at the aid stations.

The idea was to utilize a minimalist concept such that we created a full-blown station every five miles on the course, with tents, tables, water, and ice, with an option for runners to put their own stuff (clothes, food, crew—whatever they liked) at each location. Truth is, most veteran runners don't want much help besides water and ice. While this sort of format would not suit many new-to-the-trail runners, it would be a nice throwback to the old school racing where little was asked or expected, and if you wanted something on a course, you brought it.

This race format would be just as much work for the race director. I’d still have to mark the course and take everything down when it was done. I’d still have to set up aid station tents, put medical support in place, arrange for timing and data collection, hold packet pickup, dispose of trash, and secure insurance, port-o-cans, park reservations, campsite and lodge rentals, shirts, awards, medals, and so on. And I’d still have to haul it all there and bring it all back home afterwards. But it would be a different format from the other 100-mile races in the United States, and I thought that could be appealing to trail runners.

The next question became the course. I knew the trails well because we’d been running the Bandera race out in the HCSNA, so I had a variety of trails to put together for a route. Because Cactus Rose would be a self-serve race, I knew it would have a much smaller field that was a lot thinner, meaning there would be long gaps between runners, especially in the later stages of the race…a race that would last 36 hours. So I figured it would be safer if the runners could see one other at regular intervals. That way, they could keep tabs on each other and let me know if someone disappeared or was in trouble. I decided on four 25-mile loops, reversing the direction of the loop every other time. While my initial thinking was primarily for safety reasons, it turned out that this format provided a certain comfort level for runners. If runners had always gone the same direction, some might not ever see anyone at all during the entire run.

Once I’d worked out the format and the course, the next problem was simply finding a date. With Texas heat being what it is, any other time of the year would not work very well for a 100-mile race. I figured I'd do a test run on the first weekend in September to see how that date worked in real life. The day was crazy hot and just about everyone melted out of the race and into a “beer circle,” sitting to drink and talk about their adventure, while one last person, German Collazos, continued all night to finish. Clearly, September was still too hot. Finding the right date would be one of those situations where all the stars had to line up perfectly, so I simply sat on the idea and waited. As luck would have it, the Inks Lake Trail Marathon race director, Sam Voltaggio, decided to kill his event. I had a date; the race was on.

Cactus Rose 100 was held for the first time the following year in late October 2007. For the first two years, we had only 50 runners and the race was losing money. My experiment would fail unless I got the numbers up, so I added a 50-mile distance in year three to push the attendance over 100. The 50-mile add-on brought another good increase in year four and, in 2011, I added the 4×25 mile relay as an option for runners who wanted to take on a shorter-than-ultra distance.

Today, the Cactus Rose 100 mile trail run remains small and intimate, catering to veteran runners, while the 50-mile event has become a good testing ground for those who want a really tough ultra. The relay has blossomed into something entirely new and fun. We treat the relay team just like another 100-mile runner with the exception that each runner does only one 25-mile loop. As one runner finishes his/her loop, the next runner takes off on the same loop, but in reverse. So each of the four runners on the relay follows the same directional rules as everyone else. And because this race is such a beast, each runner gets credit for running that loop, so if one doesn’t finish, the others can keep going instead of the team having to drop. We give each relay team finisher an individual medal, but the entire team must finish—in sequence—to get credit for the team finish. The individual relay medals are each a part of a metal jigsaw puzzle that all fit together to form one whole.

The course is still self-serve and hard as nails but there’s still an element of fun with a Halloween costume contest. It’s 36 non-stop hours of self-abuse and grand ol’ camaraderie on some uniquely Texas trails that seem to fit everyone who runs it to a tee.