She remembers the day her love affair with the sport started the way people remember their first kiss: vividly and with a touch of stoic enthusiasm. In her free time between balancing jobs, Dickey would hop on her bike and head to Barton Springs to read books and swim.

“One afternoon, I saw some guys with a slackline set up between two pecan trees,” she recalled. “One of them looked at me and was like, ‘Hey! You should try this, it’s really cool,” so I walked up, tried it, and was like, ‘Phew, screw that! It’s way too hard.’”

“I couldn’t do anything on the slackline, so I totally wrote it off,” Dickey said. “But, over the next couple weeks, I kept going to Barton Springs and seeing it. So I was like, ‘Whatever—I may as well try it again. And after a few days, when I was finally able to take a few shaky steps on the line, I was hooked. I decided I had to walk across it.”

Friend and fellow slackliner Kimberly Margaret remembers the first time Dickey told her about the sport: “She said to me, ‘Kimberly, I know it sounds like a strange thing to do, but I’m hooked.’”

It’s a sport that looks a lot like tightrope walking. But it’s anything but. Slacklines are less taut, more dynamic, and more reactionary to the movements of the slacker (one who participates in the sport). Unlike a tightrope, which is made out of a wire or steel cable, a slackline is made of webbing that stretches and sways with each wobbling footstep.

Though still gaining traction in the U.S., the sport has actually been around for more than 35 years. Rumor has it that slacklining got its start from rock climbers in the late 1970s and early ’80s in Yosemite Valley. In their down time, climbers would take their rope webbing and stretch it between two pine trees or rock outcroppings and try to walk from one point to the other without falling. It was touted as a fun way to work on balance and focus as well as physical and mental awareness—appealing to rock climbers then in the same way it appeals to Dickey today. 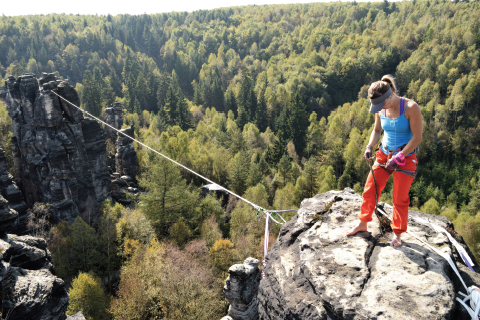 “I definitely wasn’t doing anything extreme before slacklining, and I didn’t consider myself a super sporty person,” Dickey said. “So slacklining…brought me into a whole realm of life I didn’t ever imagine. It introduced me to the outdoors, to the mountains, and also to the feeling of being strong."

“It’s such an individual sport. It’s all about you and yourself on the line—how far you can push yourself, and how concentrated you can be. It’s not about being better than everyone else. Everyone is working on themselves.”

Dickey is possibly most famous for her 2012 Volvo commercial (“The Ballerina Stunt”) in which she traverses a slackline strung between two 18-wheelers as they head down a closed highway at high speed toward two separate tunnels. Looking down, Dickey didn’t see grass. She didn’t see water. She didn’t see an undulating valley floor. All she saw was asphalt.

“[Filming the ad] felt very much like a movie stunt–the slackline moved in all sorts of unpredictable ways,” Dickey recalled. “It was very difficult, very mentally challenging, and also very windy. I had to find some determination in myself to try the stunt over and over again, because it wasn’t an easy line to cross.”

When asked how she reacts to those skeptics who criticize the authenticity of the footage, she laughs. “If it was totally fake, [Volvo] would have hired a supermodel, not me,” she replied. “There’s no need to hire an average-looking slacklining girl when they’re going to film a fake stunt.”

What’s possibly even harder to believe is that just six years ago, Dickey didn’t even know what slacklining was. She had been working multiple jobs (one as nanny, another as a paintball referee) to save up for classes at Austin Community College, and she dreamed of one day going to New York City to study fashion.

“When I first came to Europe, I was just a slackliner,” Dickey said of the sport that elevates slacklining to extreme heights. “I didn’t even know highlining existed.” But as with slacklining, it didn’t take long before Dickey was a pro. From being unable to cross the first four highlines she’d ever attempted to eventually beating the women’s world record, she’s proven that time and again she thrives on overcoming challenges.

“You have to create new challenges for yourself. You can’t just stay at the same level,” Dickey explained. “That world record was a pivotal point for me. It was really cool. I had never been at the top of any activity before.”

“It’s amazing what can come spilling out of your mind in a high-stakes situation like that. It’s a really good way to have some self-reflection,” she said.

Dickey now spends six months out of the year travelling across Europe setting up lines. This year, she highlined in the Swiss Alps, the Czech Republic, the Dolomites in Italy, and found time to set up a waterline in Southern France.

Although she only makes it back to Austin a few times each year, the city still has a special hold on her heart. “Austin is still home for me. While it’s changing a lot, and there’s a lot of things that aren’t familiar anymore, there’s still a vibe about the city that’s homey for me,” Dickey said, adding that Austin is a perfect place for the sport of slacklining to grow.

“Granted, we don’t have mountains, but there’s plenty of big, strong trees and flat, grassy areas around town. Plus, the Keep Austin Weird motto really fits well with the sport because slacklining is a bit unusual and it tends to attract a lot of unusual people,” Dickey said. “And one of the greatest things about the slacklining community is it doesn’t matter where you came from, what you believe in, what your political beliefs are. It’s very accepting. If you love slacklining, then we’re going to be homies.”

Slacklines Dickey owns: 15 +
Go-to foods: dried cranberries, cashews, chocolate, and ice cream. “I have to have ice cream regularly.”
Confession: “I still experience fear. I’m afraid of sharks when I’m surfing, and I’m afraid of death. Being off the ground is just a method I use to confront those fears.”
Words of wisdom for beginners: “There’s a sharp learning curve when you first set foot on a slackline. It feels impossible. And if you give up before you make any progress, you’ll never see what you’re capable of.”

Dickey’s three favorite mantras:
It is what it is.
Let it be.
This too shall pass.
Dickey’s website:
thatslacklinegirl.com
Try it: Gibbon or Eno 50-foot long slacklines sell for around $70; rei.com
Keep Austin Slacklining: This Facebook message board, updated by Austin slackliner and massage therapist TarZen, is the go-to site in Austin for help in getting out on a slackline. “TarZen is an old-hippie guy; he’s great. When I first started slacklining, it was with him,” Dickey said. The group, originally started by Dickey, is free for anyone to join and meets multiple times a week all around town. From the grassy lawns of Zilker Park to the quiet corners of the Greenbelt, stretched between docks along the Lady Bird Lake boardwalk to high up underneath the MoPac bridge along the hike and bike trail–wherever there’s a slackline, TarZen is likely to be there.

Learn How to Cook Dried Beans