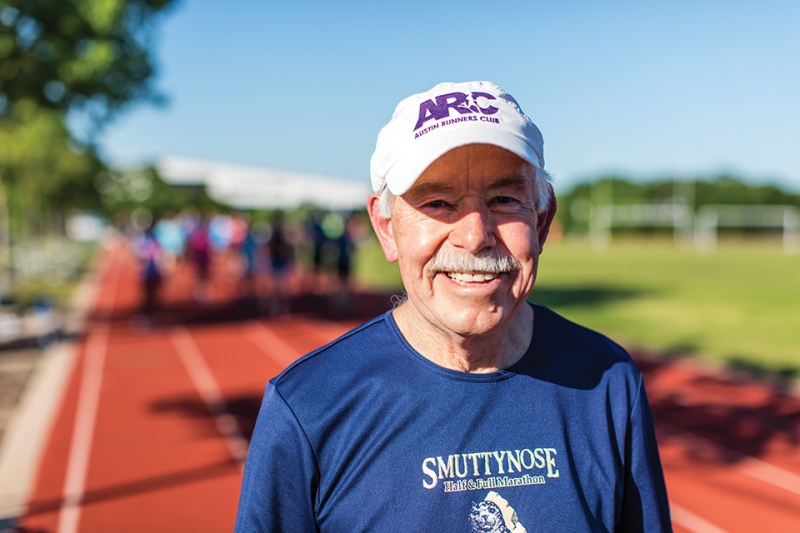 The 73-year-old has been on the move as long as he can remember. He played various sports until a knee injury in his mid-30s led him to take up running.

Since then, he has run not one, but two marathons in every state, and has founded his own running group in Austin, Al’s Ship of Fools.

Al ran his first marathon when he was 50 years old. After attending a marathon training group, he decided to split off and form one of his own, and gradually others joined him.

The name, “Al’s Ship of Fools,” came from an encounter during one of the group’s runs down Lake Austin Boulevard on an exceptionally chilly day.

Ten years worth of training runs later, the Ship of Fools joined the Austin Runners Club as ARC’s Marathon/Half Marathon Training program in 2010.

“It was travel with a purpose,” he says. “We would go and we would run, sometimes in big cities, sometimes in crazy small towns.”

After completing the feat once, the duo did it over again, but this time a bit faster — completing as many as six marathons in a week in six different states.

Cumming’s favorite run was the Mystic Places Marathon in Connecticut, notable, he says, for the scenic Atlantic Ocean view and the five free Krispy Kreme donuts he ate afterwards.

Each Saturday, the Ship of Fools meets at the zero mile marker of Town Lake Trail and takes off at exactly 7 a.m.

The group includes upwards of 70 runners, both novice and experienced, and afterwards, some head over to one of a few rotating Mexican restaurants for a cheap breakfast.

“Usually the people who have a birthday that month sort of show up — and some people for the free cake too,” he says.

“After the workout, you would think people would just head on home,” he says. “But they hang around and we have to chase them off, if you will, after a while.”

Jeff Burrus got his nickname on his very first run with the Ship of Fools. There was already an experienced runner named Jeff in the group, so Al joked he would be called “Fast Jeff,” and Burrus — a larger-built former football player — would be “Big Jeff.”

“Big” has been running with the group for two decades. He met his now-wife on a run with the Ship of Fools and has officiated the weddings of two other couples who met through the group.

He says the relationships he’s formed with people he’s not sure he’d have met any other way have kept him coming back to the “Ship” for so many years.

He says having had “every injury known to mankind” helps him identify problems when members of the group come to him for help.

“Lots of times, people will say, ‘Oh, it’s hurting right in here,’” he says, reaching down to touch the top of his blue Mizuno sneakers. “Well, I’ll say, ‘Have you tried skipping one of the holes on your laces?’ Because that happens to me, and that’s all it takes.”

April says she was basically raised on Town Lake Trail, running with the Ship of Fools. As Austin continues to grow, the group, to her, represents the small-town feel the city can still have.

“Everyone’s very welcoming and supportive and encouraging, and I don’t think that that’s something you really find too much of today,” April says. “You become part of the family.”

More than 20 years since Al started leading the group, April sees no signs of him giving up the Ship.

“I’ve always kind of wondered, like the next time I meet up with him, is he gonna tell me ‘he no longer is coaching the group,’ or ‘he’s going to let someone else take over,’” April says. “But no, each year he’s still talking about them. He’s still just as connected.”

There’s a ship on Cumming’s T-shirt, too. It’s a red tee decorated with a white boat and text that reads “Celebration Run” from a half marathon he ran in Oregon last year.

That race helped him close in on his latest goal — a half marathon in each state. He only has two races left, including one in New York that he will knock off in May.

Where Attraction and Confidence Really Come From