Sitting down with Magnolia Howell, over the phone or in person, she’s liable to give a pep talk. Whether it’s telling you how special you are or what you mean to the world, her goal is only to express why it is that who you are is exactly who you need to be.

And she’s not just saying these things to be nice — she’s saying them because she wholeheartedly believes them to be true. She’s a natural born leader and nurturer who’s taken this love of people both to the track world and to the art scene. And now she’s a Tokyo 2020 hopeful, moving all the way to Austin from Los Angeles to train with people she can connect with.

It seems running has always been a part of Howell’s life, and is as second nature as breathing. She has ran and medaled in major championship and international meets and made it to two Olympic trial finals. She highlights running for the Trinidad and Tobago national teams as a tribute to her Trinidadian father, but taking that passion all the way to the Olympics was — and still is — a peak goal of hers.

But in 2016, when she didn’t make her second attempt to the games, she took a step back from the running world. It was heavy on her mental health, the idea of failure that had been pent up since her first attempt in 2012. She spent months reassessing all that she’d worked for and all that she’d done up until that point.

“I’d been running every day of my life since the fourth grade,” Howell explains. “And then, I just wasn’t.” 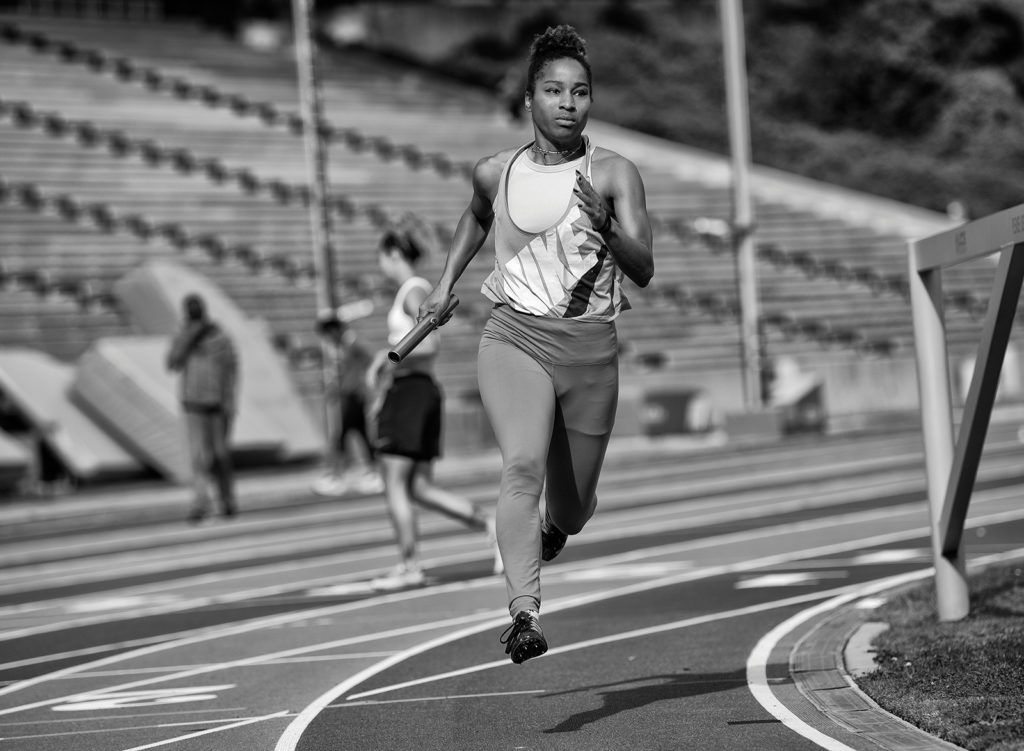 The stress and anxiety were weighing on her and taking their toll when her mother suggested that she take up painting. Her mother even gave her a simple set of paints. Although she’s been running all her life, that’s never been all there was to her — from a young age she had a curious mind and a knack for all things creative.

“Painting? I didn’t think I could do it,” Howell explains. “I’d never painted before, besides when I was a little girl.”

Once she started, she didn’t stop. She found that through the medium of painting, she was able to realize the power of determination.

“I just went into painting the same way I had gone into running,” Howell says. “You have to be determined. You have to trust yourself and your ability.”

After a while, she started showing in galleries throughout the LA area. Expressing both her feelings and her world through paint helped her find a passion for people. She started her own business called Art on the Run that used art to open people up and help them find determination in themselves.

“I wanted to empower others through art,” she says. “Showing them how to reinvent the beliefs they have of themselves — of what they think they can and cannot do.”

But after a tragic loss in the family, Howell again reassessed where she was and what she wanted. She’d been training again but wasn’t where she wanted to be mentally nor where she needed to be physically. The program wasn’t getting her the results she needed.

So, in almost a snap decision, she sold all of her belongings except for a few easy-to-carry items and made arrangements to move to Texas.

“I knew that if I didn’t do it then, I’d never go,” she says. “I left comfort. The apartment I loved, family close by, all of my connections — everything.”

Moving to Austin wasn’t an easy move, but she says it was the right move. She came for the coach she says can get her to the Olympics — Coach Darryl Woodson.

Woodson has 20-plus years of coaching experience and has trained a large number of podium-level athletes in all major championships and Olympic games. He’s served on five USATF teams, the USATF’s Men’s and Women’s Track and Field Executive Committee and the Coaches Advisory Committee. He himself holds a world record and two American records in track and field. Not only does he head the USA national coaching staff, but his devotion to working with Historically Black Colleges and Universities by promoting track and field throughout the communities shows his own passion for people.

“Connecting with the team you train with and the coach is important,” Howell says. “I learned that the hard way, but now I’m in a community I can thrive in.”

She moved without a place to stay until a few nights before arriving. Now, she says the community of Austin has welcomed her with arms more open than she had ever expected.

“The people here are just so genuine,” she says. “Every connection you make is a real one, and people have gone out of their way to help me in ways people in LA wouldn’t have.”

The network she worried about losing from the move proved to be easy to replace. Although she’s still actively looking for sponsors, she found several local businesses that have supported her through food, a place to stay and massage therapy.

But even with the best coach and local support, she’s still wary about the upcoming trials.

Part of that difficulty of age comes from the amount of sacrifices that have to be made as a professional athlete. In their 20s, athletes might not have much holding them back from traveling the country or world to train every day.

“As you get older, you have a whole life you’ve built, and you have to decide if it’s still worth it,” Howell says. “I sacrificed everything I had made for myself, just for this. And that’s hard, even if it’s what I needed to do.”

She says she’s waiting for her “Rudy moment,” and as long as she continues to train her body and stay true to her determination, she says she is confident all of her sacrifice will be worth it in the end.