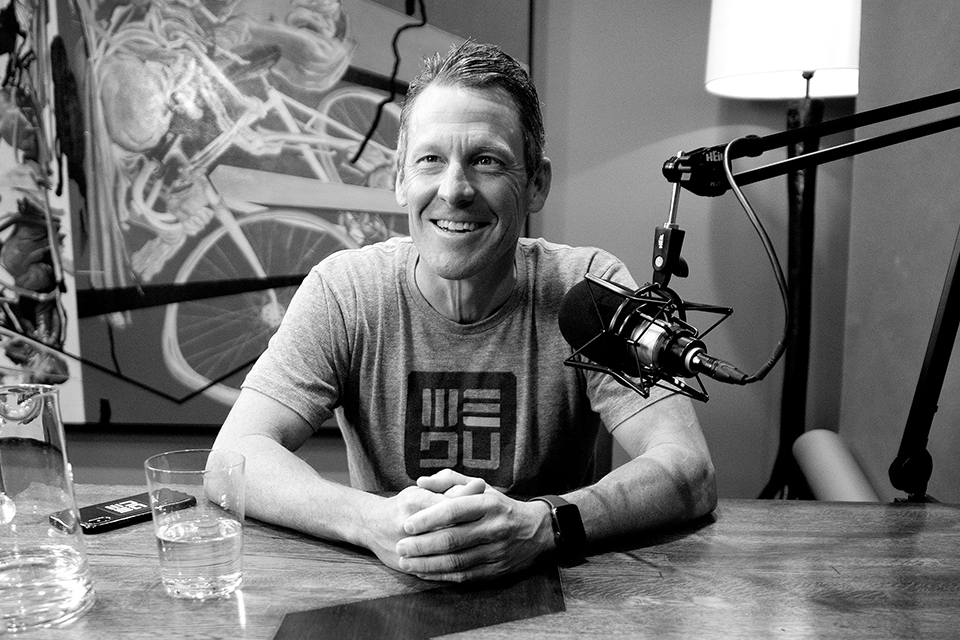 It’s the morning of my interview and photo shoot with Lance Armstrong. It feels reminiscent of a race morning complete with a Vitamix-blended combo of calm, nerves, fear, confidence, excitement, and trepidation. I’ve trained, I’ve researched, and I’ve certainly prepared for this one. Still, though, the nervous energy and “what ifs” make me feel like I’ve had one Red Bull too many…I could scream, pray, or meditate (which I do all of, pretty much simultaneously), but what I really need is to sweat. So, on the morning of my interview with Lance Armstrong, I do something that seems appropriate. I hop on my bike trainer and ride as hard and fast as I can for 20 minutes. In the cycling world, it’s called a functional threshold test. In the real world, it’s called, “stupid.” To everyone, though, it’s called suffering. I had to get those butterflies flying in formation. Instead, I wore them out. I suffered, and I was better for it.

In an inconspicuous studio on Austin’s East Side, Lance greets his friends and guests with friendly hellos and introductions. Fresh from a morning run and shower, he’s completely at ease sporting a WEDU t-shirt, the logo of his new multimedia endurance brand that encompasses cycling events, podcasts, merchandise, and charity work.

When I ask for more details on WEDU, he takes his cell phone from his pocket. “Why don’t I just read you some of the mission statement I wrote just this morning during my run. It’s an exclusive!”

How appropriate that the first answer to a question is a profound mission statement about his future. Talk about moving forward.

“The mission of WEDU Sport,” he reads, “is to inspire and unite the entire endurance community through our content, our events, our people, and our belief that suffering isn’t always a bad thing and that, in fact, it enhances all of our lives.”

“You just wrote my article,” I say as the mic pretty much drops.

“I’m a high-energy person that needs things and goals to do and achieve,” he adds. “If the world would’ve kept going the way it was going pre-2012, I would’ve had plenty of stuff to do, but I would’ve been working for someone else. Those things and those people that would’ve kept me busy in the past are not coming back. Ever.”

So, what’s a man who loves suffering to do? Create another new business, of course! Who likes suffering? Apparently, WEDU.

In addition to the Texas Hundred Bike Ride on April 14, WEDU also produces the Aspen 50 Mountain Bike Race. While those events are paramount to the brand, he stresses that WEDU is not a full-fledged event production company.

“It’s incredibly difficult to scale events because costs are so high and there’s so much manpower that goes into producing events.”

These days, his unanticipated forte is being on the mic with his two extremely popular podcasts, The Forward and Stages. The Forward was initially an idea from his manager, Mark Higgins, or “Higs,” to build a support system.

“We knew so many interesting people that wanted to be of help at some point, and one way of moving forward was to start a podcast and have a conversation with these people,” says Armstrong.

The show, however, has ended up being far more compelling and impactful than simply to support Armstrong. A year-and-a-half in, The Forward remains one of the top sports and recreation podcasts on iTunes and spotlights some of the world’s most famous athletes, artists, politicians, actors, and musicians who often speak candidly, Armstrong says, about some moment in their life where they had to re-establish a foundation, decide what to do, make a plan, and then ultimately move forward.

The Stages podcast, co-hosted by longtime Austin radio personality, JB Hager, shares a unique and unparalleled perspective of the Tour de France and other major cycling and triathlon events. That podcast was truly a last-minute impulsive move, Armstrong says, and the positive response was, frankly, surprising and humbling. In 2018, Stages will go bigger with at least 50 shows, including 20 on the Tour de France. Fan or not, his voice is clearly still relevant in the sport.

“Stages or The Forward are never going to be Howard Stern or 60 Minutes, but that’s okay,” he laughs. “But being in control of the message means we get to produce, direct, script, and distribute the content.”

With the launch of WEDU and these podcasts, Armstrong has started to change the narrative of his legacy.

Just like our beloved Austin, Armstrong has clearly changed a lot over the past six years but still chooses to make this city the primary home for his family and children.

“My relationship with the city and the city’s relationship with me have been rocky, for sure,” he admits. “I understand that, and I can see why. I know the city was hugely invested in me and my story…and there was a lot of hurt and betrayal.”

Still, though, it never changed him in the sense that he didn’t stop running at the lake, going out to eat, or going to school functions for his kids.

Armstrong explains that he decided to stay in his lane and move along as he gave things time to settle down. His bike shop, Mellow Johnny’s, has weathered the tumultuous storm and remains successful despite a tough market.

“Almost everyone in the world knows that Mellow Johnny’s equals me and I equal Mellow Johnny’s,” he says. “For whatever reason, they’re coming out again. The allure of the store is the combo of the shop and the cafe, which make it the coolest shop in the world.”

You know what else is cool again? Surprisingly, Mellow Johnny’s branded merchandise.

“In the early years, we couldn’t make enough of it and when I retired, it tapered off. When I came back again, it went up and then, when 2012 happened, it virtually disappeared. It is now back with a vengeance.”

Does time heal wounds? For some, probably never, but if simple t-shirt and merchandise sales are any barometer of forgiveness, people are softening.

Lance’s notorious competitive edge finally seems to be softening these days as well. Trying to keep up with the young guys in various bike races was taking a huge toll.

“I cracked,” he freely admits. His last major sufferfest was at the Austin Rattler Bike Race.

“You have to train so hard, and your lifestyle has to be like you’re a 22-year-old professional athlete. I don’t mind the training, but I’m not going to eat like a rabbit, and I’m not going to get on the scale every morning. I don’t care enough to do that. I’m 46 years old,” he says, almost as a reminder to his own mortality.

This new softer side of Armstrong doesn’t mean that he still doesn’t bring it hard, though. Regular strength training sessions at Onnit Academy Gym and hard runs certainly prove otherwise, and old habits die hard. These days, he goes as hard as he can, but with a different goal in mind.

“It goes back to suffering. My day isn’t complete if I don’t have a certain element of that.”

Armstrong has endured and inflicted a colossal amount of suffering, but he has also inspired and motivated millions. That’s what makes his story so complicated. In regret, there is also pride. In fact, he is still adamantly proud of his Tour de France performances from 1999–2005.

He does, however, stand firmly behind the work that he did, the sacrifices he made, and the efforts to build and lead his teams. The team he cares most about, though, is his close-knit blended family that includes his five children, his fiancée, Anna, and his ex-wife, Kristin.

“It’s crazy how this family has blended over the decade, and I’m super proud of this team.”

It’s also one of the main reasons he has stayed here in Central Texas. He didn’t want to be the dad flying back and forth every few weeks to see his kids. Clearly, this family owns his heart, which is his primary gauge for decision-making.

“Wherever we are in the arc of my story, I’m going to do whatever it is I want to do. If it doesn’t hit it here, in my heart, then I don’t want to do it.”

Two things that have stirred him recently are a revival of the popular local Bikes for Kids charity and The Last Mile nonprofit. He recently spent a day at San Quentin prison and learned about this innovative program that teaches prisoners how to write code. The experience was intense—a word he doesn’t use lightly. Because of this program, these men can hopefully move forward and become productive citizens.

It seems like he is called to help others use suffering as a tool for growth. Suffering, itself, can mean something different for everyone. Armstrong has spent his life intentionally seeking it.

“To me, it’s the reset. No matter what’s happening in my life, whether it’s emotional- or health- related, my daily suffering on a workout is my reset. After that, it’s like, ‘Okay, now we go.’ If I don’t have it, it’s just bad.”

My reset may not compare to what Lance has endured, but I know what he means. I think we all do. Every day we can use a reset. Whether that’s starting an innovative endurance company or jumping on your bike for 20 minutes, it releases the same mentality: “Okay, now we go.

For all things related to WEDU Sport and Lance’s podcasts, visit: wedusport.com