Bill Schroeder runs every day. His longest running streak lasted 13 years, two months, and three days. He is now in his second-longest streak, which started on Oct. 16, 2011. As the founder of No Excuses Running, a central Texas running program, Schroeder literally walks the walk—or runs the run.

Anywhere from ten to 60 runners participate in the free workouts offered by No Excuses Running, which Schroeder began in 1993. As many runners can attest, being accountable to a group can help maintain workout discipline. “The more the merrier is a No Excuses Running philosophy,” Schroeder said. “In eight years, only three workouts have been canceled because of lightning, and they are never canceled due to it being a holiday. You will always find someone to work out with, and it will always be free.”

In addition to the free, regular (except for lightning) workouts, which take place on Monday and Wednesday evenings, Schroeder and No Excuses Running also offer individual training plans that range anywhere from $30 to $120. Each plan is tailored to specific goals and could include training for a 5K, 10K, a marathon, distances longer than a marathon, or a walk-to-run program for those aspiring to run non-stop for at least 30 minutes.

Schroeder says that coaching has always been a part of his life plan. He coached high school track for five years, high school cross country for one year, the YMCA Striders for Children for two years, and now coaches both adults and children. As a coach, he says his most important piece of advice is that “if you don’t use it, then you will lose it.”  Schroeder added, “It is always easier to stay in shape than to get back into shape. It is even truer the older you get.” 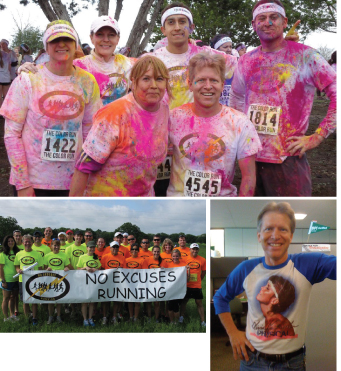 So what is the secret to Schroeder’s success? He runs every day, and so he knows that it is possible to incorporate that into everyday life, no matter what. With regard to his own workouts, Schroeder enjoys running on the track or riding a tandem bike with his wife. When asked if he likes any new gadgets or apparel for his workouts, Schroeder responded, “Less is more for me. I like to wear just shoes, socks, and shorts. I have noticed that running with music makes me run slower because I tune out of paying attention to pace and mechanics.”

Whatever Schroeder is doing must be working. Schroeder boasts that he can still wear the same size of clothing he wore in high school. To prove it, he still wears a concert shirt from Olivia Newton John’s 1981 “Get Physical” concert tour. Schroeder added that he is rarely sick, emphasizing how beneficial regular exercise is for the body and mind.

Schroeder’s company puts on several races throughout the year, and upcoming events for No Excuses Running include Round Rock ISD’s Project Graduation Obstacle 5K on March 1, Opossum Creek 10K on March 22, and Red Poppy 5K in April. Perhaps the most well-known and beloved of Schroeder’s events is the Vern’s No Frills 5K series; these low-key, low-cost (registration is only $1 for adults and free for children grades 12 and below) 3.1-mile races are run on the third Saturday of each month at Georgetown’s Berry Springs Park and Preserve. Schroeder is the race director, and the series is named after Vern Cantwell. Cantwell’s wife ran with the No Excuses Monday group, and while Cantwell never trained with the runners, he always cheered on the group. He died four days after the very first race in April 2009, which he attended and started, after suffering a heart attack while cycling. Proceeds from the Vern’s No Frills series go toward park maintenance and improvements.

In addition to coaching the running groups and putting on races, Schroeder also gives seminars and speaks to groups about goal setting, marathon strategies, speed workouts, and hill training. He plans to keep running and coaching—he’s been coaching since 1981, which is quite a streak in itself. Whether he’s running or coaching, Schroeder doesn’t appear to show any signs of slowing down. “I truly believe that running has given me so much more than I could ever give back,” Schroeder said.

FAQ: Guidance for working out your healthy conundrums

Refuel and Recover with Protein