Meet the Park Rangers of Texas

The law of the land. The educators of the outdoors. The leaders of campers and hikers. The gatekeepers of knowledge. These are the faces of our Texas state parks.

On paper, park rangers are the keepers of our most beloved public outdoor spaces — parks, ranging from city to state to even national. Rangers don’t always look the same; they wear many different hats, ranging from group leaders and program directors to coordinators, planners, advocates, researchers and more. They protect not only the environment and its native inhabitants but also visitors who frequent these areas.

Here are a few park rangers from Texas state parks who give a glimpse into ranger life. 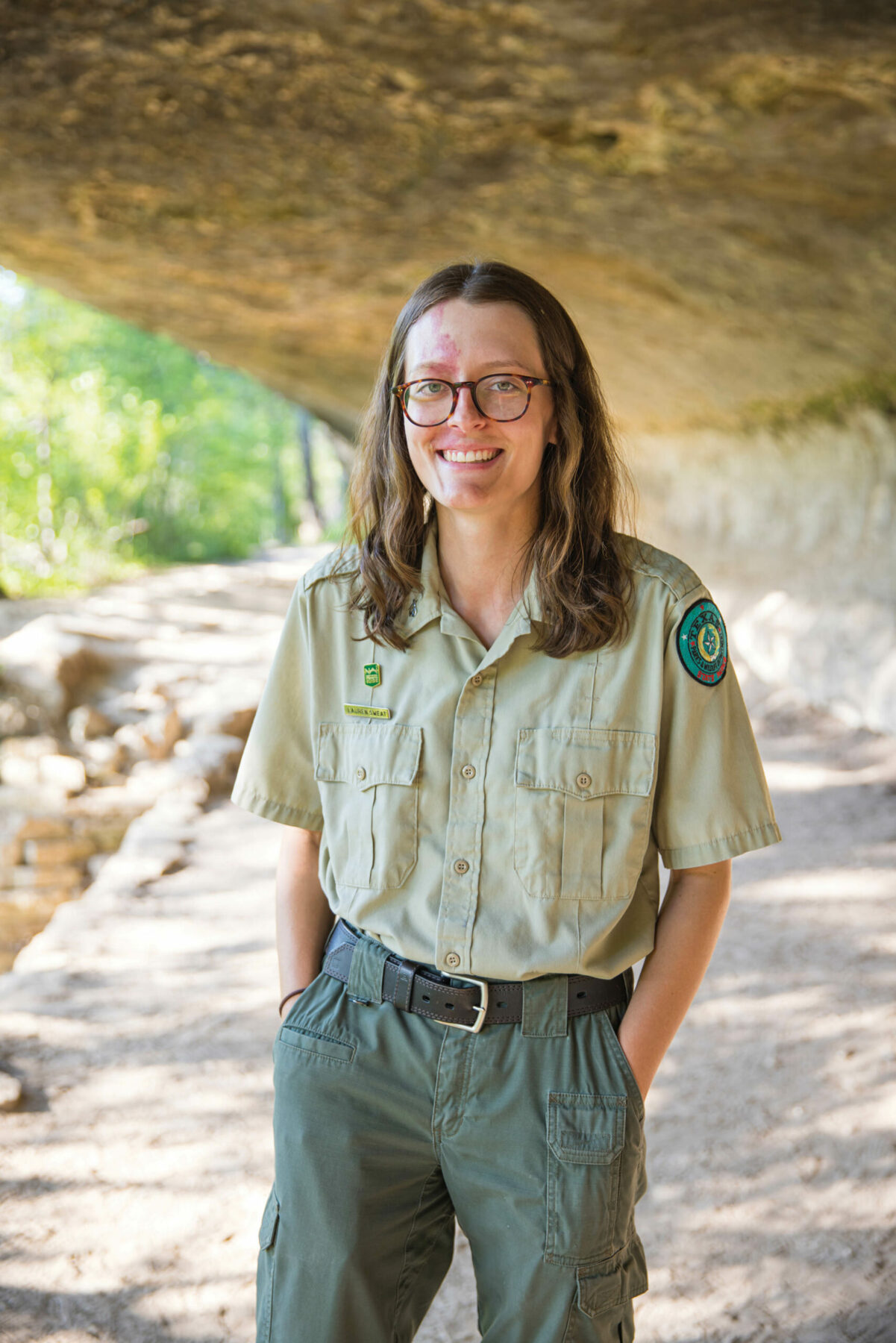 After graduating from The University of Texas at Austin in 2019 as a sustainability studies major, Lauren Sweat took a seasonal position at Inks Lake State Park. In October 2020, she moved to McKinney Falls State Park to work as a clerk. About nine months later, she stepped into her current position as a park interpreter and volunteer coordinator.

Sweat remembers discussions over the global water crisis in her first sustainability course, which motivated her to pursue a career in the outdoors.

“A lot of times, those global sustainability issues keep me up at night,” Sweat says. “But at least working here, I get to make some of those efforts on the ground.”

At McKinney Falls, Sweat has had the opportunity to not only initiate sustainability projects such as raising awareness about recycling but also connect visitors with the park and its resources to provide opportunities for stewardship to grow. During the week, she guides school groups and on the weekends, she leads events such as Skins & Skulls, archery, birding and watercolor painting. She also coordinates service projects including trash pickups and waterfall cleanups. On her days off, Sweat immerses herself in the outdoors, visiting other state parks.

One misconception about park rangers Sweat mentions is that many people assume they trek the trails all day. Sweat admits they can explore during slow seasons like wintertime but McKinney Falls stays fairly busy, especially on the weekends.

Sweat says their busy times can be challenging, mainly because they’re unable to intentionally attend to every person in line at the entrance.

“In a perfect world, I’d love for anybody to come with questions (and) for all to be answered, to have those conversations with us and learn about the park in that way,” Sweat says.

The park’s busyness stems from the unique fact that McKinney Falls is within city limits. The park is about a 10-minute drive from the Austin-Bergstrom International Airport, permitting many people to visit in between flights. Sweat loves that she’s able to make connections and share her passions with people from all over the world.

“If I happen to be walking on the trail and interact with (people), hopefully, I can plant that seed with them in some way,” Sweat says. “And as they visit other parks or outdoor spaces, we could only hope that would continue to grow.”

Sweat intends to stay at McKinney Falls for some time as she says she still has much to learn but hopes her next steps stay within the realm of sustainability. Ultimately, this park and position have enabled her to grow her passion for the outdoors and share it with others.

“To have this space as my own little playground is what makes it so personal to me,” Sweat says. “That sense of responsibility — to look out for (the park) and make sure other people can care about it just as much as we do.”

Growing up in Iowa, Jessica DeBoer and her family took summer trips to national and state parks, which gave birth to her love for the outdoors. In college, she pursued a biology degree and later looked for park ranger positions.

“Those interactions with (rangers) where they’re telling you cool stuff or encouraging you to learn more — I wanted to be that person,” DeBoer says.

Eventually, DeBoer took a job as a customer service representative at Lyndon B. Johnson State Park & Historic Site in January 2017. Almost a year later, she moved to Enchanted Rock State Natural Area to be a park interpreter.

During the week, DeBoer is doing administrative work — emailing, organizing school group tours, helping out with the office. But on the weekends, she is on the field interacting with visitors and leading programs including stargazing, astronomy, geocaching, birding and nature walks. On her days off, DeBoer is typically hiking or birding at other state parks.

Sharing her love for the outdoors is one of her favorite parts of the job. DeBoer recalls moments when she focuses a telescope on Saturn or Jupiter or points out the small fairy shrimp that live on the park’s rocks, visitors will see them for the first time and let out a “Wow!”

“It’s those wow moments,” DeBoer says. “And it’s not just kids but 80-year-old folks or college-aged people — so many people don’t get to experience that sense of wonder.”

Park rangers have the privilege to serve as gatekeepers to these experiences but it comes with the cost of protecting both the visitors and the environment. DeBoer says a common misconception about rangers is that they’re only rule enforcers.

“That misconception hurts the most,” DeBoer says. “We’re here to help you explore and keep you, the park and other visitors safe — sometimes that means saying no.”

Looking forward, DeBoer says her future recently became a bit more complicated, especially as she is currently engaged to a ranger at a different park. However, she says they don’t plan on leaving Texas Parks & Wildlife soon.

“At some point, you have to move into a different position to grow,” DeBoer says. “I’m probably not going to stay at Enchanted Rock forever, but I don’t plan on leaving anytime soon.”

Nicolette Ledbury was first introduced to conservation at 19 years old when she participated in the legacy program of the Civilian Conservation Core after attending college for a year. During this program, she fell in love with outdoor work and later returned to school to study environmental and African studies and nonprofit management.

Following college, Ledbury worked in academia for a bit, later moved to Austin and eventually took a job at Parks & Wildlife. In 2019, Ledbury left the agency and moved overseas to pursue forestry and agroforestry work in Senegal. When COVID-19 hit, she was forced to return to the U.S and stepped into her current position as assistant superintendent at Caddo Lake State Park.

For the past year and a half, she’s had the opportunity to reflect on her love for the outdoors.

“What’s more important than the future of our earth and how we conserve the special places we love so much?” Ledbury says. “(My experiences) cemented how important this work is.”

As an assistant superintendent, Ledbury manages the maintenance staff as well as assists in on-the-ground work. She also participates in multiple land acquisition meetings, manages partnerships and grants, and interacts with the community. Her days off look a bit different from others as she lives on-site and is on call, but she still takes time to enjoy outdoor activities like hiking, kayaking and walking her dog.

Legacy is the centerpiece of our park services, which serves as a major motivation for Ledbury. She recognizes that the small part she and her staff play contributes to the entire legacy.

“We are one piece of the conservation puzzle in Texas,” Ledbury says. “(…) My hope is that in a hundred years, people look back and say, ‘Here’s this pocket of time that these people did incredible work and laid the groundwork for us.’”

Park rangers lead these conservation efforts, but Ledbury assures it’s by the hands of the entire staff. Ledbury says many people think rangers are only those leading groups but a ranger position encompasses a variety of responsibilities including maintenance, management and administration work.

“There are embedded expectations that we are the face of our park. We are the face of conservation,” Ledbury says. “(…) We’re all park rangers, but we’re all doing our own piece of the puzzle.”

Ultimately, Ledbury hopes her next steps fall in line with conservation and getting more diverse perspectives in the outdoors.

“My passion is diversity and inclusion, parks or conservation, and how you bring the two together,” Ledbury says. “As long as I’m doing things within the wheelhouse of my passions, I don’t think I can go wrong.”

Without our park rangers, our experiences of public outdoor spaces wouldn’t be the same. They lead, teach, clean, research — but at the end of the day, they each possess a deep well of knowledge and experiences to not only share with the public but also motivate why they wake up every day to get the job done for current and future generations.

How to Treat an Ankle Sprain