Austin Fit > Articles > Lifestyle > Home is Where the Heart is

Home is Where the Heart is

There’s a new house at the corner of Cherry Lane and Mountain View Road in Tarrytown. It’s sleek, modern, and equipped with beautiful wood panels, tiling and fixtures. Aesthetically, the house is everything one could ask for and more. But directly behind the beautiful main house stands a modest garage apartment, filled with children’s toys, a walkway lined with shoes, and uniquely painted walls leading to the upstairs—that’s where the Glauser family calls home. 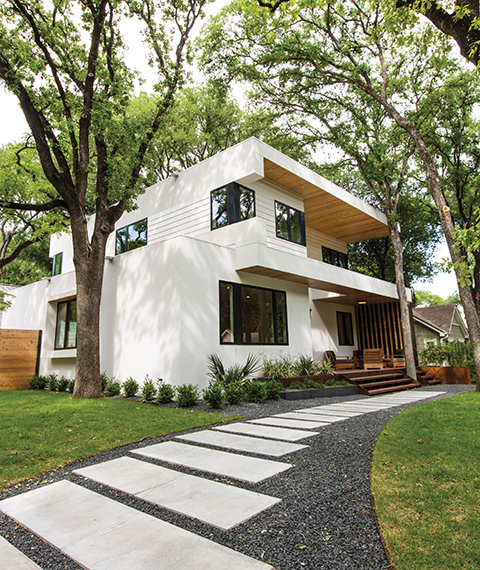 For Daniel and Nicki Glauser, a house doesn’t define home. Rather, it’s a feeling—being together and making memories as a family—regardless of the size, space, or location of where they currently live.

The couple have called many different places home since they first met. A tent for three months while working in Patagonia, an airstream, and a house on the east side of Austin. The East Austin home was their first project together and the start of Daniel’s building career. While on a flight home from a snowboarding trip the couple imagined the design for their home together on a napkin. Countless drafts and revisions later, they found the final design to be almost exactly the same version as the original napkin drawing.

Over the past several years as their family has grown, so has their vision. But not necessarily their living space. Daniel is a home builder by trade and owns his own building company, Glauser Building, which focuses on smart and sustainable homes. He bought the original one story house at 2912 Cherry Lane with the intention of renovating it. “But like most projects, it just grew and grew to where it’s almost none of the original house left,” he says.

Before starting to rebuild the impressive main home, Daniel first renovated the detached garage. He transformed it into a functional living space: a one-bedroom, one-bath garage apartment, where the family has lived for the last two years. “Originally the upstairs was just a wet bar, so we turned that into a kitchen,” Daniel says. “Then we added a window to the closet, and that made a nursery for our youngest, Cole, while he was a baby.”

The garage apartment is two stories and 650 square feet upstairs. The three kids share the one bedroom furnished with a bunk bed that also has a trundle bed. The living room doubles as Daniel and Nicki’s bedroom, where they sleep on a pull-out couch ten feet from their children. They store their sheets and blankets in the cabinet of a side table near the bed. “When you live in such small quarters, everything has a place,” Nicki says. 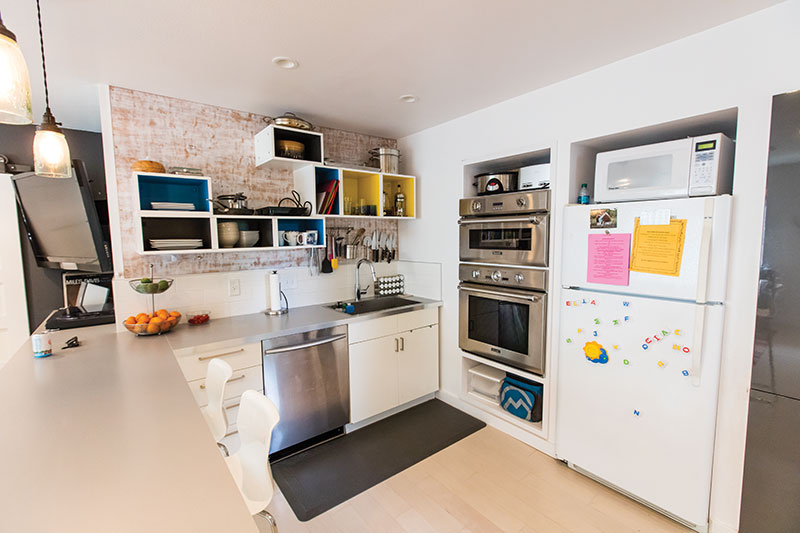 The kitchen has a full fridge, a microwave, and dishwasher. The only appliance missing is a stove which they replaced with a hot plate. Nicki cooks nearly every night for the family and they don’t seem to mind the proximity. “We like to be around each other and that helps. None of us are introverts in the sense that we need space to recharge—we recharge on each other,” Nicki says.

While they were building and the backyard was mostly taken over by construction, Daniel and Nicki had to get creative with the space they had. The downstairs garage mostly serves as a play area for their three active children, Gavin (8), Tenley (6) and Cole (4). The play area is an indoor jungle gym—equipped with bars, rings, and ropes hanging from the ceiling.

“Our oldest, Gavin, was all big body play—he was always jumping on the bed or rolling on the floor. The only thing he sat down to do was play legos,” says Nicki. “We needed a space where they could run off all their energy. It started little by little with a few rings and then we just kept adding more things.”

The new main house is four bedrooms and three and a half bath, totalling 2,379 square-feet, with an office as well as flex space. It has enough room to live—without any wasted space. It is a sleek and modern design, with unique features such as shadow boxing around corners, a BauBuche wood slat wall in the foyer, and an Italian kitchen backsplash. The backsplash is a complimentary mix of masculine gray stone with a detailed feminine floral design etched in. After falling in love with it online, Nicki tracked down the only slab of the Italian stone available in the U.S.

The house was built to Austin Energy Green Building Program 5-star (highest rated) energy efficiency/green building standards. Everything from the dual-flush toilets to its design (courtesy of architect Clark Richardson) make the house more sustainable and eco-friendly. The footprint of the new house is smaller than the original house. They were able to keep the large elm and post oak trees that surround the house, providing shade to cool the house and keep it more efficient. “With the trees being so high and the [expansive] windows, it’s neat because it sort of feels like you’re in a treehouse when you’re upstairs,” Daniel says.

The Glauser’s won’t be moving into the new home, instead they’ll stay in the apartment until they’ve figured out what’s next. Whether it’s a new permanent house, or a trailer on the road for a year, they don’t care as long as they’re all having fun, being loud, and enjoying life. “We just really love doing things together,” Nicki says.