I had it all worked out.

After traveling to Thailand and Cambodia last summer in the middle of a training cycle for the Marine Corp Marathon, I got caught up in the trip, skipped a lot runs, and paid for it terribly a month later in Washington, D.C.

That would not happen again. This time, there would be lots of miles during an 18-day stay in Guatemala. In the middle of training for a late-May marathon, this was a crucial time frame and the same mistake would not be made again.

It started with Antigua, a gorgeous town at about 5,000 feet above sea level just outside of the capital of Guatemala City. The town’s perfect cobblestone streets convey its history and make for pleasing photographs but make for nearly impossible running. Three days behind right out of the gate. Next was Comalapa, at about 7,000 feet above sea level. Unfortunately, after 14 miles on our first day there, I became ill (from either food, water, altitude, or a mixture of the three), was stuck in bed for a full 24 hours, and didn’t feel myself for a couple more days after that. Wanting time for ample recovery, I pushed my return to our next destination. One run in seven days.  Arriving in San Marcos de Laguna, a village sitting on the shores of Lake Atitlan and still at about 7,000 feet, I quickly realized there would be no running here, either. There are no roads in or out (we took a boat from Panajachel) and anything more than a quarter of a mile or so from the lake very quickly becomes a vertical climb on a dirt trail—though the hills and trails above San Marcos de Laguna make for some of the more scenic hiking imagineable, including staggering views across Lake Atitlan to Volcano San Pedro. The town’s yoga studios, herbal healers, and tea shops created some serious relaxation possibilities, but it had now been eight days with only one run. 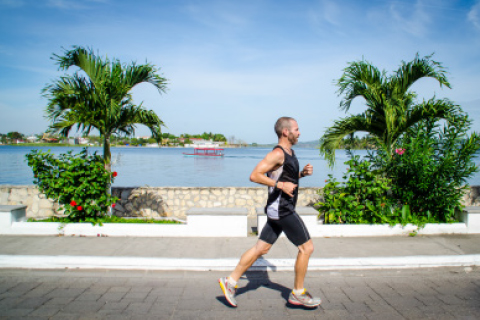 Just like that, I was a week behind, and panic set in. Then I began to think at length about why I was here. Our week in Comalapa had been spent volunteering for Long Way Home, an organization using “sustainable design and appropriate materials to construct self-sufficient schools that promote education, employment, and environmental stewardship.” We’d worked with locals to continue constructing a school complex built almost entirely from old tires, plastic bottles stuffed completely with trash from in and around the village, and cob, a molding material made from mud, hay, and cow manure. Following our time in San Marcos de Laguna, we would be spending another two days volunteering at Casa de Sion, a tiny orphanage in nearby Godinez, which also provides medical services and assistance to new mothers. We were to build a pigpen for use by the local farmers, paint part of the new floor for the orphanage, and host an art class for many of the village children following their school day. In addition to Antigua and Lake Atitlan, we’d be visiting places like Flores, a tiny island surrounded by easily accessible beaches and colorful hostels and villas, and Tikal, a vast and well-preserved Mayan ruin from the mid-700s. We’d also be seeing Livingtson, a coastal town on the Caribbean home to a large Garifuna population and its unique culture. These towns are alive with the varied and vast flavors of this wonderful country.

Put in that light, did I really want to risk tainting such an opportunity because I was stressing over something I’d only began doing in the first place so that I could alleviate stress in a new way? If I missed my ultimate goal of qualifying for the Boston Marathon in May, would I not have other chances? How many times would I be here, in this place with these people for these reasons? Was my running, something begun three years ago because my old way of dealing with life was so terribly destructive, now becoming unhealthy itself?

Framed in that fashion, the solution was clear. I would live every moment of this trip, sparing myself no pleasure and taking it all in. If there was time for a run here and there, I would do that as well, but because I wanted to and not because I had to. Running in a foreign place should be fun, and I would do my best to make sure it was. When I got home, I could reassess my fitness and make a decision from there.

For the next week, that’s just what happened, from the time the sun came up until it went down again. Leaving San Marcos for Flores, the running was more accessible outside of town, off the island, and I ran wild. Two runs of eight and 13 miles, weaving through the countryside as locals prepared for their days, going to and from work and school—I saw things I wouldn’t otherwise have seen. Relaxed and feeling great, I enjoyed every moment of those runs. Arriving in Livingston, on the coast of the Caribbean, though, was another town with about two miles of road and completely surrounded by jungle or ocean. No problem. Swimming, hiking, snorkeling, and relaxing replaced running, and the enjoyment continued to increase.

At home, I track every single mile, and most of my plans are made around running. I eat to run, I sleep to recover from running, and I run so that I can run more and faster later on. I know I’m not alone, as I spend time with other runners who have the same single-minded focus toward running. I now tend to think we could all benefit from the occasional reminder on just why we do what we do and the purpose it serves in our lives. 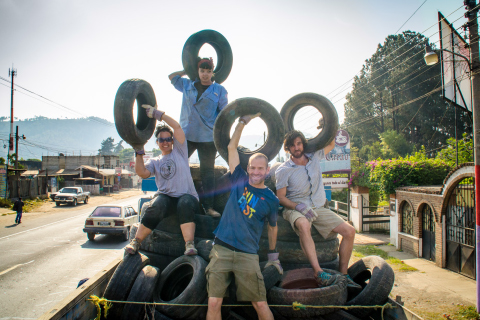 Sitting in a cafe floating on the Rio Dulce and preparing to head home in about 24 hours, I’m excited to get back to my routine, figure out where I am in my training, and find that competitive spirit again. I will probably need to find a new marathon to run, as I was going to be cutting it close and have probably set myself back a week or so while here. We are already planning a two-month trip to Africa and Europe later this year, and I intend full well to take with me the lessons learned while away this time. I don’t know for sure that I’ll ever make it to Boston, but I can now comfortably say that I will enjoy each and every step of the journey, wherever it may end.