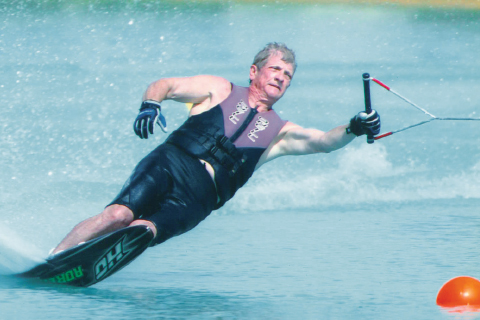 Not just a waterski competitor, Jeran Hooten lives the dream. He and his wife, Janet, and their family, all ski. More, they help out as officials at regional competitions. On a recent weekend, Hooten was Safety Director for a competition and his wife was a scorer. Hooten, 69, is an orthodontist who grew up skiing on Lake Austin. Now the Hootens co-own Frame Switch Ski Lakes in Taylor where they train, host competitions, and provide the space for others to train—including the University of Texas Water Ski Club.

Hooten first skied in California as a young teen on a vacation. Upon their return to Austin, his family bought a ski boat and started skiing on Lake Austin.

“It was just one of the greatest things we’ve ever done and I just stayed at it,” Hooten said. “I didn’t tournament ski that first year, but I’ve skied pretty much since I was 14-years-old.” He competes in “three-event” skiing competitions which include trick, slalom, and jump. He said the biggest change in the fifty-plus years he’s been competing is that there are almost no tournaments on public water anymore.

“It’s all on private lakes, like [Frame Switch], like Texas Ski Ranch,” he said. “To do the sport as it’s done now, you need controlled water. We used to have tournaments on Town Lake, which is pretty much controlled water, but you had storms and current. You have storms on private water but as soon as it’s over, the issue of it is gone so you don’t have couches going down stream… I’ve had some pretty wild experiences with things like that.”

Hooten took about a 20-year break during dental school, residency, and a stint in the Army. But when he came back to Austin, his parents had built a house on Lake Austin. Before long, he and his wife bought a house on the lake about five doors down.

The ski community is familiar—one might say familial. They all know each other. The Hootens skied with Tom Fooshee’s family, and Steve Present, owner of Texas Ski Ranch, among others.

“Tom grew up skiing with his brother Graham and his dad on Lake Austin,” Janet Hooten said. “They were very big into competitive skiing when they were younger.”

The three-event tournaments are on conventional skis, albeit different types. Slalom skis are about 5-6 feet long and about five inches wide. “Wakeboards are wider and shorter,” Hooten explained. “A lot of wakeboarders, people like Tommy [Fooshee], their tricks are aerials. We try not to do aierals on slalom, on purpose, or by accident; they can hurt you pretty good.” Hooten explained that a trick ski is smaller than a wakeboard but can do a lot of the same things, although expert wakeboarders can get more air or height than a trick skier. “A wakeboard has a little bit of a fin to it so you get more traction; a trick ski has a slick bottom.” Jumper skis, for lengthy jumps off ramps are long, look almost like snow skis. “When Jeran first started jumping, when he was a little boy, they actually had metal on the front—to keep them from breaking,” Janet Hooten said.

Hooten is a compendium of knowledge about water skiing records, several from personal experience. “The world record now in tournament jumping is 247 feet,” he said. “When I was a kid skier, my partner, Penny Baker, who is the uncle to my son’s wife, held the world record at 150 feet which was set on Lady Bird Lake.” The current world record holder, Freddy “The Nightmare” Kruegar, will be in Austin doing a clinic on jumping the weekend of June 16 at San Marcos River Ranch.

How old is too old to ski? “It’s never too late to ski,” Hooten exclaimed. “There’s a man named Elgin Faulkner, a resident at Lago Vista and at Houston, and he holds a national record in distance jumping for over 80, like 49 feet. He’s incredible, does all three events, slalom, trick, and jump. He’s skied with us at our lake, very popular, a senior official.”

Hooten has held regional records along the way. And, speaking of family, his son, Austin physician Jody Hooten, is the current regional record holder for men’s 35-45 jumping; his record is 169 feet.