Bringing the Sport of Wakeboarding to the Masses 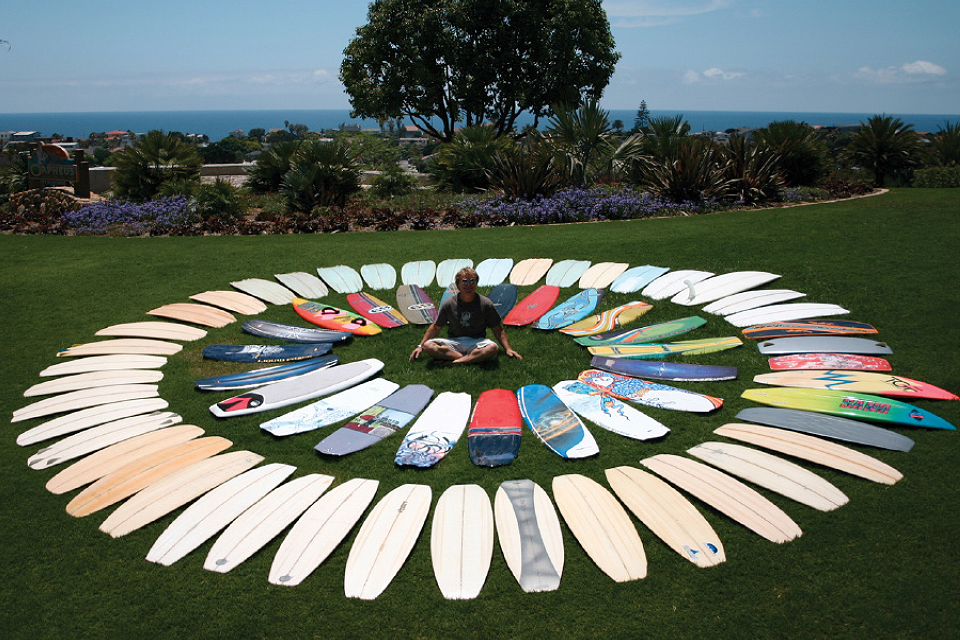 School is out, warmer temperatures are here, and many Austinites will agree that the best way to stay cool and active for the next three months is to hit the water. There is no shortage of swimming holes, lakes, and water parks in Central Texas, but if you’re looking to try something different this summer—say, a water sport that provides both a thrill and a full-body workout—then consider joining the increasing number of men and women across the globe who are stoking out on wakeboarding. Once a fringe pastime of surfers and skateboarders, today wakeboarding is an officially sanctioned sport that is growing in popularity every day.

Although many stories and legends have circulated for years about the origin of wakeboarding, it is well established that Austin was one of the sport’s birthplaces. In 1985, an architecture and engineering student by the name of Jimmy Redmon had the idea for what would later become known as wakeboarding while water skiing with friends. A competitive surfer and skateboarder, Redmon decided that he wanted to try surfing behind the boat. As it happened, he had been working in a surfboard factory while going to school and knew how to make and shape surfboards. Drawing from his work experience and taking inspiration from windsurfing boards, Redmon created a miniature surfboard and then added foot straps to the design. This innovation enabled the rider to stay attached to the board while doing tricks. “I thought, ‘Wow, it really works!’ It wasn’t a sport yet,” Redmon explained, “These were just toys we were making for fun to surf behind boats after classes.”

It might not have been an official sport yet, but Redmon and his friends were drawing a lot of attention out on the lake with their boards—and their boat. “We had the most unorthodox wakeboard boat on Lake Austin,” he laughed. “A boat more suitable for shrimping than wakeboarding. But people gave us a little leeway on our boat because what we were doing looked like so much fun. We’d hop in their boat and show them, make a new friend, teach them how to do it.”

Sensing the makings of something big, Redmon decided to quit college to open a wakeboarding company. “My parents were so excited,” he joked, “But I felt like this was the time; I had to go for it.” Redmon and his brother John began making wakeboards and selling them one by one.

Coincidentally, during the same time a California surfer named Tony Finn had designed his own wakeboard, the Skurfer, which was gaining popularity on the West Coast. Redmon and Finn met by chance at a trade show and eventually joined forces to create some of the most ground-breaking innovations in wakeboards, including the twin-tip design, which allowed the rider to ride either forward or in the switch-stance position. “That was a big revolution,” said Redmon. “After this [twin tip] was introduced, every wakeboard that followed used that design.”

Although wakeboarding originated as a lake sport, it has since found a comfortable home in cable water parks. A concept that originated in the 1960s, these unique parks feature an intricate system of cables over a body of water, enabling skiers, wakeboarders, and other water sports enthusiasts to be towed without a boat. One of the most well known of these parks is the Texas Ski Ranch (TSR), located in New Braunfels, Texas. According to TSR partner Steve Present, cable parks offer beginners “a nonthreatening environment in which to learn.”

Redmon agreed with Present about the ease of learning that such parks provide. “The thing about wakeboarding at a cable park is you’re actually sitting on the edge of a starting dock, so instead of being yanked up and out of the water, it’s like you’re basically getting pulled off a dock,” he said. “People are able to learn in that environment so quickly and easily. Everyone’s going to fall a bit when they’re learning, but you’re able to do that quickly and with less stress.” One way that TSR facilitates learning is through its cable system for beginners called the Little BRO (Bruno Rixon Original). A two-tower version of the traditional cable system, the Little BRO uses a smaller body of water and acts as a “bunny slope” for wakeboarding newbies, offering programmed speeds that are suitable for beginners.

What may be the most noteworthy aspect of cable parks is how—having removed the necessity of a boat—they have brought the sport of wakeboarding to the masses. Redmon summed up this significance quite simply: “Cable parks make the sport of wakeboarding bigger; $100,000 boats don’t.” He continued, describing the impact of cable parks on the expansion of wakeboarding. “Because of the ease of learning behind cables and the accessibility and affordability of riding behind cables, everyone can do it,” he explained. Today, cable parks can be found all over the globe—for example, there are more than 70 parks in Germany alone, and last year’s cable world championships were held in Abu Dhabi.

Further bringing the sport of wakeboarding to the masses is the annual “Free for All” tour sponsored by Redmon’s and Finn’s wakeboard company, Liquid Force. Held at various cable parks around the country, these events are geared toward those who are new to the sport. The wakeboarding curious can try out the cables, test different types of equipment, and get tips from the pros—all free of charge.

Redmon founded the World Wakeboard Association (WWA) in 1988, marking another monumental stride forward for the sport. Up until that point, wakeboarding competitions had been held only as promotional events. Redmon had hosted several in Austin, while Tony Finn had held Skurfer contests on the West Coast. Even with this exposure, wakeboards were still classified as “water toys,” being lumped into the same category as inner tubes and not afforded the same legitimacy as water skiing. “[There was] the idea that if you’re not [water] skiing, you’re screwing around with a water toy,” said Redmon. “But it’s radically different. People are doing specific moves, progressive moves, wanting to compete.” Redmon’s motivation for creating the WWA was simple: he wanted wakeboarding recognized as a valid sport. “The things that the best guys out there were doing were every bit as athletic as what we saw being done in other sports,” he said. “The surest way to take an activity and turn it into something that has more legitimacy is to turn it into serious competition.” The WWA created official rules for the sport and began to sanction contests, including the Wake Park World Championship.

Evolution of the Sport: Wakeskating and Wakesurfing

Over the years, wakeboarding has evolved into two popular off-shoots: wakeskating and wakesurfing. Echoing the grassroots movement of wakeboarding, these spinoffs are quickly gaining in popularity. This enthusiasm has resulted in the creation of specialty boards and stand-alone competitions unique to each sport.

Like wakeboarding, wakeskating can also be done either behind a boat or a cable; however, riders utilize a board that is more or less equivalent to an oversized skateboard. Wakesurfers also eschew foot bindings, meaning they must maintain control of their board with their feet while performing difficult skateboarding maneuvers in the water—no small task.

Wakesurfing has existed for as long as wakeboarding but has recently begun to expand by leaps and bounds. Wakesurfers use a smaller version of a surfboard to catch the wake of a boat, riding behind it and performing tricks without a tow rope or foot bindings. The obvious disadvantage of this sport is the requirement of a boat; however, this detail has not diminished wakesurfing’s growing popularity.

The wakeboarding movement does not show signs of slowing down anytime soon. With new cable parks being built around the world every day, young and old alike are getting hooked on a fun and exciting way to stay in shape. Whether you want an easy, relaxed tour of the lake or are seeking to catch some serious air, there’s a sweet spot for every stoked wakeboarding wannabe. So this summer, take a break from the swimming pool and head out to your nearest lake or cable park to give wakeboarding a try.