Every summer, Mallory Brooks, coach for Team Rogue and owner of Spectrum Trail Racing, along with her husband and their 7-year-old son, pack their things into a truck and a soft topper camper shell. Heading into the land of trees, mountain ranges and footpaths, the family drives around to places of high altitude to help Brooks and her husband work on building aerobic capacity and red blood cells.

“June is training, and July is performance,” Brooks says.

If there is any proof that runner’s high exists, it’s ultramarathoning.

“An ultramarathon is really just running more than a marathon,” Brooks says. “It’s a broad term, but you have everything from people that race to people who go out and do it on their own.”

Brooks began her running career when she was invited to participate in the Pikes Peak half marathon, unknowingly committing to running 13.2 miles up a mountain.

Now a proud owner of 40 pairs of trail shoes, Brooks has many miles under her feet from competing in ultra races and chasing down what are known as FKT’s, or fastest known times.

Peter Bakwin, a lifelong adventure athlete, established the term FKT. With two other ultra runners, he created a website dedicated to tracking the fastest times people complete trails around the world under specific requirements.

Different from signing up for a hosted race, challenging an FKT can be considered a form of ultramarathoning considering the length of many national trails.

“It is a cool way to have a never-ending race of sorts,” Brooks says. “There is no glory in it, no money or medal, just bragging rights and your name on a website. It is a very primal way of racing, because you are not getting anything out of it other than the joy of trying to beat a record.”

In 2017, Brooks and another ultra runner, Allison Macsas, broke the women’s unsupported record for the Wonderland Trail. Running the 95-mile loop which circumnavigates Mount Rainier, the two girls carried their supplies on their backs and completed the run in one day and five hours.

Although their record was broken the next year, Brooks and her husband train each summer to try to break the record again.

When it comes to training, Brooks says it is different from training for a marathon. She actually runs less than the marathon runners she trains, running up to about 60 miles a week.

“For ultramarathoning, it is not as much about running as it is about keeping your heart rate high for an extended period of time,” Brooks says. “So, it’s almost like you shift your focus from mileage and more on endurance.”

During any extended period of time running, it is not only about physical endurance but also mental endurance. Apart from blisters, stomach aches, cuts, scrapes and bruises, the ability to deal with adversity and other issues as they arise in a run is just as important.

“You basically go through a lifetime of emotions during a race like a 100-miler,” Brooks says. “Our bodies are super smart, and when your body moves for 24 hours, it’s going to yell back at you. I like to think of it as your body trying to tell you it would be in your best interest to stop. I always encourage my runners to take a moment to recognize their body is yelling at them, to thank it for sending those signals, and then to basically say, ‘But I’m not going to listen to you right now.’”

Jessica Head, another ultramarathon runner from Austin, says the reason she enjoys ultramarathons is because she likes pushing herself to her limits and seeing how she does when it gets hard.

“It is what I like about marathons, too, but it’s a different type of hard, to run fast and sustain,” Head says. “An ultramarathon is different. It is more of a mental battle for me. The amazing thing about ultramarathons is you can feel really bad early, but that will pass. Then you will feel good. And then bad again. But, if you are patient, it’s like life, and you can always work your way through it.”

Head ran her first half marathon 6 years ago. After a friend asked her to run the Marine Corps Marathon, Head continued to run, working to break personal records and eventually qualify for the Boston Marathon.

After qualifying for Boston, Head ran her first ultramarathon in March of 2017.

Her most recent ultramarathon she participated in was a 24-hour race called The Gain. The challenge was simple: run for 24 hours as far as she could. Alone for half of the race, she completed 80 miles on the dirt roads of her ranch in Central Texas. 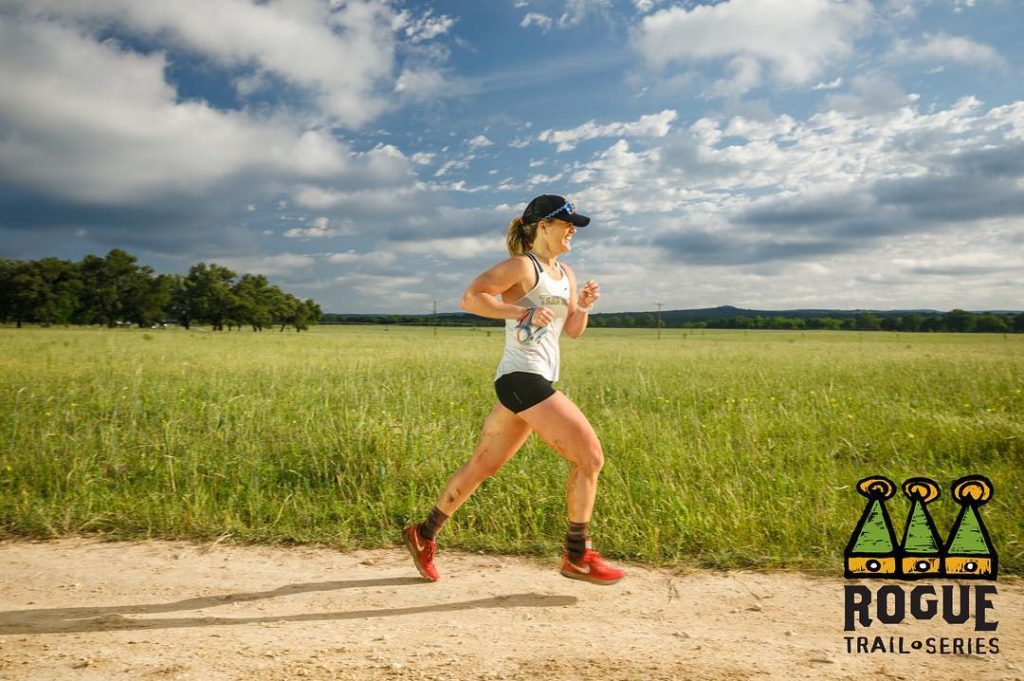 “I like to break my ultras into pieces to get water and a snack in between,” Head says. “Usually for an ultramarathon, you have to plan a bit. This last time I took it 10 miles at a time — that helped me a lot.”

The planning and training for an ultramarathon is something Head says often gets overlooked.

“In ultramarathoning, preparing your body also looks like preparing your stomach,” Head says. “When you are out there for so long, you need to practice eating food and running. To prepare for an ultramarathon is much more than just training physically — there is also a mental side and a nutritional side.”

While Brooks recommends anybody wishing to attempt an ultramarathon should have at least a solid year of running, strength training and preparing before they even consider signing up for an ultramarathon, the trail and ultra community are super inclusive.

“It’s funny, you almost have to have something a little wrong with you to want to be a trail runner,” Brooks says. “The community is made of quirky, loving people that aren’t there to be fast. In general, it is less competitive and more embracing, and there are easy ways to make all sorts of adjustments to make sure the group is more inclusive for any runner.”