Time to own up: You want to run fast, or you probably wouldn’t be reading about racing shoes. Here’s our look at racing shoes that are suitable for your fastest road running, whether it’s a mile or a marathon. All eight shoes are updated models—tried and true—thanks to the brands’ commitment to the need for speed.

It’s always a good idea to adapt to racing shoes before wearing them in an important race. They’re more minimal than traditional training shoes so there’s less protection. While the physiological benefits from wearing racers vary from runner to runner, there are benefits. The shoes offer psychological benefits as well since light shoes make you want to run fast. Bottom line: What can racers mean for the time on the clock? A general rule of thumb is one second per ounce (of shoe weight) per mile—though it’s not just about the shoe. Here’s hoping that your training, shoe choice, and pace judgment align for some great races.

The Zoom Streak LT 3 is the latest iteration of an iconic Nike racing shoe. The fit and feel are spike-like, in keeping with the shoe’s speedy reputation, and it’s now nearly an ounce lighter in a men’s size 11. The upper is a minimesh with no-sew overlays and a glove-like fit. The overlays at the toe are minimal but effective, and the lace throat  and internal saddle really hold  the foot well. As in previous versions, the midsole is a low-profile design, here resculpted to take advantage of its geometry to best effect, rounding the edges to save weight and position the foot for toe-off. The outersole is carbon rubber in the heel with blown rubber in the forefoot, each segmented to allow the foot to move efficiently. A TPU shank gives some structure to the sole. Its light weight, spike-like fit, and reasonable price were enough to earn the Zoom Streak LT 3 honors as our Best Racing Shoe.

The tough and responsive Adios has been the workhorse of the adidas racing shoe line. The upper receives the most attention in Round 3, because the other components have performed so well. The upper’s fit is a bit closer in the forefoot. The toe rand is notched for better flexion and has a thinner synthetic suede material than Round 2. The midsole is unchanged: boost foam sculpted for efficiency that manages road distances ranging from the mile to the marathon. The outersole is Continental rubber, here thinned to shave weight while also improving the flexibility and traction of the sole. These incremental changes add up to an even better racer. 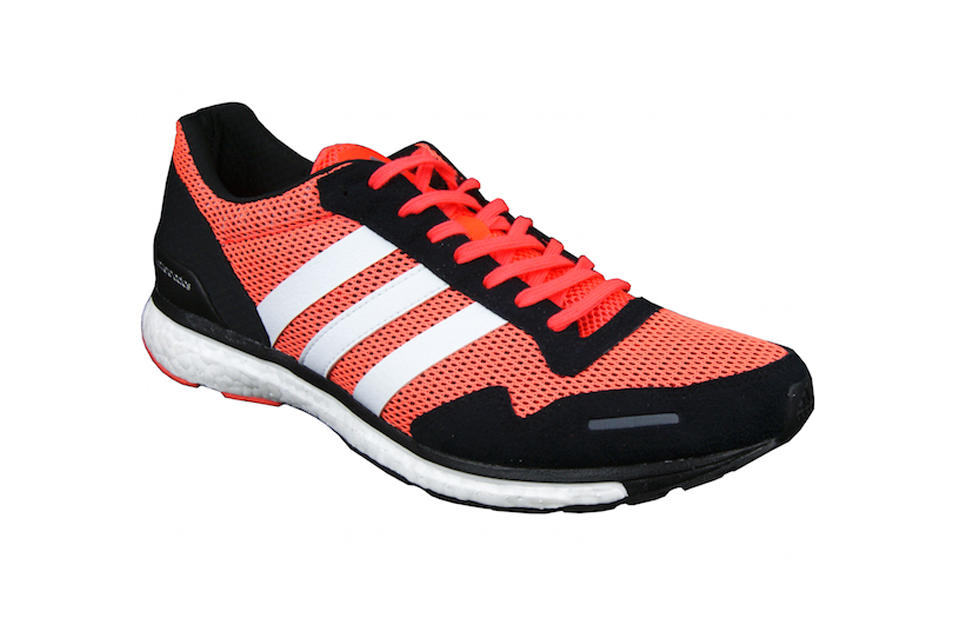 The HyperTri, ASICS’ response to the needs of triathlon racing, is a close relative of the Gel HyperSpeed. Round 2 of the HyperTri maintains its triathlon-specific features while improving others. The graphics have changed a bit, and the closed mesh upper is a stretchier mesh with no-sew overlays replacing the traditional toe construction. Sockless wear is no problem, and the included stretch laces make for speedy transitions, though a traditional lacing option is also available. The midsole continues with its bouncy, cushioned feel but additional drainage ports have been added (discretely), so they’re there if required. The outersole is similar to its debut version, but with a touch more forefoot coverage. Even so, the shoe nets out at a few fractions of an ounce lighter. The HyperTri 2’s fit, ride, and versatility make it an excellent choice for one event—especially if it’s the third one in a series. 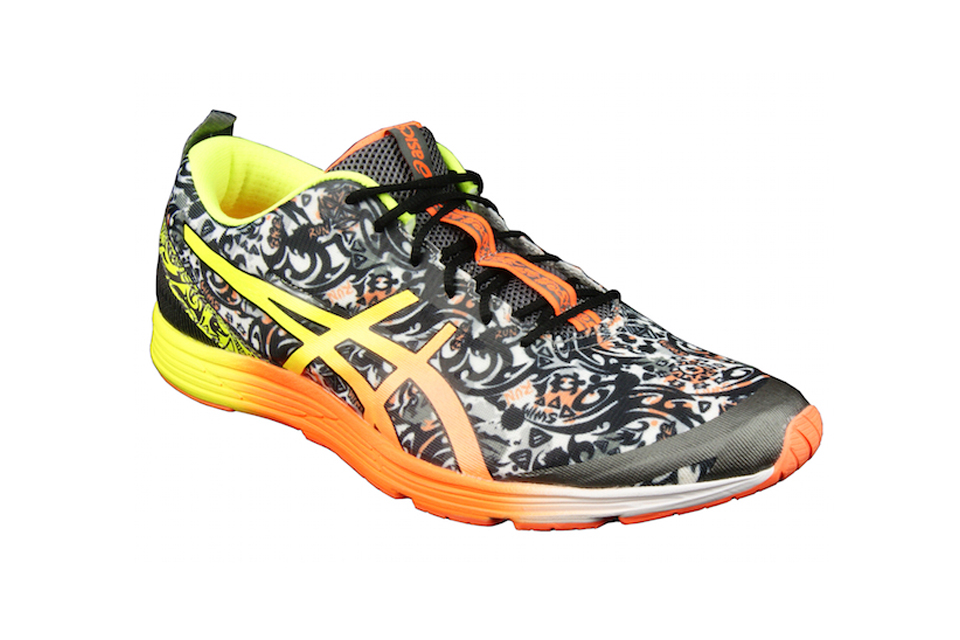 The 1400 was a right-place, right-time shoe that effectively defined a new profile for New Balance. Round 4 offers some incremental improvements, while maintaining its many strengths. The upper is closed mesh with welded overlays, sporting brightly colored, sublimated graphics. You can’t miss it. The support is better than Round 3 thanks to the revamped forefoot overlays that extend to the bottom of the lace throat. The midsole has the requisite changes to the molding, but continues to feature the effective cushioning and resiliently snappy ride the shoe is known for. The new 10-millimeter drop is better suited to a variety of runners, requiring little adaptation to its low profile. The redesigned outersole has a slightly better combination of traction and durability, plus a little more flexibility in the sole unit. The 1400 v4 solidifies its heritage of performance, versatility, and value.

The Hitogami has become one of Mizuno’s most versatile racing shoes, splitting the difference between an ultralight training shoe and a really good racing shoe. The upper employs a semi-open, nonstretch mesh, with good support and a sleek-looking, sublimated design. The already-spare traditional toe and lace throat overlays of Round 2 have been pared back a bit and softened. As is often the case with Mizuno’s most effective shoes, the midsole continues with the low-profile chassis from Round 1 on the strength of its protection and good response. The outersole continues, its durable traction at home on the roads as well as on smooth, natural surfaces. The bottom line is that the Hitogami 3 is lighter, but with the same performance that the shoe’s fans have come to expect.

The Pearl Izumi E-Motion line has inched forward with minor changes to its shoes—a testament to its solid reputation. The EM Road N0 v2 (version 2 of the Neutral zero-drop racer) is a racer/trainer reserved for your fastest running. The upper is small minimesh supported by no-sew overlays pared down a bit from Round 1 to save weight. A saddle-like framework snugs the foot gently, but effectively. The midsole features the same zero-drop geometry as the original, but with a healthy chunk of foam underfoot (though it’s still low to the ground). The outersole is a slightly trimmed-down version of Round 1’s, saving weight without noticeably affecting traction or durability. The result is a reliable racer that can manage fast running, whether it’s in speed sessions or on race day.

For the past decade and through six updates, the Type A has epitomized Saucony racing. This version, while not entirely new, is a numerical reset. The upper sticks with yet another closed mesh, though it has a breathable, cross-hatched pattern that’s pretty supportive on its own. Flexfilm overlays from mid- to rearfoot keep the foot well-secured. The toecap keeps the fabric off the toes effectively, yet unobtrusively, allowing great flexibility in the process. Open mesh linings work well for sockless use and drain effectively in warm or wet conditions. The midsole is unchanged: 4-millimeter geometry and low-profile stack height. The ride is responsive, with decent protection. The outersole retains two excellent compounds: proven XT-900 rubber in the heel and iBR+ injected blown rubber in the forefoot. What impresses most about the Type A in this round is the continued attention to detail, protection, and performance—all for the same price.

Each version of the GOMeb Speed coincided with an impressive exploit by its namesake, and that continues as Meb Keflezighi earned a spot on the 2016 U.S. Olympic team. The Speed 3 2016 features a new upper and midsole foam, either one of which might be called a major upgrade. The upper is a new, knitted design that flexes well with the foot, yet holds it securely. The interplay of contrasting colors in its knitted design adds noticeable visual appeal. The fit is both roomy enough and snug enough to secure the foot effectively, thanks to its stretchy nature. The midsole features a new foam formulation that has a livelier feel to it. The midsole tooling remains the same as does the embedded plate, adding its responsive and stabilizing feel. The outersole is also as before: just a few dots of carbon rubber, the remainder toughened foam. The versatility of the GOMeb Speed is improved in the 2016 version: better protection, more responsiveness, and after all, who doesn’t want to be like Meb?

The Climb is Worth the Journey