Throughout Austin, the city’s heroes are easily identifiable. Instead of capes and shields, though, they are bolstered by badges and patches, helmets and holsters. They are the city’s first responders.

For the men and women serving the Austin Police Department, Austin Fire Department, and Austin-Travis County EMS, their daily pressures are profound and largely out of the realm of understanding for the general public. That’s just how they want it, too; service is a sacrifice that isn’t to be seen or heard.

Austin Fit Magazine takes an appreciative look at the fitness culture among first response teams, and how it enables each to work heroically.

Fit to Save and Survive

The servant’s mentality of sacrifice and honor is embodied by the hustling image of an ax-bearing, hose-dragging firefighter. As the bell rings to signal danger and disaster, when everyone else is running out, firefighters go rushing in.

Because of the physical nature of their work—the laborious tools, bulky turnout gear—and chaotic reality of battling blazes, fitness is a job requirement for firefighters. “Just like athletes who must perform and execute at a high level, fitness is everything to us so that we can respond when needed,” said Coitt Kessler, a 14-year Austin Fire Department veteran.

AFD goes beyond the requirement to actively prioritize and promote overall health and well-being among its company of nearly 1,100. Austin was one of ten major city departments to work with fire chiefs and unions during the formation of the Wellness-Fitness Initiative in the mid-1990s. The program provides an annual medical and fitness evaluation, plus injury rehabilitation resources and behavioral health support.

“Our goal is to have fit firefighters,” assistant fire chief Tom Dodds said. “That’s what the public demands.”

Jill Craig, AFD’s fitness program coordinator, oversees the annual assessments, which test cardio capacity, flexibility, muscle strength, and endurance. These results, coupled with the outcome of the medical examination, are reviewed by department doctors. “It’s the blend of both that is important,” Craig said. “Our goal is to keep people working longer, and keep them on the truck. This really gives them a check, kind of holds up a mirror for them.”

AFD’s success with the wellness-fitness initiative has come through its willingness to actually impact firefighters at their stations. Instead of offering voluntary fitness seminars or recommendations, AFD fully outfits all stations with equipment, including Olympic lifting platforms and kettlebells, and also provides peer fitness trainers to demonstrate proper form and movement.

Not so long ago, cigarette smoke and sausage gravy were everyday norms at firehouses. Today, however, an hour of exercise is required every shift. The cultural change toward outright fitness has been a slow-moving labor of love with advocates like Kessler leading the way. He was an AFD rookie in September 2001, when New York City’s twin towers crashed, and the ripple effect in Austin was the plan to cut the annual physicals in favor of budget appropriations elsewhere.

“I was bothered that such a great benefit was going to get axed for budget,” Kessler said. “I started going station to station. A lot of folks thought this was very important, and we started to gain some traction.”

Kessler chaired the wellness-fitness committee as part of the local fire union, and also reached out to collect data from other city fire department’s wellness programs. In New York, for instance, after the Sept. 11 tragedy, many firefighters became sick, but baseline assessments obtained through annual wellness screenings allowed the city to determine who became sick on the job and who did not.

“Our department leaders wanted this the entire time,” Kessler said. “We just needed an agreement with the local labor organization…the financial side gave us that window. There’s a financial benefit to maintaining healthy firefighters, and then managing on-job injuries and rehabbing them to get them back to work.”

Kelly Kidd, a 30-year career firefighter, spent the past year rebuilding his body after a fight with a guardrail took out both of his shoulders—necessary tools for the roof-pulling, hole-cutting duties of Kidd’s apparatus truck work. But even through his injury, Kidd never went “off duty.” Instead, his job was to arrive at AFD’s wellness center every day and go through physical therapy exercises.

Now, Kidd is lighter, healthier, and fit for service. “This is the best I’ve ever felt,” Kidd said. “This (wellness center), it’s a benefit.”

Fit to Protect and Serve

Jason Wolf, who just ten minutes prior was sweat-stained and short of breath from finishing his own workout, now stands inside a pull-up cage, surrounded by the laser-locked gazes and rigid torsos of the Austin Police Department cadet class. For the next few minutes, Wolf discusses the particulars of technique that help the body launch upward and over the pull-up bar. No detail goes unnoticed, right down to wrapping the thumbs or using a monkey-paw grip.

A little later, as the cadets complete their prescribed workout with seven minutes of continuous wall balls and burpees, Wolf is eyeing a different detail. The cadets are paired together, and as one exercises, the partner counts. Sometimes that means not counting. “No reps” are the result of improper form or execution.

“It’s teaching accountability and building verbal judo skills,” said Wolf, one of the lead cadet fitness instructors. “We want to make them effective communicators. If they can’t call out their peers in a setting like this, why would they be able to do it on the street, in an active situation?”

Every moment presents a teaching moment for APD and its officers-in-training. Cadets progress through the academy in a rigor of eight-hour days structured around a curriculum that emphasizes penal code and marksmanship with equal value. Fitness and overall wellness have a place too, as each day concludes with an hour of physical conditioning.

In the line of duty, fitness and strength translate to control—control over breath and heart rate, over emotions in extreme conditions, and over the outcome of any confrontation.
“We want them to be fit to fight. They need the strength and the stamina to deal with any situation they might encounter,” said Sgt. Zac Pruett, who oversees this training class.

The goal of physical training in the academy is to create well-rounded officers through a variety of workouts and education in proper nutrition planning. Upon graduation, the young officers will be released to patrol, often pulling late-night or overnight shifts. The nocturnal schedule, coupled with the acute stress of hyperawareness, can put officers in a cycle of going to work, getting off work, sleeping, and then waking up just in time to get back on duty.

In order to protect the public with stoic poise, Austin police officers work to continue the fitness foundation laid during cadet training throughout entire careers. Although physical fitness tests are required to earn admission into the academy and to advance through it, APD does not require fitness assessments among its active duty officers. Yet, each substation has a fully equipped gym, and pockets of fitness have sprouted throughout the force. APD has a running team, cycling team, and weekly workout warriors.

Assistant Chief Jessica Robledo leads a weekday morning group that sweats together at the City of Austin’s Rutherford campus in northeast Austin. Before writing that day’s workout on a dry erase board, Robledo explained, “I’m just figuring out how I’m going to kill us.” Her solution was a gasser of wall push-ups, planks, sumo squats, dips, and wall sits.

Among the morning regulars—a blended group of detectives, patrol officers, and everything in between—there’s a feeling of community rather than competition.

“I enjoy this group of folks. You feel like you have someone to hold you accountable, but you’re not being judged,” said Alex Parker, a civilian city employee who works out with Robledo’s class. “You have someone supporting you. Two weeks ago, I ran my first mile, and if it wasn’t for them, I would have never even known I could do it.” 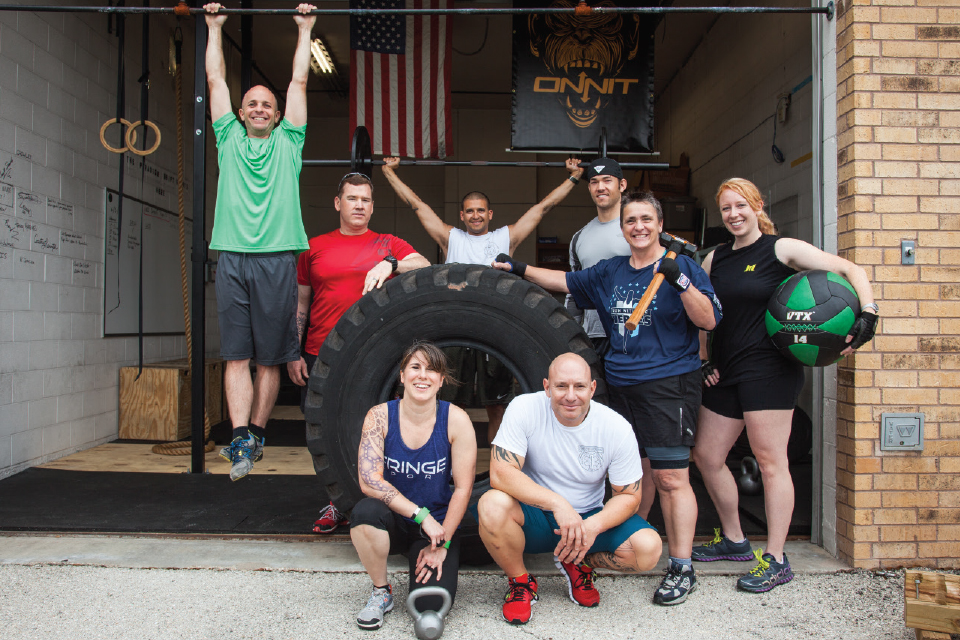 Founder Walt Settlemyre says “The Yard” has “become a place where you can come and help stem the tide of the toll our job takes on our bodies, minds, and spirit.”

On the surface, this is just another CrossFit box. Mostly bare, save for the pooling sweat droplets on the floor, and the stacked plyometric boxes and free weights, the space is reserved for body movement, adrenaline, and endorphins.

But step away, and the uniqueness of this workout space is revealed. It actually exists behind an Austin fire station, in a vacated engine bay. This is where the tireless crews of emergency medical technicians and paramedics of Austin-Travis County EMS stay fit.

They call it, affectionately, “The Yard,” and its ethos is stenciled in black block lettering on the walls and various equipment. “The paradigm shift starts here,” it reads.

“This is stressful work,” said Walt Settlemyre, who works on the ATC EMS Special Ops box. “A few years ago, it was affecting me. Bad attitude and generally bad health. Eventually, I just got fed up with myself and knew I needed to make a change. That came with prioritizing health and fitness.”

Settlemyre started a grassroots effort to promote wellness among the 480 employees of ATC EMS. He found communal space in the city to stage group workouts and began advocating through the administration for funding and equipment. The Yard is now CrossFit affiliated, with the workouts organized by EMS crewmembers who are also CrossFit certified coaches.

ATC EMS serves all of Travis County, and parts of Williamson and Hays Counties, through 32 full-time ambulances and four peak load units. All vehicles are equipped to provide Advanced Life Support care and are staffed with at least two paramedics. Essentially every 911 call for medical help dispatches an ambulance. It’s busy, energy-draining work. Some units are called out at the beginning of a shift and don’t return to the station until the end of the shift 12 hours later.
“Not every call involves critical or life-threatening emergencies,” said Terésa Gardner, assistant chief over employee development and wellness. “But that doesn’t mean our assistance can be anything less than top.”

Because of the rigors of the work, and in many cases the harsh reality of the response calls, Settlemyre says poor health and depression are side effects for EMTs and paramedics. Through his own journey, Settlemyre gained mental clarity and improved attitude with diet and exercise. He sees it as his personal mission to bring the good news to more people. Gardner credits Settlemyre’s passion for sparking the fitness provision, which continues to grow. Since ambulances are stationed with and work in connection with Austin Fire Department, ATC EMS will likely soon be folded into the fire department’s annual wellness-fitness screenings, city officials said.

“Seeing people, and treating people, at their worst takes a toll, physically and mentally,” Gardner said. “Fitness helps to overcome that.”