The Pain of Competition 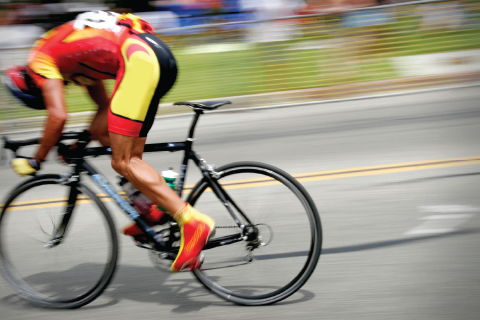 It never ceases to amaze me how much it hurts to race. I feel like a broken record at every finish line because, when my parents ask how it felt, my first answer always seems to be, “Wow; that hurt.” We athletes often push ourselves in training, but we can take ourselves to the next level through pain and suffering in competition. Each time I dig deep in a race, I learn I can hurt more and for longer than I had previously believed. While our bodies physically suffer, it’s our minds that tend to break first. Learning to accept, manage, and embrace the pain of racing can help take you to your next level.

People sometimes say to me that racing must become easier as I’ve gotten faster. The truth, in fact, is the exact opposite. As I’ve progressed, I’ve learned to suffer more intensely and for a longer time. I’ve also learned to manage this discomfort by teaching myself mind tricks to get through to the end. Racing hurts much more now than it did when I first started triathlon. In those days, I would back off so that I was merely uncomfortable and not hurting. Now it’s a different story. With years of experience in continuing to push beyond my comfort zone, I can better manage the pain of competition. To gain the edge in competition, I’ve had to learn to bear the next level of pain because an elite endurance athlete must learn to dig deeper and hurt worse than anyone else.

I was working at an Ironman event as a broadcast announcer and we were interviewing the professional triathletes the day before the race. A Belgian professional triathlete, the current world record holder for the fastest Ironman-distance race, came in for his pre-race interview. When we asked him his expectations, he didn’t reply with a canned answer. He simply replied, “I came here to hurt and to be hurt.” That short statement summed up what it means to compete at the highest level. Professionals know that they will have to suffer like none other all the way to the finish line in order to be successful.

I’ll often hear people in causal conversation voice that their next race is for “participation” rather than “racing.” This is a great mindset as long as your goal is to have fun and improvement is not a high priority. However, if physical development, dropping race times, and improving placement at a race are your goals, this mindset won’t get you there.

During every race, I’m always in some degree of pain, and the closer to the finish I am, the more it hurts. It’s easy to let your mind get the better of you; the human brain causes us to pull back from intense effort as a defense mechanism. It’s easy to think that the other competitors aren’t hurting as bad or that you’re the only one suffering. I always try to use that knowledge to dig deeper and make an attempt to look as if I’m not hurting. If my competition thinks I’m not suffering, this can sometimes play against them. I’ve also learned to try to stay on top of my mind, using disassociation and visualization techniques to separate myself from my thoughts and feelings. This is much easier said than done but, the more I’ve learned to manage my thoughts, the longer I can continue to sustain that intensity.

I won’t lie. As much as I’d like to preach that the spirit of competition and inner drive are my only motivators in races, the truth is that I’ve also used money as a driver during tough times. Triathlon is my profession and career, and it’s no secret that it’s not terribly lucrative. I’m not living high on the hog. So when the chips are down in a race and I’m fighting for a position, I’ll use the motivation of money and financial survival as a way to keep myself digging. At a recent half Ironman-distance race, I was hurting badly with two miles to go. The next competitor was about 20 seconds behind me, and he was gaining quickly. I asked myself, “How bad can I hurt for two miles for $500?” (the difference in the prize money between our two positions). I pictured someone dangling that money in front of me and I dug deep, pulling away from that racer. He and I spoke after the race, and he said he thought he’d “had my number” but, with two miles to go, I’d put in a surge that broke his spirits and he’d lost me.

Most importantly, I’ve learned that no matter how much racing hurts, the pain stops as soon as I cross the finish line and the joy of success unquestionably outweighs everything I’ve endured. I always have to remind myself of this fact because it’s easy to forget in the heat of the race. Any pain of competition is much easier to endure than the feeling of regret that sets in on a day when I feel I could have gone harder. And so I find there is wisdom in the proverbial marathon and triathlon t-shirts seen at race expos, stating that “pain is temporary, glory is forever.”