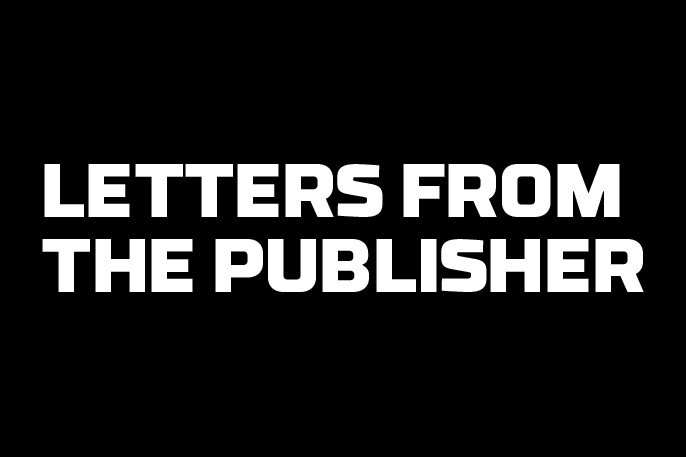 In our quest for the good life, leisure activity represents an important goal for many Americans. The very word leisure is defined as “easy,” “slow” and “laid-back.” Unfortunately, increased opportunities for leisure and poor nutrition have contributed greatly to America’s unprecedented rates of obesity and new and disturbing health challenges like childhood diabetes.

The societal inertia driving unhealthy lifestyles is overwhelming for many, and the challenge of combating this reality is daunting.

But a growing number of champions out there succeed in overcoming these obstacles. They serve as an inspiration to others looking for examples to help them change their lives. At AFM, we are especially proud this month to shine a light on just a few of these brave souls in the sincere hope that it will encourage others to “go for it” and be part of a growing movement of advocates for health.

To kick this issue off, I ask that you indulge me and allow me to tell a personal story of courage close to home. This is a story about my daughter, Janie. Janie was a very bright child, participating in “Edge” classes, a select group of students with high academic achievements, in her elementary and middle school years. She excelled in theater and was very gregarious. Although not particularly physical, she always tried hard and even played varsity golf in high school. But in her early teens, Lynne and I felt something was not quite right. She was small for her age and seemed to be a “late bloomer” in many ways.

Nonetheless, Janie graduated from Miami of Ohio with a BA in literature and moved from Ohio to Austin to begin her adult life. Austin was just the ticket for Janie, and life was good. Until one day, then in her mid 20’s, coming home from a party, she stumbled on a curb and fell to the ground. She was fine, but when questioned, said she couldn’t see well at night. An initial misdiagnosis and several doctors later, Janie was determined to have Kearnes Sayre Syndrome, a rare and incurable, degenerative Mitochondrial Myopathy that attacks many of the body’s systems.

Over the next several years, as Janie’s condition deteriorated, she became more and more depressed, gained a great deal of weight and generally lost interest in living.

Now 32, Janie is legally blind and has limited physical capacity compared to normal folks. Her maximum wattage output as measured during one of her clinical trials was only 80 watts. But none of that is going to stop her now. Eight months ago she decided to take control of her life and her future and since then everything has changed. Here is her story. 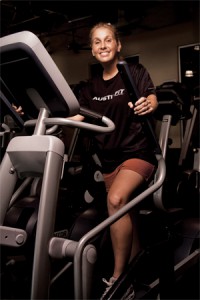 As I look back at myself 8 months ago, I didn’t believe that I was overweight. I’m about 5’ 6” and weighed 170 pounds. To be quite honest I was lazy, sad and the only thing that brought me true comfort was food. I had made promise after promise about changing my life before, but I just didn’t seem to be able to do it. I would start and then get distracted or find some excuse for eating and not telling my parents. Because my disease affects my energy level I sleep a lot and I used this as an excuse for not exercising and to escape from my depression. But the scale doesn’t lie, and I couldn’t cover up my lack of effort.

I really don’t know what finally changed my commitment, but I think it was after yet another tearful discussion with my parents that I realized that only I could resurrect my life and the time to do that was now, not tomorrow or the next day. And so I began.

I moved out to my parent’s ranch, where we worked together on my diet and portion control. My dad has a gym and we developed a work out regimen. I hated the stationary bike and the treadmill, so that only left the elliptical. (Gag!)  At first, I cried in frustration. But through a lot of tears and sweat, the elliptical is now my new best friend. I work out every day for an hour and am currently on resistance level 10. Kearnes Sayres is affecting my heart, so we watch my heart rate carefully. But I get up a good sweat and I know I’m getting stronger every day. When I first began this journey I couldn’t walk to the end of the driveway, but now I can go to the entrance gate and back, over 3 miles and I’m fine.

I have my days when I’m not in the best of moods, but then I think about the past and I never want to go back. Right now I’m down to 136 pounds and my goal is 125. I know that it’s definitely achievable and I can’t wait to get there. The thought of where I was going is really scary. I’m so thankful that I’m on this never-ending journey to be the best that I can be. It’s all due to the love and support of my family and friends. I couldn’t have gotten this far without them. They showed me the way and stuck by me. Now a healthy diet and physical activity are a way of life for me. They say, “no pain, no gain,” but maybe they should say “no gain, only pain.” I feel great about myself and I’m much happier as the thin Janie. I have a life again!