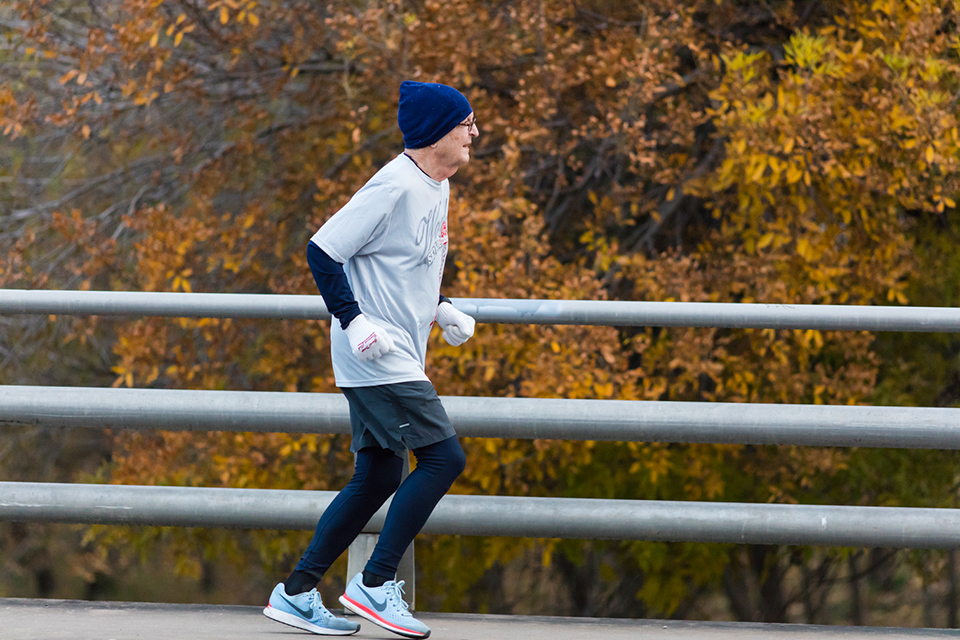 Phil Radford is proof you can train at any age. He runs three times a week with the Shoal Creek Striders at 86 years old and has also qualified for the 2019 Senior Olympic Games 5K in Albuquerque. We caught up with him to hear more about his training and what he’s hoping to accomplish.

When did you first start running?

When I turned 50 a good friend of mine was coaching the high school football team. He invited me to be a football coach and do the football workout, his son was the assistant coach and he was a runner. We got together and started running. I kept running and my buddy quit; I stuck with it, so it’s been about 36 years.

What’s it like being a part of the Shoal Creek Striders?

Well, I’m lucky I found them. I live in Austin Midtown in the apartments, and I was running in the parking lot — three or four trips around the parking lot was 2 miles, and I looked across the street and there was all these runners over there, and I asked if they were a running group and they said yes. So I asked them when they ran and they said, 6:30 a.m. Monday, Wednesday and Friday. And I said, ‘Well, I’ll be here tomorrow morning,’ and that’s how I met them.

I run about 3 miles a day, and The Striders will run 4 miles, I always run the short route. We have different routes, they have one 43 run, parks bridges run — they’re all made for the area we’re in. They’re all around 4 miles, but they always have a 3 mile stop. And I make up my own routes, too, and I get lost quite a bit.

What have been some of your biggest accomplishments over
the years?

I like to meet the people, I’ve always liked to meet people. That’s what I enjoy the most about running, when you’re running you can see the scenery and the camaraderie. Runners are special. We all have a thing we do, and we run together.

Tell us about your recent qualification for
the Senior Olympics.

I’ve qualified for it next year in Albuquerque. I’m not a fast runner, I’ve slowed way down, I’ll probably be fourth or fifth out of the eight places. It’s a big thing, I’ve been in eight senior games, this will be my ninth. My wife plays softball for the senior softball team. I ran in Birmingham last year in Alabama, and I thought that would be my last one. But every year you have that competitive spirit, and you want to go again. I hope I’ll be running when I’m 90. I had a friend run at 89. I hope I end up like him.

I’ve run in Nike Pegasus shoes ever since I’ve been running. I’ve tried a couple others, but they didn’t feel good. That’s the only thing I use. The rest of it is just common clothes, just a pair of shorts and a T-shirt. I always buy two pair of shoes, so I’m always ready to run and never run out of shoes.

Advice for people trying to get into the running world?

Just like the old Nike saying, “Just Do It.” You might walk, well, you will walk and run, and walk and run and then you’re just running. And all of a sudden you’re in your old age and you say, ‘well, I’m gonna quit,’ but you just go back to walking and running again and stay healthy. I take no medication, I’m not on anything. Neither is my wife, so it must be working.