What Inspires Your Swimming? 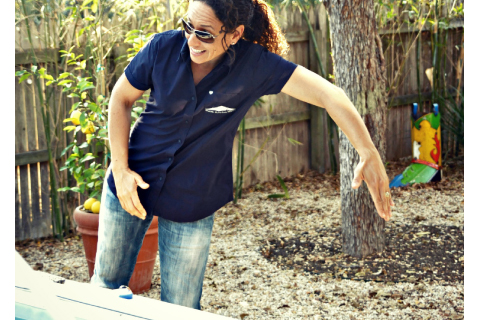 What inspires your swimming?  I am not referring to why you do it, but rather how you do it.

How do you define your stroke, visualize it, and imagine it?  One group of my collegiate swimmers at Auburn often had fun playing a game at the end of a workout where they would mimic one another and then try to guess who each was imitating.  It amazed me how adept they were at transforming their movements into someone else’s stroke. I’ll admit that, on the occasional workout, I would try to “be” Kirsty or Maggie, both World champions in the IM (a BIG stretch on my part).

Visualization is an amazing tool for learning a new skill, one that has been found to be extremely successful by not just athletes, but also musicians, actors, and even executives. In general, visualizing puts you in a positive and confident state of mind and readies your nervous system for performance. Studies have found that during focused visualization, neural pathways are formed and habits are built.

Alan Richardson, one of the first scientists to publish papers regarding effective visualization, stated that, in order to be most effective, the visualizer should both feel and see what he or she is doing. In his experiment with free throw shots in basketball, the subjects who were most successful “felt” the ball in their hands and “heard” it bounce in addition to “seeing” it go through the hoop.

One of the inherent problems with swimming is that you rarely get to see others’ stroke mechanics, much less your own.  I highly advocate videotaping as a way of getting an honest look at how you move through the water; you might be surprised. One of the things my clients appreciate the most is that they get to see EACH stroke they take, either in the mirrors in the pool or via the videotaping we do, as well as look at video of how a “pro” does it… and then they begin to mimic. It is amazing to watch my swimmers self-correct simply because they can see what they are (or are supposed to be) doing.

Seeing your own mechanics and watching proper technique examples are by far the best ways to begin to make improvements.  But don’t fret if you don’t have access to mirrors or video footage; just take the time to find something that inspires you in the water and play that image repeatedly in your mind’s eye. Need some help?  Here are some useful images to call upon:

Dolphins: graceful, strong, and streamlined animals, full of joy and life as they navigate their element. You never get the sense they are working…they are playing!

Sailfish: the fastest fish in the ocean! Clocked at a maximum speed of 68 mph, sailfish make Florent Manaudou (France; winner of the 2012 Olympic gold medal in the 50 free) look like a snail at 5.25 mph.

Barracuda: with their torpedo-like torso, barracuda move through water quickly yet without much effort. I’ve heard a number of world-class coaches refer to my most decorated athlete, Kirsty Coventry, as looking like a barracuda!

SUP: if you are a swimmer and haven’t tried Stand-Up Paddleboarding yet, you need to get down to Lady Bird Lake, stat! Visualizing your stroke as if you’re paddleboarding is the most effective imagery.  Why? A paddleboarder puts the blade in the water as an anchor and then uses his or her core to pull the board past the paddle. I think one of the biggest mistakes inexperienced swimmers make is holding onto the idea that they merely “pull” the water past them with their hands. Au contraire! The most effective swimmers in all four strokes set “anchors” just like that SUP blade.  These anchors are made up of their hands and forearms, as they then engage their abs and hips to move their bodies past that anchor. This anchor is also referred to as “the catch” in a swim stroke.

In a good catch, the swimmer’s fingertips are pointed downward, the elbow is high, and the hand and forearm act as a blade, holding pressure on the water throughout the pulling cycle. Sculling drills are great ways to practice getting into and holding this position.

In addition to practicing sculling drills, swimmers can also utilize paddles to work on their catch.  I suggest starting with small ones first and building up in size.  Use only the finger strap (no wrist strap) so that you are forced to keep pressure on the water with your hand, in order to avoid letting the top of the paddle catch water and fall off.

It is so important and valuable to have positive images to mimic as you both drill and train your stroke. Regularly utilizing visualization to improve your stroke technique in practice will transfer into actuality while racing, as those good practices will become second nature.

So go ahead and think BIG in order to start transforming your stroke into something that inspires you!

It’s No Waltz Across Texas