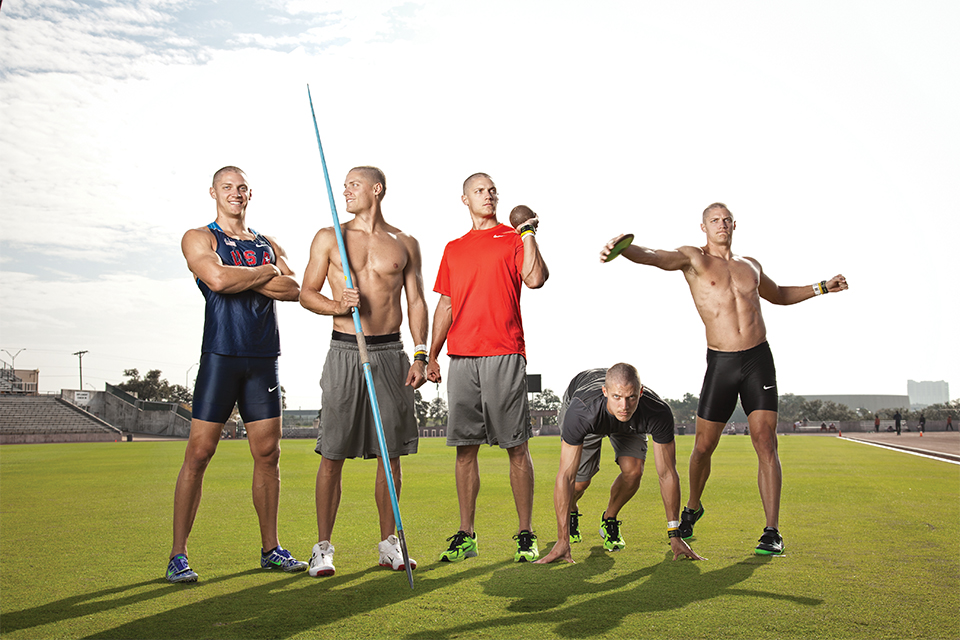 The feelings of disappointment and disbelief were all-consuming for Trey Hardee as he walked away from the pole vault pit at the 2008 Beijing Olympic Games. Going into the event, the 24-year-old was in fourth place overall and in prime position to snag a medal on track and field’s grandest of stages. Hardee had been recruited out of high school to collegiate pole vaulting after a stellar high school career in Birmingham, Alabama. He had spent the better part of a decade honing his craft and not clearing the opening height in competition had been inconceivable. But on that day in Beijing, the former University of Texas national champion’s dreams of Olympic glory ended in the cruelest of ways as he failed to make it over the cross beam.“As soon as I walked off the pit, it was like I woke up,” Hardee said. “I kept asking myself if that really just happened. It wasn’t shock or disbelief, but sobering.”The tallest person in his family by six inches, Hardee doesn’t have bloodlines that trace any type of rich athletic history. He gets his extended torso from his father and long, muscular legs from his mother. Put those two together and you have a world-class athlete standing 6 foot 5 inches with a chiseled, sinewy physique built to withstand the rigors of the decathlon.

Hardee signed to pole vault for Mississippi State out of high school – a member of the Southeastern Conference and located just a few hours down the road from his home. Noticing the raw talent he possessed, it wasn’t long before his coach convinced him to give the decathlon a try. Comprised of ten events spread out over two days, the decathlon is arguably the most difficult and grueling test of both physical and mental strength.

“Physically the recovery time takes about 10 to 14 days before you’re back to feeling normal, but mentally you’re exhausted for up to three weeks,” said Hardee. “I think it’s comparable to what someone feels after racing an ultramarathon.”

Despite not having competed in anything but the pole vault since his early years of high school, Hardee excelled in the decathlon from the very beginning. In his first collegiate outdoor competition, the freshman qualified for the NCAA Championships – something most of his peers at the time spent four years attempting to accomplish. It was a fortuitous sign of success to come, and during his two seasons at Mississippi State he racked up an SEC Championship and two NCAA Outdoor Championship top-five finishes.

In the summer of 2004, with the track program having been scaled back due to budget cuts coupled with his coach moving on to another school, Hardee explored his options outside of Starkville, Mississippi. One visit to The University of Texas was all it took for him “to see the light,” as he describes it, and he’s been in Austin ever since.

As a Longhorn, Hardee’s career scaled new heights, culminating with a collegiate record 8,465 points at the 2006 Texas Relays. “The facilities are the best in the country, the coaching staff is the best in the country,” he said, reflecting on his time at UT. “This was the best place to pursue the Olympic dream and make it on the world stage.” It’s little wonder that Hardee remained in Austin after graduating to see through the goal of becoming an Olympian. Fewer than six years after being coerced into expanding outside his comfort zone of the pole vault, Hardee was on his way to Beijing to represent the United States.

The decathlon first appeared in the Olympics in 1904 but has ties that go back to the sixth century Greeks. Past American greats include Jim Thorpe, Bruce Jenner, and Dan O’Brien. Today the event is arguably at its strongest and most competitive state ever. Hardee’s top two foes – Ashton Eaton and Bryan Clay – hail from the United States. Clay is a two-time Olympic medalist and Eaton – just 23 years old – has notched an NCAA Championship and finished second at the 2011 World Championships. There’s a high probability that the three could be atop the final standings in London next year barring any injuries. This feat would mark the first time in Olympic history for the United States to sweep the men’s decathlon medals, further engraving Hardee’s status as one of the all-time greats.

“The sport is at an all-time high regarding the level of competition between Eaton, Clay, and Hardee,” according to former professional decathlete and Austin-based sports chiropractor Ross Bomben. “Those three are at a completely different level than anyone else in the field and competing against one another brings out a caliber and depth of ability not seen before in our sport.”

For now, Hardee is focusing on recovering from the Ulnar Collateral Ligament (UCL) reconstruction procedure (also known as Tommy John surgery), which was performed on his right elbow in September. While competing at the World Championships in Daegu, Korea, in August Hardee tore his UCL throwing the javelin. “It was probably the best throw of my life. I hit a perfect position and honestly I don’t think I’ve ever been in that position before which is probably what caused it to pop,” he vividly recalled from that day. Despite the injury and the intense pain, all Hardee had to do to wrap up his second consecutive World Championship title was complete the 1,500 meter run – the last and final discipline of the decathlon. Just shy of a mile, it’s the event he considers the hardest of the ten.

“Honestly, it’s the most simple of events but because it’s at the end it’s the most challenging,” Hardee said. “You’re mentally and emotionally and physically almost at zero, and you know you have to empty the tank one more time to finish.” With his arm heavily wrapped to minimize the pain from his elbow, Hardee turned in his best time of the season (4:45.68) to become just the second American male to win multiple decathlon World Championships.

It was a no-brainer for Hardee to decide who would cut into his arm after returning home. As fate would have it, Hardee’s mother works in the same hospital in Alabama as world-renowned surgeon Dr. James Andrews. The list of Andrews’s former clients reads more like a sports Hall of Fame than a regular patient docket. Having worked on Michael Jordan, Albert Pujols, Tom Brady, Brett Favre, and scores of other athletes ranging from football to basketball to wrestling, Andrews’s meticulous surgical hands have proven to give a professional athlete the best chance at recovery and a good outcome.

Thus far, all signs of post-surgery recovery point to a speedy return to competition for Hardee. “He came out of the surgery telling me that’s how every Tommy John should be performed,” Hardee said. “[Dr. Andrews] said the surgery went perfectly.” That was comforting news to Hardee, coming off one of the biggest wins in his young career with an opportunity to deliver a different storyline in his next visit to the Olympics.

In terms of the potential length of his career, Hardee said he plans to compete as long as his body allows. “I’ve done six years worth of decathlons. I think training-wise my body is still young, still functional, still in one piece.” Studies have proven that the majority of men don’t reach their athletic peak until the late 20s or early 30s, meaning two Olympic Games – or even three – are not out of the realm of possibility for Hardee. And whenever he does hang up his spikes, a bright future undoubtedly awaits him.

Regarding his post-competition days, “I’m still kind of searching,” Hardee said. “Whether it’s coaching or working in the sport somehow,” he mused. “It remains to be seen where I end up or what I’ll do, but I’ll let that be determined by the length and success of my career.”

If his first nine years are any indication of future success, Hardee is on his way to etching his name into the wall of greatest American Track and Field athletes of all time.

Your Fit Fido Can Still be in the Magazine!