Sitting on the lush, green edge of Lady Bird Lake in downtown Austin, Waller Creek Boathouse is the home to the Austin Rowing Club  — equipped with a full catalogue of rowing and water sport equipment, an indoor rowing studio, lockers, showers and a café. The newly established 2012 boathouse has everything a rookie or a pro might need to make the most of their time out on the water. But this club and boathouse means much more than just a great place to row to the Austin community.

The boathouse is managed by the Austin Rowing Club, who partners with the likes of Ro Fitness, Alta’s Café and Congress Avenue Kayaks to create the best outlet possible for water activity. Established in 1931, ARC has made efforts to work and grow with the Austin community over the years.

ARC is a 501(c)(3) nonprofit organization — the only rowing nonprofit in Austin — meaning they use the funds they raise for outreach programs across the city.

“When people rent equipment or the boathouse, that really allows us to underwrite our programming and do a significant amount of outreach to underserved communities,” says Kevin Reinis, ARC’s executive director. “We do a lot of work to make the outdoors as accessible to everyone as possible.”

The programs range in target ages and demographics. Many of their programs are created for kids — young people who may not even know about the opportunity for health and wellness that rowing provides.

“Along with introducing communities to rowing,” Reinis explains, “we provide scholarships and financial assistance to ensure there are no barriers for anyone that expressed interest.”

Some of these programs include partnerships with the YMCA for those wishing to continue water sports after swim lessons or the summer camps that provide a fun and new outlet for kids in the outdoors. There are both competitive and noncompetitive recreational programs for younger kids who want to get on the water. One program, RISE (Rowing in School Experience), is aimed at introducing the sport to middle schoolers.

“We try to get to them in sixth  grade for two major reasons,” Jim Ruddy, outreach director (a volunteer position) at Austin Rowing Club, explains. “One is, of course, so we don’t have to compete with athletic directors for athletes. And two, more importantly, because the sixth grade is typically the tipping point when a kid may start feeling unathletic.”

Ruddy explains that it’s around that age that a child starts to be aware of their own abilities and feel that effect either negatively or positively when it comes to enjoying recreational fitness. And since rowing isn’t a skill people are naturally inclined to have more or less of, the kids all start at an equal playing field, so to speak.

“A kid may not have the coordination or foot speed to succeed at the popular ball or running sports, and they may not get chosen for teams and think of themselves as unathletic,” Ruddy explains. “But you put them on a rowing machine and they’ll work just as hard, if not harder than the other kids.”

Ruddy and Reinis recall watching the way kids have expressed disinterest to rowing until they got on the machine or the boat and got the movement down. For some of them, it’s the first time they’ve experienced athletic success, and that changes everything they think they know about their own capabilities.

“When my son first started rowing, there was a noticeable difference in his demeanor on our rides back from the boathouse compared to the rides there,” Ruddy says, who started rowing about the same time as his son. “It really opened him up, and we bonded from those car rides.”

Reinis, whose children also started rowing after he joined the ARC, explains that there aren’t a lot of other sports, even team sports, that epitomize the principle of teamwork, and that introduction to the kids is just as valuable.

“You can be the fastest, strongest rower on the team,” Reinis says. “But if the rest of the rowers aren’t with you, you’re not going anywhere anytime soon.”

That idea of accessible fitness to all levels translates into their other outreach programs. For injured veterans and those with disabilities, they travel to them and provide tailored rowing machines for the individual’s needs. For example, there are machines that hook up to wheelchairs, and there are others that are modified for one-handed rowing.

“We work with the Veterans Administration, and twice a year we put on a fitness and health fair where they get to come down and experience rowing,” Ruddy says. “And we send machines and volunteers down to San Antonio to support the Valor Games SouthWest.”

Along with para-athlete teams and other veteran outlets, the adaptive equipment, coaching and assistance is all provided by the ARC. 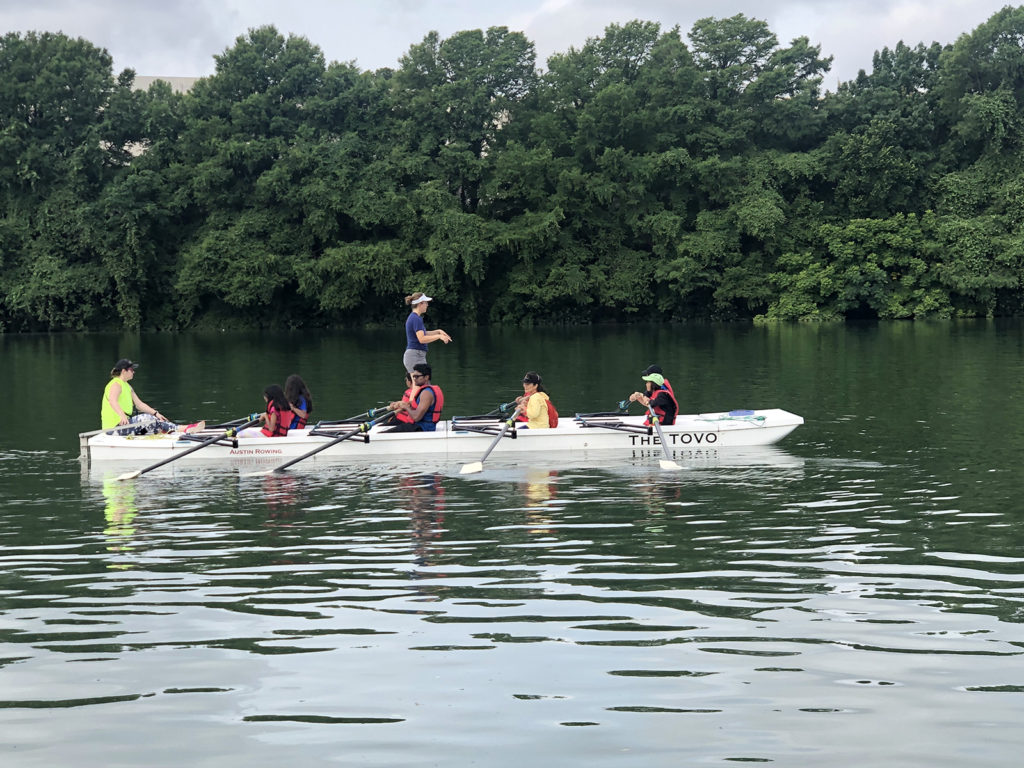 In order to make the funds for those and other programs, ARC holds and facilitates a wealth of events. Renting out the boathouse for dinner parties, weddings and corporate events year-round isn’t even half of it.

Last year’s SXSW, saw the space filled by Gwyneth Paltrow’s popular brand, Goop. For this coming SXSW, they’ve just signed and announced a contract with Scandinavian Airlines System. SAS will be putting on a Scandinavian House, meaning they use the location as a place for showcasing the Scandinavian culture, advancements and technology.

“This is something many countries and areas of countries do,” Reinis says, “and our boathouse will be the spot for some of their first big installations that they will then use in Tokyo 2020.”

The opportunities for competition and equipment rental that the club offers for rowers also contribute to both their funds and their fame. Lady Bird Lake is known as a good piece of water for many reasons, so teams from all over the nation, and now the world, come to practice on the never-frozen waters.

“With Lady Bird Lake, it’s ideal because the current is low, it’s sheltered from wind and is available year-round,” Reinis says. “So, you can really focus on power and technique during training.”

University teams from the likes of Wisconsin and A&M come annually to practice. Then, starting in late November 2019 through mid-December, the Chinese national team utilized the boathouse to train on the water to accompany the strength and power training they had been doing in San Marcos.

“It just doesn’t make sense logistically for teams like the Chinese national team to bring their own equipment,” Reinis says. “So, renting from us is a great deal for them and provides a lot of funds for our outreach.”

For out-of-town club members and rowers, the ARC also puts on three big races each year.

The Heart of Texas Regatta, also known as the HOT race, is the first one of the year. Held in early spring, the HOT race brings in a diverse set of competitors. Teams from 11 states traveled to Austin for the event this past year — partly because Austin itself is becoming an ideal vacation destination.

Following the HOT, in mid-April ARC hosts the Texas State Championships for youth — the state level for all youths in Texas. Masters (a category based on age, not skill level) and collegiate also attend, because rowing teams want to compete as much as possible.

The third event, the Head of the Colorado race, is held in the fall. It’s also known as the PumpkinHead race, because it typically falls around Halloween. Going on 36 years, the PumpkinHead Race is one of ARC’s oldest and longest-running traditions. 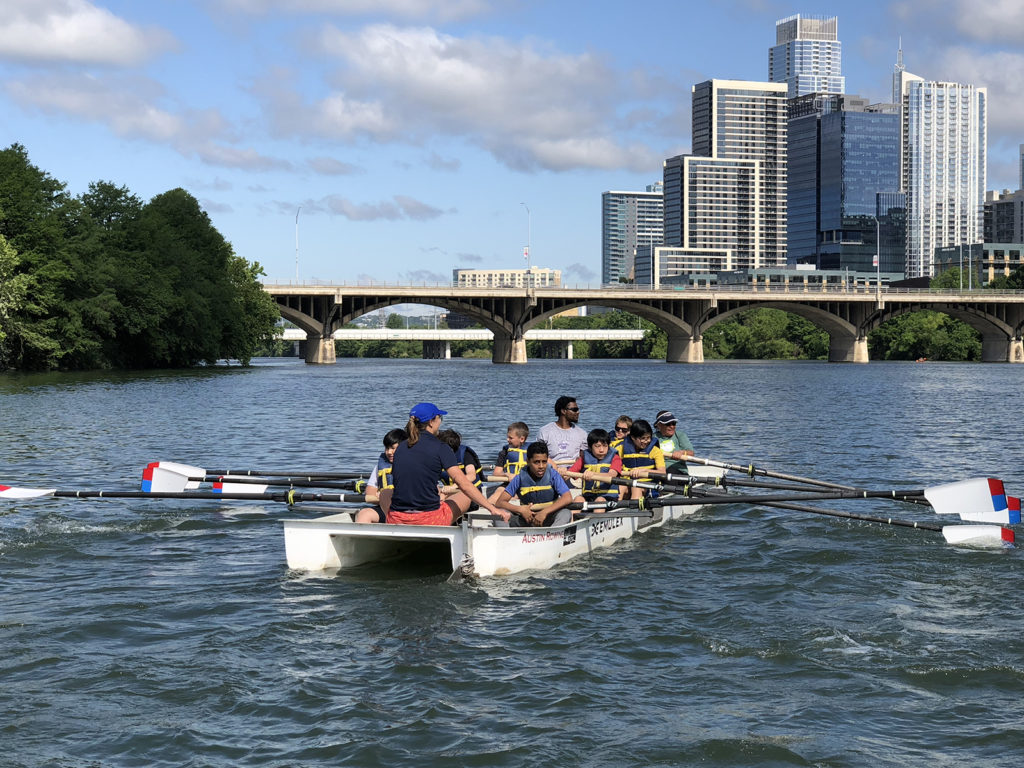 Overall, the mission of the ARC is to spread health and wellness — to teach people that there are other means to the healthy lifestyle they crave, no matter their age, ability or fitness level.

With 350 adult members, half of which are women and another large percentage being above the age of 50, with quite a few in their 70s and 80s, the ARC has a large and diverse membership.

“Rowing is a lifetime sport,” Reinis says. “It’s low- to no-impact, and the whole time you’re out on the water, taking in the beauty of Lady Bird. What more could you ask for?”