A Means for Change

RBI has a couple of different meanings, depending on the context you are using. In regards to baseball statistics, it means “runs batted in.” But if you are talking about the summer baseball league in east Austin, it stands for “Reviving Baseball in Inner Cities.”

RBI Austin hasn’t always been RBI Austin, though. It originated in 2009 as a summer team at Reagan High School when RBI Austin founders, Matt Price and Andy Harris, both former college baseball players, were asked to help out with the baseball team. The team had barely enough players and the field was unusable, but aftering finding out the boys weren’t playing summer ball, they decided to step in.

“We asked the guys where they played summer ball and they told us they weren’t,” Price recalls. “We said ‘You have to play summer ball. You’ll get even better,’ and then they said, ‘Well, coach, we don’t have anywhere to play.’ That was really one of the first dominoes that started.”

After praying about it, Harris and Price scrapped together a high school summer baseball team known as the East Austin Blazers. They had no particular or clear plan for what it would become other than giving the kids a place to play baseball for the summer, and trying to make somewhat of a difference in their lives.

“We went into with an idea of what it would be, but we really saw God move through those relationships,” Price says. “Hearing their stories was eye-opening, and I think God showed us that something as simple as a baseball team could fill some of those voids in their lives—we knew we needed to keep that going.”

Most of the Reagan players had absent fathers, or little parental involvement in general. Price and Harris offered rides to games and practices, which led to building deeper relationships with the kids. After seeing the need for positive influences in their lives, both Price and Harris felt called to continue the program, and even to begin reaching kids at a younger age.

“I think we were envisioning coaching a bunch of kids, hoping they would like it enough that we could do it again the next year, and they wouldn’t end up making bad choices in life,” Harris says. “Really, that was the bare minimum threshold of what we wanted, and obviously God had a lot more in store for it.”

RBI is a part of a larger nonprofit, For The City, a family of organizations, which they joined in 2010. It receives its funding from contributions from individual donors, foundations, and corporate sponsors, with the majority being individual donors.

“It was all very grassroots,” says Price, who left his job as a banker to start the organization fulltime. “I had no fundraising experience at all.” 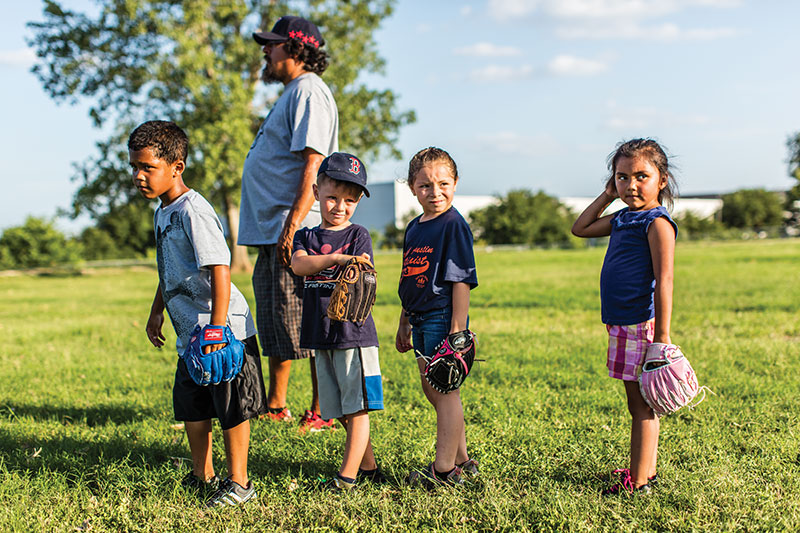 RBI reaches kids in the eastern crescent of Austin. Its mission and vision is driven by the gospel of Jesus Christ, providing opportunities for kids to develop spiritually by offering optional mentoring and discipleship programs. The league has grown from about 20 kids to 1,300 participants this summer, with roughly 400 volunteer coaches and mentors. It also now has seven full-time employees.

“I love getting to see kids who maybe didn’t have a chance, maybe haven’t played the game or any organized sport before, become young athletes,” says Casey Baeslack, a volunteer t-ball coach who has been with RBI since it was it first started as the East Austin Blazers. “I’ve seen so many rewarding things. I saw kids from their freshman year of high school graduate and go on to college. I was able to have relationships with them not just through being their coach, but leading them through Bible studies and being a mentor.”

For both Price and Harris, their intent for the program isn’t to develop athletes, but to invest in the lives of young people in order to see change in the community. It just so happens sports is the gateway.

“The concept of what we wanted to do is listen to the community and respond,” Harris says. “If the folks in east Austin, Manor, Del Valle, and so forth didn’t want this we’d find another way to pour into these kids' lives.”