Consider the notion that adding crickets to your diet just a few times a week could have a dramatic impact on our health and the environment.

Austin is at the forefront of progressive environmental and health initiatives. Walk around the downtown farmers market, and you will find a wide array of “conscious consumers.” Whether we tout the labels or not, you see this array of health sects everywhere you look. But whether you are a Paleo aficionado off to your next WOD or a vegan yogi practicing handstands at Zilker, aren't we really all searching for the same thing?

Many of us have adopted specific lifestyles and diets with the aim of feeling our best while also reducing our individual environmental impact. Unfortunately, putting different lifestyles into strict categories can do much more harm than good, polarizing the very people who care most about these important issues. We must choose to live in a way that makes most sense for ourselves—physiologically, morally, and spiritually. From the perspective of a conscious consumer, it’s crucial we start looking at other food sources for our macronutrients, especially protein. As the population continues to grow, we cannot continue to consume and waste as we have since the advent of modern agriculture.

Enter entomophagy, the practice of eating insects. Before you stop reading this article and go make your whey protein shake or kale smoothie, consider that many countries incorporate insects into their diets as your ancestors likely did. With a cricket farm now here in Austin, it is the most sustainable local protein source available.

Austin’s cricket farm, Aspire Food Group, has already made great strides in enacting change for their global mission. Cofounders Mohammed Ashour and Shobhita Soor were recently selected for Forbes’ “30 Under 30” list of the brightest young entrepreneurs. Ashour gives his expert opinion and advice regarding the push for implementation of crickets in a mainstream diet.

Keep reading for the interview with Mohammed Ashour and Shobhita Soor!

What inspired you to get involved in the entomophagy movement by starting a cricket farm?

What inspired us to get into insect farming in general was this idea of creating food security and ensuring stable access to nutritious and affordable food for a growing world. Depending on the statistics you look at, we are expecting a population surge by 2050. Our current production levels of livestock are simply not going to be a viable way to feed the growing planet. And certainly not without a lot of environmental consequences.

What are the feed requirements for raising crickets compared to those of larger animals?

It depends on what resources you use, but we use the traditional literature and what is published out in scientific reviewed literature. Soon enough, we will have data on our own farm so that we can report what our crickets are using, but for now we know that the feed conversion efficiency or ratio for crickets is around 1.5:1, which means it takes one and a half pounds of feed to produce one pound of cricket protein. And that’s a very impressive number when you compare it to beef, which is around 7:10:1. Even in the kindest scenario, you are talking about a very big difference in terms of feed requirements.

When we began to domesticate  animals for food and feed them a diet very different than what they ate in the wild, we saw their nutritional profile and overall health shift dramatically for the worse. Do you think cricket farming will have a similar effect?

I actually think the opposite. Crickets are nocturnal creatures that thrive in very condensed environments. So, if anything, what we are doing by farming them in enclosures, we are very much mimicking their natural habitat. “Free-range” crickets—if you will—are happy being farmed in bins because that represents a proximity to the habitat they are comfortable with. Secondly, we are able to control the food that the crickets are eating. We actually feed them exclusively organic USDA-certified feed. That’s important because a lot of crickets in the wild will unfortunately consume a lot of crops that have been sprayed with a ton of pesticides and all sorts of toxins.

Because crickets convert their food so efficiently, would feeding them things like soy affect their nutrition content?

How do you recommend people who have never incorporated insects into their diet start doing so?

There are a number of ways. Everyone these days is mesmerized by how to deliver more protein in their food, and I think some obvious ways are to incorporate it into shakes, like a teaspoon or tablespoon. We call it an “Aketta boost” (Aketta is the brand of the actual cricket flour). It's a booster because it provides a good source of energy and protein.

People who enjoy baked foods, whether it’s pancakes, waffles, bread, cookies, etc. can actually replace one part flour with a part Aketta and get the same texture without an overpowering flavor. Taking this approach substitutes a bunch of carbs and empty calories with a high-protein supplement.

And, finally, you can use it as a spice to add on top of any dishes and curries, and we’ve even thrown them on salads, which is a great way to dust on a great source of protein. And it has a nice savory sort of almondy texture, so it gives it a really cool flavor. 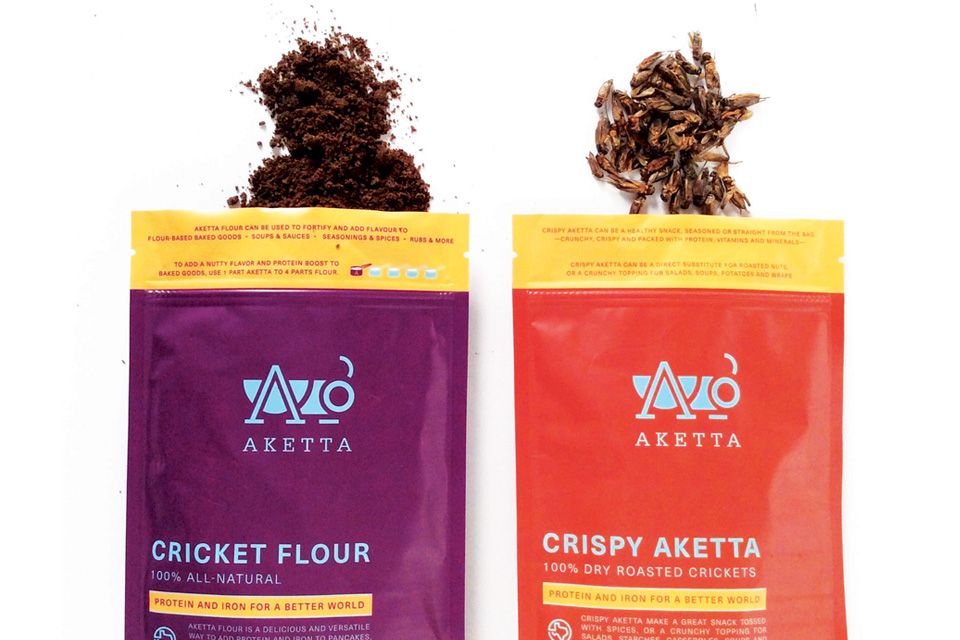 Do you think cricket protein is a good alternative to popular digestible protein supplements such as whey isolate?

The digestibility is both in your body's ability to absorb it but also the particle size itself and the distribution. So is it in liquid form or is it in food form? We are really keen to do this right in terms of the data. As someone who enjoys exercising and exercise nutrition, I am really off-put by the amount of products out there on the market making claims that are completely unsubstantiated and we don't want to fall into that trap. That's why I tend to be reluctant to make very grandiose claims about digestibility. We have done PDCASS (protein digestibility-corrected amino acid score), which is considered the gold standard for determining protein digestibility. So most people when they put protein on their products, there is no nuance there that lets you know how digestible and absorbable the protein is nor its bioavailability. And serving size is another point because your body can only process so much protein at a time, so it's great that you can get 50 grams of protein in a serving, but if your body is only really going to process 14 of that and the rest is going to be excreted, then it's really more of a selling gimmick than it is actually a genuine way to help people with exercise performance and things like that.

So we are really excited about its prospects for those types of markets, but we have to do a lot more studies to be comfortable comparing it to say whey isolate protein and to start going after those alternatives. Although, you know, what's interesting too is that, to some extent, you are also comparing apples to oranges because we are a dairy-free product and largely a soy-free product with no GMOs. So, in some sense, I don't think our goal is to disrupt or eliminate whey protein but to offer a protein similar to Vega protein, which is plant-based. There's a diversity of people out there, and what's interesting is that everyone's body responds differently to different products. So for some, using Aketta flour may actually deliver way better performance than whey protein and vice versa.

Do you think eating insects is a more ethical choice for those looking to minimize their environmental footprint?

I strongly believe that. The word "ethics" tends to evoke a sense of moral superiority, so I struggle to point necessarily to ethics. But certainly from an environmental and a society-conscious perspective, I think that it's a no-brainer. If I'm given a choice between a conventional source of livestock versus an insect for a source of protein, I would go with the latter and have a much clearer conscience. I would know that I'm not only getting the nutrients that I want, but in some cases, I'm actually getting better nutrients.

For example, we talk a lot about beef being a good source of protein which is great, but we don't talk a lot about the intense amount of cholesterol and low-density lipoproteins.  Whereas, with crickets you don't see a lot of the bad nutrients. Rather, you see a lot of the good nutrients and they essentially have the environmental impact of plants. So it sort of combines the best of both worlds.