Matthew Alford waddles to adjust his hip-width-distance stance before picking up his bow and placing his arrow into position. He draws his left arm and shoulder back. It is quiet. Too quiet. And then, in an instant, whumph-thud. His arrow hits the eye of the target 20 yards away.

Alford, 16, has been practicing archery at the Archery Training Center in South Austin for two years now. He’s about to enter his junior year of high school and has dreams of competing on a collegiate team (specifically, Texas A&M’s archery team) and in the Olympics, “the ultimate goal.” To get there, Alford practices three times a week with the center’s Olympic Path Training (OPT) program.

Alex Meyer, 34, has run the OPT program for four years and has been one of 12 elite archer coaches in the U.S. for the Junior Dream Team (JDT) for five years. He bears a small resemblance to the actor Aaron Eckhart and speaks with the confidence and precision of an archer standing in full extension.  “I started the OPT program to give students—or trainees—a path of progression (to the Olympics) on a local level,” he said.

Between 10 and 20 archers are currently in the exclusive program. To land a spot on the team, students must be able to shoot a minimum qualifying score of 250 out of 300. The test is essentially the equivalent of hitting a 20-yard target, about the size of a thumbtack, in the center 25 out of 30 times.
“It’s nothing like you see in the movies,” Alford said of the sport. “This is competitive archery that will take you to the Olympics if you pursue it to the fullest. Not that this isn’t fun, it’s just that, here, you have a goal. You don’t see any Olympic archers on TV.”

Alford’s current extracurricular project: constructing a 70-meter practice archery range in his parent’s backyard. Practice for competitive archers, Meyers said, is measured in arrows, not hours. OPT archers shoot close to 100 arrows a day while the best archers—the resident athletes at the Olympic Training Center—shoot around 300 arrows a day. 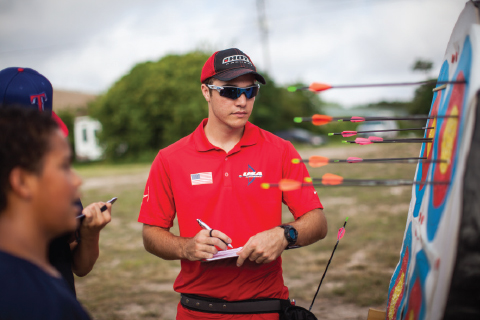 Meyers got addicted to the sport of archery at the age of 12 and started competing when he was 14. “Archery was a freedom for me as a kid. It was something away from school and away from home. It was something that was all mine,” Meyer said. “To this day, it’s very empowering to stand there on the line and be able to shoot and not worry about anything else.”

Myers said athletes who are in love with the work are the ones who advance to the Olympics. “They’re all about the journey,” he said. “They’re not worrying about the result. They’re not picturing the podium.”

As a coach, Myers tries to instill that work ethic in his OPT trainees, and he’s put together an appropriately challenging program. “If one is going to run a competitive program, you have to make sure that the training is tougher than the real thing,” he explained. Athletes training in the OPT program log at least an hour a day of practice, six days a week, and compete in local or national tournaments on the weekends. For archers new to the OPT program, Meyers said he has them stand in front of a full-body mirror and flex red TheraBands back and forth for the first month of training. Then, he lets students practice with a light bow before building weight in two-pound increments.

“It’s a gradual process, but it pays off,” Meyers said. “It’s just like any other strength and conditioning process. Before we build strength, we have to get the form right. Then we can start activating and strengthening the right muscles.”

For cross training, Meyers recommends trainees lift light weights for strength, practice yoga for flexibility, and get involved in activities such as running, cycling, or sculling for cardio. “That’s for the physical training though,” he said. “Then there’s the mental aspect of the sport.”

There’s the conscious mind (picking up the bow), the sub-conscious mind (taking the shot), and the self-image (what you’re thinking in-between shots). “It’s really easy to form self judgment after a shot, because you see your result right there on the target,” Meyers said.

Mistakes aren’t a point of judgment, though. It’s necessary to make them to build awareness. “It’s important to know yourself enough to know how to keep your thoughts positive,” Myers said. “Along with form and strength, you have to know how to talk to yourself properly if you want to succeed.”

As the field of competitive archers continues to become more selective and competitive—the U.S. Men’s Archery team won a silver medal in the 2012 London Olympics—Meyers feels more responsibility as a coach.

“Ideally, I’d like to teach myself out of a job,” he said. “There is going to be a day when I’m not going to be at my students’ tournaments. I try to train them so they know what’s expected at those higher competitive levels. That way it will be easier for them later.”

When Is It OK for Kids to Cycle Alone?