I was on a bike ride with Katy Dooley in 2008 when she announced that she wanted to swim the English Channel after our Ironman training was finished. I was thinking to myself, “Isn't this hard enough? We're training for a dang Ironman! What more do you want?!” What came out of my mouth was, “Of course you will. I know you can do it. You are amazing!”

That was the first audible seed that Dooley planted about her long-range goal of becoming a marathon swimmer. It was also the first time I thought, “OK, this chick is totally off her rocker” while pondering what it actually meant to swim from England to France. A few seconds later, we heard a gunshot in the distance. Actually, it wasn't in the distance; it was too close for comfort, and we ducked and almost fell off our bikes to hit the deck. We both heard the bullet cutting through the leaves on the trees above us.

It was a stark moment that, in a split second, went from a fantasy of dreaming big to utter survival instinct. We still laugh about that day and debate whether it was an intentional “let's see how fast you ladies can pedal” warning or some skeet shooters with poor aim. Either way, what happened that day, ironically, has become a metaphor for the last few years of Dooley's life and training. It has been a consistent contrast of dreaming big and depending on survival instinct. Dooley has proven beyond the shadow of a doubt that you can still set impeccably high goals and reach them, regardless of age.

From early childhood through her college years at the University of Texas, Dooley grew up as a competitive swimmer. She has always been incredibly gifted and disciplined in the pool, but she never thought about swimming as fitness. “It was just something I did and it came naturally to me,” Dooley explained. As an adult, she took time away from the water to focus on other things: relationships, family, and career. She’s an employee at the Corporation for National and Community Service where she does program development. The organization works with nonprofits and public agencies developing AmeriCorps VISTA and Senior Corps Programs. It's a career she loves, since it focuses on addressing and improving communities. Dooley also spent many years excelling in other sports, such as marathons and triathlons (including two Ironman-distance triathlons), before returning to the water in a big way in 2010. And now, at the age of 46, Dooley is in the best shape of her life, both physically and mentally.

Yes, Dooley successfully completed her English Channel crossing in 2012. But in the process, she also went on to complete the Triple Crown of marathon swimming: the Catalina Channel swim (2011), the English Channel crossing (2012), and the Manhattan Island Marathon Swim (2013). Completing these three events places her in a unique club, one of only 69 people in the world to have achieved the coveted Triple Crown.

How does she juggle the rigorous training with work and her social life? “Training is fun for me because my training life is also a part of my social life,” Dooley explained. She keeps close social ties to many competitive swimmers, runners, and triathletes. “We all love what we're doing and can't imagine life without these activities,” she said. These friends, she emotionally asserted, have provided immeasurable support during the last five years of training and racing. Every long swim and race requires a large support crew, including kayakers and observers, whose sole purpose is her safety. “I have been surrounded by amazing people who have sacrificed time and money so that I can be successful,” she said. This support includes shifts of kayakers and swimmers on training swims over what she describes as “a gazillion” weekends over the last three years. “I would send an email looking for volunteers, and friends always stepped up to help. They believed in me even when I didn’'t.” The support from her boyfriend Calvin, friends, and family is overwhelming to Dooley, who readily admits that she couldn't have accomplished her goals without their selfless kindness. “Suffice to say,” she noted, “I have gratitude times a million.” Friends and loved ones also traveled to her races and cheered loudly from the support boat as she hit the shore with every race.

Support is certainly vital to Dooley's success, but she also credits her coach, Whitney Hedgepeth, for preparing her both physically and mentally for the rigors of training for 20+ mile swims in adverse conditions. One thing Dooley understands now is the importance of quality workouts over quantity. She listens to her body and takes rest days between tough speed sessions in the pool. When she set her initial sights on the English Channel crossing, many coaches and mentors suggested the Catalina Channel crossing as a training race. “I trained my longest and hardest for the 20.2 mile Catalina swim,” she recalled, establishing a huge base of mileage and also working on the mental side of swimming long. Training swims included multiple three- to six-hour swims each weekend. The swim starts at night off Catalina Island in California and, although she was anxious, Dooley carried the motivating words and support of her coach with every stroke. “Whitney always encouraged me to accomplish my extreme goals. She is attentive and positive, and her workouts are second-to-none,” explained Dooley. “On Mondays, when I would come back to the pool, she always asked about my long weekend training swims. She knew exactly how to motivate me.” In fact, Hedgepath’s words before Catalina—and each subsequent swim of the Triple Crown—resonate daily with Dooley. “When your coach tells you they have no doubt in your ability to complete a swim, you believe them,” she said.

Each swim certainly presented its own set of unpredictable challenges, and it's impossible to say that one was more difficult than another. Before her 2011 Catalina crossing, there were big surf warnings, and people were not allowed in the water. She was afraid her swim might be cancelled but it wasn’t, and they started in the dark. Imagine beginning a 20.2-mile ocean swim in the dark of night with only the guidance of a lone tugboat and kayaker next to you. Support crew had to toss her liquid nutrition to her on a rope since she was not allowed to make physical contact with any of the volunteers or boats. Wetsuits in these races are also illegal, making cold-water training a must. She finished the Catalina crossing in 9:49. Yep, that's nine HOURS and 49 minutes. 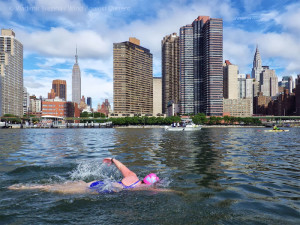 The English Channel is notoriously cold, choppy, and unforgiving. To prepare for this 21-mile swim, Dooley gained about 30 pounds of weight and spent countless hours swimming in the coldest water she could find, including the 60-degree waters near Mansfield Dam in Austin. Once in England, the event date actually spans a week-long window, which is based on the tides, so swimmers don’t know exactly when they’ll get the call to start—they essentially fly to England and wait. Talk about nerve wracking. Dooley got the call, once again, to start at night. “I wanted to quit three hours into that swim because I was so seasick due to the choppy waters,” she remembered, “but a marathon swim is long and your perspective changes many times throughout the miles.” Dooley completed her goal of crossing the English Channel that fall in a time of 11:16, making her one of the fastest women to do so in 2012.

“I didn't even know what the Triple Crown of swimming was until I started learning more about marathon swimming,” explained Dooley. “My initial goal was the English Channel and by the fall of 2012, I had completed two of the three events.” The remaining swim was the Manhattan Island Marathon swim. Dooley had previously done this swim as part of a relay in her training, so she decided to apply in November 2012 after the English Channel. Her application was accepted, and she successfully swam 28 solo miles around the Island of Manhattan this past June in a time of 7:44. Only 11 of the 39 competitors successfully completed that race, due to cold water temperatures (in the fifties) and fast tides. Dooley placed fifth overall and second among women.

This type of success requires not just physical training but an incredible amount of mental training as well, which Dooley believes is equally important to creating a successful event—as well as a successful balance in work and life. She spent countless hours outside of the pool visualizing the perfect swim. She examined videos and photos of the starts and finishes so she’d know what they would look like. “Visualizing the finish helped me believe that I would be successful,” said Dooley. “It doesn't necessarily mean that I didn't have bad mental days, but I never let go of that focus.”

It's this focus that has made Katy Dooley such a success and inspiration to others. She is the epitome of being “fit over 40” because that concept extends beyond just physical shape. “The concept of fitness and making healthy choices has become more important to me,” said Dooley. “There is a balance in my life and I'm more invested in taking care of myself physically, mentally, and spiritually.” Her next goal? She heads back to dry land with a 100-mile run around the Florida Keys in 2014. What started as a dare to raise money for her Manhattan swim charities turned into a full-fledged race with many of her endurance friends. She has swimming goals, too , including Lake Zurich and the Straits of Gibraltar (Spain to Morocco). “I like to have something on tap because it motivates me to wake up every day and be fit, healthy, and happy!”

Thankfully, Dooley hasn't had to dodge any real bullets since that day on the bike, even though she dodged a few virtual ones to achieve her Triple Crown of swimming. Katy herself is a bullet in the water, and these days, she's the one calling the shots.