It’s as Easy as Riding a Bike 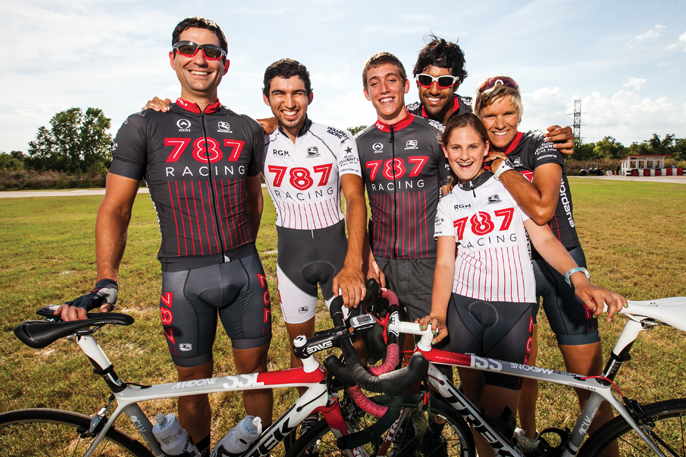 It’s a childhood rite of passage to learn to ride a bike. Even before the training wheels are removed, parents understand the joy, freedom, and positive health benefits of their children being able to explore local trails, commute to school, or simply ride around with friends.Many parents, however, might be unsure of how to help children who are interested in racing their shiny new road bikes, or who’ve shown a particular aptitude for beating their friends down the local mountain bike trails. Fortunately, Austin has a growing number of resources devoted to helping children explore their athletic potential through cycling.In the sport of cycling, anyone between 10 and 18 years of age—a “junior,” in cycling parlance—can compete in events sanctioned by the governing body for the sport, USA Cycling. This includes all types of bicycle racing, including road and mountain biking, as well as other disciplines such as track cycling and cyclocross. (An exception to this is the cycling portion of a triathlon, however, which is overseen by USA Triathlon, whose rules allow competitors as young as 6 years old.)

At most bike races, junior cyclists have separate age-based competitions, allowing them to compete against their peers. Juniors are also eligible to compete in the skill-level based “category” races with similarly experienced cyclists of any age. All racers start in the lowest category, and upgrades are given to those who have demonstrated their proficiency by performing well against others in the same category.

As with any sport, racing bikes requires certain equipment and skills. In addition to a bike, young racers need an approved helmet and the correct clothing. Depending on their age and skill level, cycling-specific shoes and pedals may be desirable as well. Lastly, any juniors wishing to compete need a USA Cycling license, and—of course—signed permission from their parents.

The skills necessary to race any bicycle successfully are learned through training and mentorship. In Austin, the 787 Racing team provides both as part of its core mission to support junior cyclists. As members of one of the top-ranked teams in the state, 787 racers are in a unique position to share their skills and tactics with the next generation of cyclists through weekly rides, monthly skills clinics, and support at the many road and mountain bike races across Texas.

Carson Lange, 17 years old, agrees: “I have the privilege to be mentored by [787 cyclist and founder] Robert Biard. He’s shown me the value of team work as well as being supportive with my cycling.” Lange hopes the hard work will pay off—he wants to follow in the footsteps of another 787 junior, Trevor Brooks, who received a cycling scholarship to Fort Lewis College in Durango, Colorado.

The 787 Racing team also recognizes that developing athletes need solid equipment and professional support. As a nonprofit organization, 787 and its generous sponsors offer subsidized bike parts, helmets, clothing, and nutrition to all juniors. While it’s common for elite amateur cyclists to have coaches, 787 Racing has taken a step further and worked with Chann McRae Coaching to offer free coaching for all of the team’s juniors.

“Coaching is not just about improving performance,” notes professional cyclist, coach, and mother Jen McRae. “Coaching also reduces the chance of injury and ensures that cyclists don’t become burnt out through overtraining or too much racing.”

Of course, all of the preparation and hard work needs a venue to showcase it. For road racers in Austin, the weekly Driveway Race Series brings hundreds of cyclists of all skill levels together every Thursday night. Held on a closed course designed for auto racing, the Driveway is a popular place for introducing juniors to road cycling. The series offers two completely free weekly races for juniors: one for ages 10 to 14, and the other for ages 14 to 18.

For more advanced juniors, like 18-year-old Robby Ketterhagen, the skill-based races are the real challenge. “I’m racing against some fast people,” he explained. “Last week, we had a guy who raced the Tour of California in the field, and the week before, the New Zealand national champion. Where else can say you raced against people like that?”

For juniors who like to play in the dirt, there are numerous opportunities to race mountain bikes as well. The Texas High School Mountain Bike League offers a number of major races at venues across the state, such as Reveille Peak, Rocky Hill, Cameron Park, and Bluff Creek. Additionally, juniors looking to race alongside mountain bikers of any age can avail themselves of any of the skill categories at either of the weekly Dirt Remedy races held at Emma Long Metropolitan Park or the regular Dirt Derby races at the Austin/Del Valle Motocross Park.

Ketterhagen, who also races mountain bikes, agrees. “When I started racing mountain bikes,” he said, “I would only do the Dirt Derby. Now that I race for 787, I’ve done harder races, too, like the Leadville qualifier at Rocky Hill.”

Regardless of the type of racing, it’s fulfilling to see young athletes learn the joy of competition and develop healthy lifestyle habits that will serve them well throughout their lives.

B. Shiva Mayer, 26, is a member of the Board of Directors of 787 Racing. A native of British Columbia, Canada, he has lived in Austin for nearly five years. An avid road and mountain bike racer, Mayer has competed extensively across both the United States and Canada. For more information about 787 Racing or junior cycling in general, he can be contacted at shiva@787racing.org.