Alexis DeJoria: Living life to the fullest in the fast lane

You’re beautiful, young, fit, and have a dad who’s one of America’s wealthiest businessmen. You could easily follow in his footsteps, continuing in the family business that has brought fame and some four billion in fortune. Or you could absorb the lessons learned at his knee about living life to its fullest, recognize your passions, and branch off from the family tree to write your own success story. The latter is the course of Austin-area resident Alexis DeJoria. She’s a nationally ranked Nitro Funny Car racer and the daughter of John Paul DeJoria—the co-founder of Paul Mitchell Systems and Patrón Spirits.

DeJoria grew up in California and, at one time, thought she might earn her living working for Paul Mitchell Systems, but when she was 16 years old, she attended her first race in the Mello Yello Drag Racing Series and was immediately hooked on Nitro Funny Cars. What are Nitro Funny Cars? In a nutshell, they’re drag racing vehicles with a forward-mounted engine (dragsters have the engine in the back) and a fiberglass or carbon fiber body that tilts up in the back. Using a high-performance fuel mix of 85–90 percent nitromethane (CH3N02, once used for rocket fuel) and 10–15 percent methanol, these cars represent readily available models (currently, the Ford Mustang, Fiat S.p.A.’s Dodge Charger, and the Toyota Camry).

Once she’d caught the bug, DeJoria knew that she wanted to race, and she was willing to work hard to get there. She decided to study at the famed Frank Hawley’s Drag Racing School in Gainesville, Fla. While training, DeJoria kept her famous name secret, and she raced her way up through the ranks. In 2005, she started in Super Gas, driving a Corvette Roadster and progressed to the Super Comp division in a rear-engine dragster before she began racing in the Top Alcohol Funny Car division. She then built her own team, Stealth Motorsports, one of the few National Hot Rod Association (NHRA) teams owned by a woman, which she operated for three years.

DeJoria loves to try something new, and she proudly rolled out a motocross bike from the family’s well-stocked garage: “It’s a Honda 250F, built by my friend Chad Geib out of La Vegas. He builds bikes for a few of my friends who are Pro Freestyle MotoX riders.” DeJoria went on to describe herself as a “casual rider, but I’ve tried jumping recently and love it!” Photo by Brian Fitzsimmons.[/caption]

There aren’t many women in drag car racing. “It’s been a ‘guys town’ for so long,” said DeJoria. Aside from her talent and willingness to work, DeJoria’s reaction to a frightening car crash at Englishtown in 2009 did much to give her the “real deal” credentials to propel her into the top division, Top Fuel Funny Car. Englishtown is DeJoria’s favorite place to race—she described the New Jersey location as “green and lush, really beautiful, and yet so close to [New York] City life”—but on that day, a horrified crowd watched as her parachutes snapped away, leaving her car to crash into the barriers off the track at some 200 mph. Clearly shaken, DeJoria walked away from the totaled car, thanks to safety measures put in place following racer Scott Kalitta’s 2008 death at that very track. In 2011, DeJoria became the second woman in history to win a national event in the Top Alcohol Funny Car division and formed a partnership with Kalitta Motorsports, owned by Scott Kalitta’s family and team of legendary racer Shirley Muldowney—the other woman to win a national event in NHRA’s Top Fuel division. Muldowney is often called “the First Lady of Drag Racing,” and she is the only person, male or female, to have won two and three Top Fuel titles (1977, 1980, and 1982). “[Muldowney] kicked ass,” said DeJoria, admiringly, as she listed off the women in drag racing. “Courtney [Force], Brittany Force, Erika Enders-Stevens—she’s in stock car racing and is a good friend…” DeJoria sees drag racing as becoming more and more a sport that women are enjoying and participating in.  “I think it’s a generational thing,” she suggested.

There’s a fitness component to drag racing that today’s women embrace, and DeJoria takes advantage of the home gym that she and husband Jesse James (an auto enthusiast in his own right) have created in the sprawling ranch house on their 19-acre property just outside Austin. A row of large windows lets in the natural light; a wall of mirrors keeps DeJoria honest in her form as she moves among the weight machines. She does a one-hour circuit training session five days a week when she’s home, but she mixes it up—“I like to trick my body every couple of days.” Her trainer when she lived in California was Ray Kybartas, whom she described as “an amazing guy,” and she’s modeled her regimen after the work they did together (Kybartas is known for training several of Hollywood’s elite—though he doesn’t like to share their names, Madonna, Sean Penn, and Steven Seagal are on the list). She starts on a treadmill to warm up, moves to weights and cardio, and often adds in sets of step-ups. DeJoria laughed that, no matter how she trains, her arms always stay the same, but her legs “get beefy.” Like many, she battles a sweet tooth; like everybody who travels for work, she deals with the stress of being on the road. In racing season, DeJoria and team hit 24 cities over the course of nine months, staying about a week in each location. That can wear on a body.

It’s important that DeJoria stay in shape for racing; those Funny Cars have around 10,000 HP and can achieve 6G acceleration from a standing start. “You’re fighting the car all the way down the race track,” she explained. So, she works her forearms a lot. “They’re really tested when you drop cylinders,” DeJoria explained. Each limb has a function in the car, and DeJoria has a “practice tree” set up so that she can keep her reactions sharp in the off-season.

As DeJoria readies for her third season as a pro driver in the Funny Car division, she switches from easy going to determined when asked about goals for the year. “We’re going in the right direction,” she said. “My team has developed a good base line, and now we’re going to focus on winning. We’ve worked out a lot of bugs, and the new body from Toyota is fantastic. First year, we were top 13; this year [2013], top 12—next year, top 10. It’s going to happen.” In 2013, DeJoria and the Kalitta Motorsports Tequila Patrón Toyota Camry Funny Car team finished the season in 12th place with 991 points.

For all her rock-and-roll vibe, DeJoria is a bit of a country girl. The family, which includes DeJoria’s daughter and James’ three children, raises pixie pigs and collects eggs from their chickens. They’re eco-conscious; the acreage is supplied with well water, and property utilizes a wind turbine to completely power James’ workshop: “I’d love to get another to power the house and get off the grid.” Photo by Brian Fitzsimmons.[/caption] 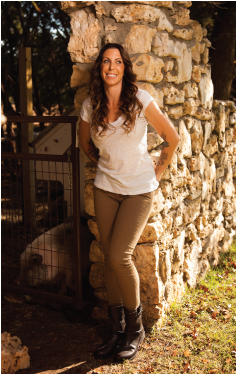 There’s a real sense of exuberance when DeJoria talks about racing. She loves the energy, the sound, the feel. She credits her dad with helping to develop that love. “I always thought he was a badass driver,” she laughed.  He’s a big fan; John Paul DeJoria can be seen in episode 8 of the 2013 video series on DeJoria’s website celebrating her performance in the semifinals at Las Vegas, where DeJoria raced and provided a—free—mammogram van available to her female fans. He sounded the proud dad when he said, “It’s pretty exciting to have a daughter who appeals to everyday drivers as well as superstar drivers…she walks a very fine line between being a mom, a super race car driver—very passionate—and helping change the world.”

That passionate outlook fuels DeJoria in all aspects of her life. When asked if she worried about the risks involved in sitting atop a giant transmission and hurtling down a track at more than 300 miles per hour, she shrugged and stated flatly, “You can get hurt just driving your regular car. I think it kind of evens out—you just never know [what’s in store].” She referenced her dad’s influence again when she discussed her philosophy that there are two types of people in the world. “You choose who you want to be,” she said. “You can live life like a clam and make it safely to death, or you can live like an eagle on top of a mountain.”  DeJoria wants to live fully, something she wants to teach her children: “I want them to experience life and not be fearful.”

#PassMeChallenge Recap: 3M Half Marathon Reminds Runners How Great a Race Can Be

Where to Play Golf in Austin